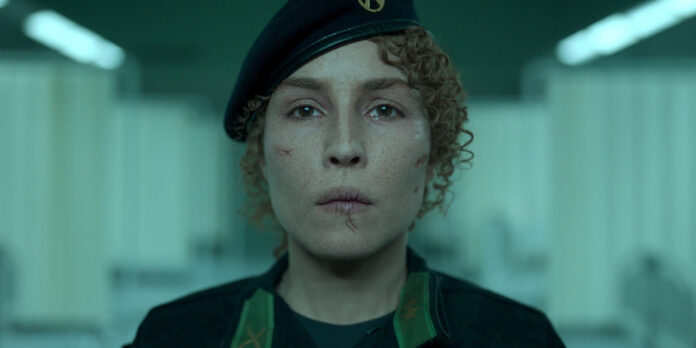 THE STORY – In a post-apocalyptic world, six soldiers on a covert mission must transport a mysterious package across a frozen archipelago.

​Given that the world has spiraled into what has felt like a never-ending state of the apocalypse these past few years, it can be an odd topic to broach in films these days. The public has experienced the state of anxiety and panic that surrounds a global catastrophe in a way that is no longer the foreign concept that was dreamed in the realm of fantastical science-fiction. The reaction to such events in the media has taken an entirely new perspective. Still, that does not mean these stories lack value in certain thematic exploration, and that combination with intriguing spectacle is where a fine film can be delivered. For “Black Crab,” the setting is one that attempts to present nice crafts while also struggling to deliver an emotionally impactful narrative.

The events depicted happen sometime after a great war has broken out, leaving most of the world a damaged place. Details are vague, but the landscape is a scarred, desolate wasteland filled with refugees and battling soldiers. Caroline (Noomi Rapace) has been recruited along with other infantry members to be sent on a secret mission. Their side is losing this war, and the last-ditch effort is to cross an icy terrain that will lead them to an important enemy base. That is where they will employ a deadly package that will hopefully give them an upper hand. Her reluctance is thwarted by the promise of reuniting with her daughter, giving her the incentive to tackle this dangerous trek. Along the way, this team must survive the harsh elements, lethal enemies, and inner turmoil before revealing an even more significant threat that jeopardizes more than they could have possibly imagined.

A vital piece to creating an effective cinematic environment, particularly one that takes place in the near future, is to meticulously assemble the aspects of world-building to give the sense of a textured and authentic reality. Sadly, much of that is an elusive concept for director Adam Berg and co-writer Pelle Rådström. The specifics of what started this warfare are opaque, with seeming intention, but this choice only exposes the unclear stakes within the film’s foundation. The barrage of faceless enemies only serves to emphasize what little characterization is provided overall, which of course, stunts any genuine poignant connection that could be formed with these individuals. The set-up is familiar, and knowing right away that most of this group will be expendable is never rectified by the film’s tone. The stale writing persists throughout the runtime, leading to an exhausting third act that feels more like an extended epilogue featuring a predictable conclusion.

Despite the failings in the script, Berg does find moments to implement some finely composed tension. These scenes are most successful when the perspective closes in on more intimate settings, narrowing the objectives and more clearly defining motivations. Some of the set pieces are stilted, but others are an impressive display of adequate filmmaking. The highlight is undoubtedly the production design, which actually captures the aura of decay and dread with a vivid sensibility. Even the episodic nature of the unfolding plot moves swiftly along so that momentum is not interrupted. Once the inciting incident is past, the film is much better equipped with its small-scale excursions. It’s only slightly passable but engaging nonetheless.

As stated before, there is not a whole lot for this ensemble to grab onto and make their performances memorable. Rapace is the only one given anything dynamic to play with and the degrees to which she makes an impression rest entirely on her own natural talents. She conveys a steely exterior that acts as scar tissue covering a damaged core. There is a genuine empathy that Rapace exudes, which elevates her significance far beyond the page. The only other actor who comes anywhere close is Jakob Oftebro as the team’s ranking lieutenant. He’s given some scenes that showcase a shady personality that unmasks a sensitive portrayal. Still, he’s not as distinct a persona as Rapace, who herself just manages to make her character salvageable.

“Black Crab” had the potential to amass a harrowing survival tale in a brutal climate that was buoyed by a captivating tone and riveting performances. Instead, it squanders this premise by indulging in dreary aesthetics, shallow characters, and tedious writing. Still, at times, one cannot help but be drawn into the plight, and a handful of sequences embody a rewarding experience of tense action. With Noomi Rapace carrying nearly the entire piece, the film is an incredibly flawed yet somewhat engrossing work. It is not exemplary of this genre that exploits dystopian habitats, but it mobilizes just enough facets to warrant a satisfactory result.