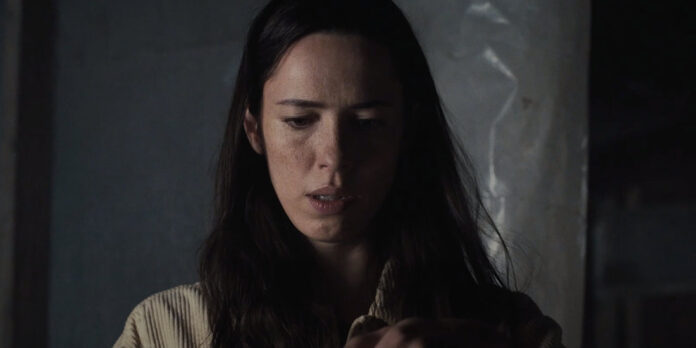 THE STORY – Reeling from the unexpected death of her husband, Beth (Rebecca Hall) is left alone in the lakeside home he built for her. She tries as best she can to keep together-but then the dreams come. Disturbing visions of a presence in the house call to her, beckoning with a ghostly allure. But the harsh light of day washes away any proof of a haunting. Against the advice of her friends, she begins digging into his belongings, yearning for answers.

In the wake of the suicide of a loved one, a million questions swirl around one’s mind. What went wrong? What could I have done? How will we move forward? “The Night House” explores how these often unanswerable questions can haunt a person, becoming a ghost unto themselves, pushing us to the brink of our own sanity. Director David Bruckner’s spine-tingling horror film from Searchlight Pictures is a chilling meditation on grief and depression that never gives easy answers to these questions.

We first meet Beth (Rebecca Hall) on the day of her husband’s funeral after he took his own life. Owen (Evan Jonigkeit) shot himself on a boat in the lake behind their house, leaving Beth with a cryptic note and no answers as to why he suddenly did what he did. The emptiness of their giant, gorgeous home on the lake begins to feel like an echo of Owen himself, haunting Beth as she tries to return to life as usual. Every night, she senses a presence in the home, hears voices and loud thumps in the night, and even receives texts from her deceased husband on her phone. Even as the terrifying experiences ramp up, Beth wakes up disoriented each morning, leaving the audience to wonder what’s real and what’s imagined by her own trauma. Brilliantly edited, the jarring cuts between the night and day help sell Beth’s paranoia. Does her husband haunt her, or is she just asleep, hiding away from the painful reality of the world around here.

The strange signs and occurrences increasingly become too much for her to ignore. Beth begins to investigate the intricacies of Owen’s life. She could believably be losing her mind, or she could be genuinely experiencing the ghost of her husband. Hall gives one of the year’s best performances and possibly even the best of her already stellar career. Few actresses could pull off the balancing act of “The Night House” as she does. With every bit of tension resting squarely on her shoulders, she excels at this sort of role; it’s understated, never manic or over the top, and contains a surprising amount of dry, dark humor to lighten the mood when the story becomes overwhelmingly bleak. We sense the immeasurable weight of pain that Beth is carrying, the life that’s slowly draining from her, but Hall fills her with a relatable determination to find answers.

While “The Night House” succeeds at preserving a sense of mystery, the rules of the story are increasingly unclear. The audience is kept in the dark for too long as to what exactly is going on, leaving us more confused than intrigued. Thankfully this confusion is outweighed by an impeccably disturbing visual and sonically enveloping sense of style. Bruckner (“The Ritual”) draws the audience in with an absorbing, ominous atmosphere that holds us in its grasp. Numerous moments will make you jump out of your chair, but Bruckner prioritizes an environment filled with dread and anticipation over easy scares. Elisha Christian’s inventive cinematography plays with shadows unexpectedly, creating a ghost out of Beth’s home through optical illusions and clever camera trickery.

As Beth tries to find answers to what may be haunting her, she discovers hints of Owen’s secret life. She finds architectural drawings of their house but with a reversed floor plan. She stumbles across pictures of women who look startlingly like her on Owen’s phone and searches to find out who these women could be. Alongside Beth, the audience experiences things that appear supernatural, yet we don’t know if we can trust what we’re seeing. Sarah Goldberg and Vondie Curtis-Hall play the empathetic friend and neighbor, respectively, who try to keep Beth grounded as she slowly loses her grip on reality. Both are great in their roles, but their presence makes the story feel all the more conventional, making sure the audience captures the necessary exposition.

Digging into the past of a lost loved one to find the fine line between grief and paranoia can be a dangerous route to travel down. As is too often the case, the questions are more compelling than the disappointing answers or lack thereof. “The Night House” near-perfectly encapsulates this into a thrilling experience, even if it may not stick with you long-term due to its underwhelming plot that is masked by evocative craftsmanship and a subtle, captivating central performance from Rebecca Hall. Still, this solid psychological horror film will unnerve you and engage you in a surprisingly emotional way.