The Multiverse: What Is It And Why Do We Love It? 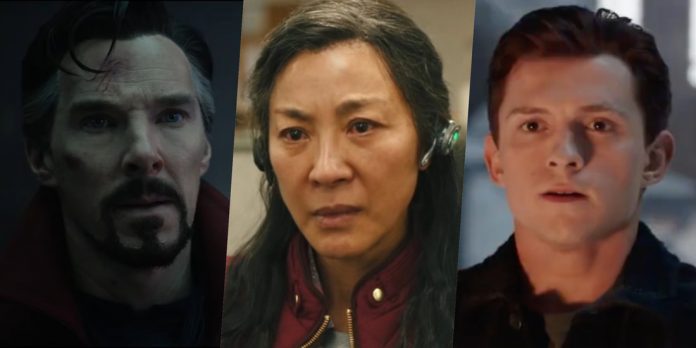 The multiverse is in right now. Three major films have already, or will be, featuring the concept: “Spider-Man: No Way Home,” “Everything Everywhere All At Once,” and “Doctor Strange in the Multiverse of Madness.” We can also include the first season of “Loki” and 2018’s “Spider-Man: Into the Spider-Verse” in this discussion. Basically, everyone cannot get enough of the multiverse. Why is that?

​Since ancient times, the multiverse has been a concept in theoretical science and philosophy and has been included in comic books for years. But it is only becoming prevalent in modern cinema and television in recent years. Its incorporation into the MCU (Marvel Cinematic Universe) is sure to bring the idea front and center, especially with the success of “Everything Everywhere All At Once” only adding more evidence that this multiverse passion is not just for comic-book audiences. But when you think about it, adapting the multiverse seems to be the natural next step for both comic-book adaptions and science-fiction.

The concept of the multiverse consists of an unlimited number of parallel universes existing simultaneously, meaning; there are different versions of one base universe that are slightly different in one way or another. This slight difference can mean that a character can have various obstacles and challengers in their path but are essentially the same at their core. Therefore, the characters’ nature is the same, but their experiences differ, which is an alluring foundation for a story based in the science-fiction genre. Here, creators can play with established or singular characters and wonder how their journey could and would change.

As mentioned above, this is a natural progression for the science-fiction genre. Since their inception, time and space have always been exciting concepts for the genre. Within the 70s, 80, and 90s, science-fiction was populated with the concept of time travel, where characters would hop from one time to another and (usually) change their timeline due to their actions. Think of “Back to the Future,” “The Terminator,” “Bill and Ted’s Excellent Adventure,” to even “Looper.” These films center around either changing the future or maintaining the status quo. Marty (Michael J. Fox) accidentally comes in the way of his teenage parents’ first encounter, endangering his very existence; a machine army sends a Terminator (Arnold Schwarzenegger) to kill the mother of their enemy before he is even conceived, and in the sequel Sarah (Linda Hamilton) attempts to kill the man who will one day create that machine. All these films, in one way or another, revolve around how one decision or action can change the entire timeline, which is a really engaging story because it asks the question of control. Do our choices matter? And if we could change our future, would we?

But, one can take only so many ideas with time travel, especially since it relies on a circle of time. Therefore, it can get really old really fast. So naturally, artists build on ideas to create something more stimulating and interesting. Since then, we’ve seen films that consist of time loops where characters are stuck in a specific period of time and have to learn or change something in order to get back into the “real” timeline (“Groundhog Day,” “Happy Death Day,” & “Palm Springs“). We’ve also stories that center around reincarnation and past lives where the same characters find each other in different lives (“Bram Stroker’s Dracula,” “The Fountain,” “Cloud Atlas,” etc.). But these films still consist of independent timelines. Even with stories that include parallel and multiple timelines, they never interact with one another. But over in the comic-book world, they were.

​Most of the time, the multiverse is technically (especially when it comes to Marvel comics) the result of time travel. Still, it isn’t uncommon for different universes to interact with one another. The majority of the MCU specifically phases one through three, exist within the main timeline of Marvel comics, which is called Earth-616 (this number has even been referenced in several MCU films and marketing campaigns). Within Marvel comics, there are different types of multiverses, but generally speaking, there are several stories where two or more universes are present, with one of them being Earth-616.

So what makes a multiverse story entertaining? The abundance of possibility and character. What would happen if The Hulk encountered nuclear energy? What if most of our heroes were villains? Who would win if the X-Men fought The Avengers? These are fascinating concepts for decades-old characters. There’s a famous saying that “nobody stays dead in comics” (apart from Uncle Ben) because characters always come back in one form or another, and one of those ways is through their counterparts within the multiverse. Plus, the stakes are higher. Heroes are not just saving the world anymore; they’re saving an entire universe.

Some of the most famous Marvel multiverse stories have already been (successfully) adapted or are in the process of adaptation. “House of M” seems to be the primary source of inspiration for Emmy nominated “WandaVision” and “Doctor Strange in the Multiverse of Madness,” Oscar-nominated “Logan” was inspired by “Old Man Logan,” and “X-Men: Days of Future Past” (inspired by the comic issue of the same name) made $233 million at the domestic box office. Why? For all the reasons mentioned above but also because the multiverse ties into the (not so new) wave of nostalgia. Audiences love characters from the past, and they don’t want to say goodbye to them. Over the last decade, we’ve seen many reboots, spin-offs, revivals, and “requels” of already established intellectual property (“Star Wars” sequel trilogy, “Jurassic World,” “Terminator: Dark Fate,” the “Halloween” sequels, “The Matrix Resurrections,” this year’s “Scream.” The list literally goes on and on). But we’re getting a bit of fatigue from this formula. A massive draw for “Days of Future Past” was watching the original X-Men with the reboot cast. What’s better than Tom Holland, Andrew Garfield and Tobey Maguire sharing the screen as their versions of Peter Parker (and the box-office numbers prove it) in “Spider-Man: No Way Home?” General audiences don’t like a whole reboot with entirely new characters or their beloved characters being completely sidelined, and the multiverse is a phenomenal middle ground. Additionally, with Disney’s acquisition of Fox, the idea of incorporating the original and reboot X-Men and Fantastic Four cast into the MCU is now possible. So it makes perfect sense for this to be Kevin Feige’s next route. It’s playing directly into the general audience’s hands.

It’s natural to think of alternate avenues our lives could have gone, especially after the last two years of navigating a global pandemic. All of our lives were on a specific path and then quickly deviated due to COVID-19. Therefore, general audiences can now easily relate to the idea of another version of ourselves existing in their own separate reality where one event didn’t exist. What would have happened? What could have happened? How much would have changed, and how much would have stayed the same? Those “what if” questions and concepts about choice vs. fate are interesting, as are themes that fit perfectly within a multiverse-type story. It’s entirely possible the multiverse may be a natural step in science-fiction and comic-book adaptions, but it is also serving as Hollywood and artists’ reaction to the last five years where we were living in unprecedented event after unprecedented event. Life has been challenging, and we are in desperate need of escapism. Therefore, the idea of a character having a completely different life yet still being the same familiar character that we know at their core seems highly comforting at the moment. Only time will tell if that theory is correct. But one thing is for certain: the audience’s in this universe, at least for right now, are obsessed.

What are your thoughts on the concept of the multiverse? Do you like how it’s being shown in cinema today? Are you looking forward to “Doctor Strange in the Multiverse of Madness” and have you seen “Everything Everywhere All At Once” yet? Let us know in the comments section below or on our Twitter account.