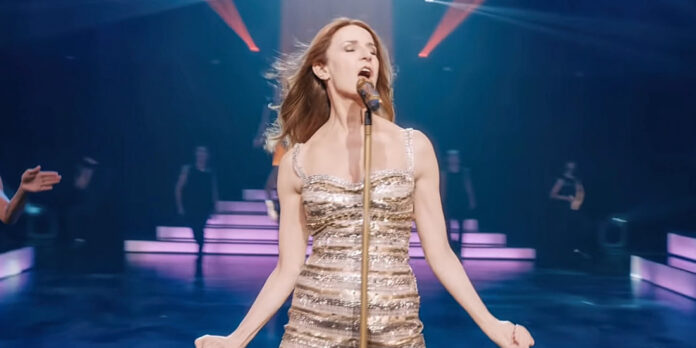 THE STORY – With the support of her family and the man she loves, the 14th child of a modest family will become the most famous singer in the world.

​​​​​​A film about a gifted Canadian singer and unconventional beauty whose out-of-this-world voice touches hearts on a global scale could only be inspired by one person: Céline Dion. Directed by Valérie Lemercier and co-written with Brigitte Buc, “Aline,” in the director’s words, is a “musical dramedy that’s freely inspired…” by the life and career of the superstar. The two-time César Award winner directs, writes, and acts out the life of Aline Dieu that reflects Dion’s, but with liberties that allow her the creative freedom to make this story her own and make events more cinematic while still being respectful to its inspiration. Having this be an unauthorized look at an icon makes it feel surface level at times, but it provides a clear picture of the triumphs and struggles of stardom. The film, above all, is about “the voice of love,” as the poster states. It’s a love between mismatched, star-crossed lovers but also the love between an artist and her audience.

Lemercier introduces Aline Dieu – fittingly named because Dion truly is a God – fancifully as she lays out on a super king-size bed surrounded by marble. This contrasts with her poor upbringing. Money was scarce for most, with families living in homes built by the very people who lived there. While impoverished, the Dieu family were a happy bunch in a home full of humor and music. As the youngest of 14, Aline absorbs all the family’s talents as she watches from below the stage at the “Dieu Family Band.” The first time she sings is at her eldest brother’s wedding, and it’s clear that her voice is one of a kind. When her family sends a tape of Aline singing to a music manager named Guy-Claude (inspired by René Angélil and played by Sylvain Marcel), he can’t believe that voice is from a girl just twelve years old – and he’s moved to tears.

Her rise to fame is quick, but she always remains self-assured in her talent and incredibly at ease in front of big audiences. Even though, at times, she’s still just a kid having fun, she’s made to grow up fast, singing more “grown-up” songs and getting her crooked teeth fixed. She performs in Paris, her album sells out at the Vatican, and she goes on her first extensive tour. Always at her side is Guy-Claude, whose vision, mixed with her ambition, creates sparks that ignite the path to her becoming one of the greatest singers of all time and what also begins a journey of love. “Aline” is as much about the love story between her and Guy-Claude as it is her career. We see her take Vegas by storm in a 14-year residency, struggle to become pregnant, and the scare that she may never sing the same way again. There are many trials and tribulations that come with fame, but she finds success professionally and personally, in love, and as she becomes a mother. But, as we all know, there’s loss in her life, too, and she must find the strength for her heart to go on.

The film moves very quickly despite its two-hour runtime. Aline’s later career, with all her big performances, feels to take precedent over her early career, which would have been great to explore deeper – get a sense of what young Aline felt about it all. Dion’s spirit is so strong, but at times, the film remains surface level, not really getting too deep into her character by presenting what we already know. One exception is the inclusion of her mother Sylvette’s (inspired by Dion’s mother Thérèse and played by Danielle Fichaud) feelings about Aline and Guy-Claude, hinting at the friction Dion’s relationship with Angélil could have caused. Her confrontations with him over her daughter’s romantic feelings are hilariously written as she calls his dick a big “brioche.” But we also learn that he never made a move, was sweet, and only acted on Aline’s terms, which sounds very much true. He feared for her career and how the public would respond because of their age difference, but she didn’t care.

And in the end, her fans didn’t either. Lemercier invents scenes like Aline escaping through the streets of Las Vegas because it’s something you can imagine a person under pressure doing, but all the true bits, like Aline being named after a song her mother heard, Aline disliking “My Heart Will Go On” or simply casting Québécois actors to portray her family, bring authenticity to a piece about a real figure presented under the guise of a fictional one. But while providing an inside look into Dion’s transformation through Aline, the crazy, fun singer with all her quirks and comedic way of storytelling rarely shine through, not fully capturing the personality of the singer the film is really about.

Something that may surprise many is how successfully the 57-year-old Lemercier manages to not only play Aline at the height of her career but also at ages 5 and 12. She embodies the awkwardness and innocence of youth, but the talent of those behind the scenes really helps Lemercier pull it off. For the scenes of Aline at 5, the camera is kept at a distance, and her head remains turned (most likely using a body double) in closer shots not to turn off the audience. The props around her are also sized larger to help make it seem like Lemercier is way more petite than she is, like the microphone she uses when she first sings or even the chair she sits on when she meets Guy-Claude was designed to make her appear small. Cosmetic touches like false teeth and her costumes also help to differentiate between ages. It also helps that Dion always seemed much older than she was when she sang, and the film is full of hits and lesser-known works by the artist, all lip-synched by Lemercier and dubbed by Victoria Sio (who does an uncanny Dion). The director and star give an energetic, incredibly passionate, and emotional performance as the film goes through Aline’s highest highs and lowest lows.

Lemercier’s love for Dion is felt in every frame, and having it be, in many ways, a fictional piece, allows it to become something much more unique than other biopics could be. While not perfect, she speaks of her character, Aline, as an ordinary woman who goes through hardships like the rest of us. How, despite giving so much of herself to her audience, her love for them will go on. Hitting the ultimate high note at its finale, Aline embraces the courage to keep singing when it feels like all is lost – something Dion, too, can be admired for.