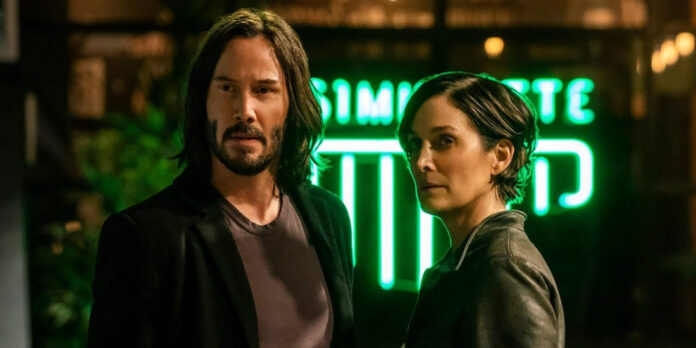 THE STORY – To find out if his reality is a physical or mental construct, Mr. Anderson, aka Neo, will have to choose to follow the white rabbit once more. If he’s learned anything, it’s that choice, while an illusion, is still the only way out of — or into — the Matrix. Neo already knows what he has to do, but what he doesn’t yet know is that the Matrix is stronger, more secure and far more dangerous than ever before.
​
THE CAST – Keanu Reeves, Carrie-Anne Moss, Yahya Abdul-Mateen II, Jessica Henwick, Jonathan Groff, Neil Patrick Harris, Priyanka Chopra Jonas & Jada Pinkett Smith

​There is a particular breed of filmmaker in this world in which the release of a new project of theirs demands a special sort of attention. Many employ methods to craft an engaging narrative that is celebrated by legions of fans. Still, very few can offer a deeper analysis of not only their own stories but of the culture surrounding their films. The results can often be met with a divisive response, but such a wide range of opinions only fuels the discussion further. The Wachowskis have consistently operated in this space from the very beginning, and their legacy tied to “The Matrix” and its subsequent sequels have been a source of vigorous debate on every level. The hunger to return to this world has never dissipated, and nearly twenty years after the last entry, Lana Wachowski (sans her sister Lilly) dives back into the pool with “The Matrix Resurrections.” Like many previous efforts from these storytellers, what’s presented is a fascinating array of thought-provoking ideas whose execution is inconsistently effective.

Not much is known at the start of the film, but one can see that Neo (Keanu Reeves), after having sacrificed himself to end the war with the machines, is now seemingly alive and well. However, he is not touring around the gritty decks of the Nebuchadnezzar nor sporting his stylish shades and dark coat. He has re-assumed the role of Thomas Anderson, now the creator of a highly successful video game called The Matrix. The company and his boss (Jonathan Groff) are pushing for a new entry, but Anderson can’t move beyond the stressors in his life. Sessions with his analysis (Neil Patrick Harris) don’t seem to help much either, but chance meetings with a woman named Tiffany (Carrie-Ann Moss), bearing a striking resemblance to Trinity, has him intrigued. He eventually gets pulled back into the world he was once familiar with and again must not only face the external forces of control but also wrestle with his own sense of identity and destiny.

Given there’s been so much time between the release of “The Matrix Reloaded” and “The Matrix Revolutions” with this entry, the world has had the luxury to contemplate their feelings on the entire trilogy throughout the years. While the follow-ups were seen mainly as disappointments compared to the towering achievements of the first film, the discourse has shaped a new perspective of appreciation for the ambition on display. It’s an element that is so present here that Lana Wachowski cannot help but comment on these topics within the actual text. The film plays out a real-time argument to justify its own existence, constantly referencing the in-universe video game as a direct analogy to the franchise itself. The weight of expectation, the fear of failure, and the chance to re-contextualize past decisions for a new future are all inherently interesting concepts. With co-writers David Mitchell and Aleksander Hemon, Wachowski expands the mythology that is designed to reveal the intricate layers that fill out this established world. The minute details are thrilling to discover, and the commentary is alluring.

At the same time, as welcomed as this self-aware dissection is, the delivery of such subjects is often blunt and heavy-handed. The conversations contain little nuance, and while undoubtedly intentional, it robs the material of an elegance that could have been more stimulating. There’s almost no chance of misinterpretation as to the targets in this thesis, and when the film does find value in a more opaque approach, the outcome can be muddled from a character perspective. These aggravations are only exacerbated by stilted set-pieces that are severely lacking in vitality and inventiveness. Wachowski’s films are always a calibrated balance of profound storytelling explorations and captivating action scenes, and, unfortunately, the former is never consistently invigorating, and the latter is regrettably dull.

Reeves and Moss slide back into familiar roles and capture the inner strength that made them so compelling to begin with. They also manage to infuse a vulnerability that feels more prescient this time and colors an added layer of depth that’s unique for this film. Neither is truly exceptional, but both are a grounding anchor that is quite soothing, particularly as it relates to their intense love story. The rest of the ensemble is mostly filled out by newcomers whose effectiveness varies. There are some genuine highlights in the form of Groff and Harris, both indulging in a delightful menace that is completely engrossing. Jessica Henwick and Yayha Abdul-Mateen II have an appealing screen presence but are saddled with sadly ill-defined characters and are mostly flat. The other tagalongs are filled out by talented actors, several from the gifted “Sense8” ensemble, but they leave little impact otherwise.

The final product that is “The Matrix Resurrections,” ends up becoming a grand experiment of mixed conclusions. There’s no denying the aspiration to create a story that revels in both provocative themes and thrilling large-scale entertainment. Lana Wachowski often achieves this objective, aided by a rapid flow of the pace and a brilliant score from Tom Tykwer and Johnny Klimek. At the same time, the explicit revelations can often stifle the potential of this evolving world-building, and the poorly constructed action sequences are the most damning of all. Still, there are a handful of intriguing performances, and the foundation laid down is one that is gripping even if such ideas do not always coalesce into a satisfying whole. One should expect nothing less from a Wachowski project at this point, no matter what history from before may be attached. That is what keeps this filmography vibrant and fresh even when the overall work is quite flawed. The same is absolutely applied here. A constant question in “The Matrix” is questioning our own sense of purpose, and it’s fitting that such a concept is applied on every level imaginable here. It is simultaneously enchanting and frustrating, a mood that should come as a shock to no one.