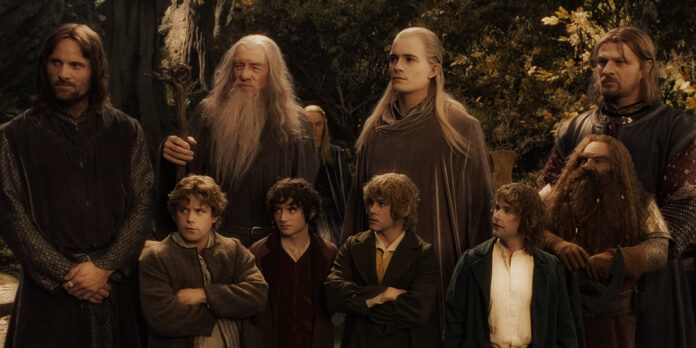 THE STORY – The future of civilization rests in the fate of the One Ring, which has been lost for centuries. Powerful forces are unrelenting in their search for it. But fate has placed it in the hands of a young Hobbit named Frodo Baggins (Elijah Wood), who inherits the Ring and steps into legend. A daunting task lies ahead for Frodo when he becomes the Ringbearer – to destroy the One Ring in the fires of Mount Doom where it was forged.​
​
THE CAST – Elijah Wood, Ian McKellen, Liv Tyler, Viggo Mortensen, Sean Astin, Cate Blanchett, John Rhys-Davies, Billy Boyd, Dominic Monaghan, Orlando Bloom, Christopher Lee, Hugo Weaving, Sean Bean, Ian Holm & Andy Serkis​

Earlier this year, the Library of Congress chose “The Lord of the Rings: The Fellowship of the Ring” to be added to the United States National Film Registry for being culturally, historically, or aesthetically important within cinematic history. It’s hard to deny that the 2001 epic adventure film was a milestone achievement both in popularizing fantasy for the mainstream and for its revolutionary filmmaking techniques, which transported audiences to a whole new world and made them care about the characters and the story. Today, the first installment of Peter Jackson’s “The Lord of the Rings” trilogy remains as beloved as it was when it was released twenty years ago. The screenplay by Fran Walsh, Philippa Boyens, and Jackson is based on the 1954 novel of the same name by J. R. R. Tolkien. The first film in the trilogy would be followed by “The Two Towers” the following year in 2002 and “The Return of the King” the next year in 2003. Put together, the three comprise one of the strongest film trilogies ever made (maybe even ever?), but as a standalone film, “The Fellowship of the Ring” remains an impressive feat by itself.

“The Lord of the Rings” is an accomplishment in adaptation, striking a delicate balance of bringing enough information from Tolkien’s work without overwhelming the audience, who are mostly experiencing this world for the first time. “The Fellowship of The Ring” opens with a critical prologue, narrated by Cate Blanchett, introducing the viewers to the world of Middle Earth. It shows the creation of the all-powerful One Ring and the battle subsequently fought over it by the legions of the dark lord Sauron against an alliance of men and elves. After Sauron’s defeat, the ring was lost for centuries before being found first by a creature called Gollum (Andy Serkis) and then by a Hobbit named Bilbo Baggins (Ian Holm).

“The Lord of the Rings” is filled with unusual names, made-up words, and dense lore. The film has a lot of heavy-lifting to do in terms of world-building, but it’s handled so well that there are very few other films that can claim to have done as good of a job as Jackson and his team did here. Having the prologue at the beginning allows Jackson to get the vital information regarding the ring, its origins, and the evil presence of Sauron out of the way, so it doesn’t cloud the start of the narrative journey while still being engaging. It can be challenging to keep track of all of the characters’ names if you’re new to the series, but it’s a natural occurrence with any sort of epic fantasy property.

We’re then introduced to a wizard named Gandalf (Ian McKellen), who arrives in the Shire, the peaceful, lush land of the Hobbits, to celebrate his friend Bilbo’s 111th birthday. However, when he learns that the Hobbit is in possession of the all-important ring of power, he assigns Bilbo’s young nephew Frodo (Elijah Wood) the task of getting it out of the Shire. Sauron wants the ring for himself to achieve his full physical form (he’s taken the form of a lidless eye engulfed in flame), ultimate power, and cover all of Middle Earth in darkness, so it is of the utmost importance that Frodo does not let it fall into the wrong hands.

Along his journey, Frodo collects many companions, from his loyal best friend Sam (Sean Astin) to the elven archer Legolas (Orlando Bloom) to a dwarf named Gimli (John Rhys-Davies). Frodo, his three Hobbit companions (the before mentioned Astin, and Billy Boyd and Dominic Monaghan as the comedic pairing of Merry & Pippin), and other races from Middle Earth, including two men, an elf and a dwarf, make up part of the nine-man titular Fellowship of the Ring, those who have pledged to see the item to the land of Mordor, in the fires of Mt. Doom, the only place where the ring can be destroyed. He is also helped by the elven Arwen (Liv Tyler) and lady Galadriel (Cate Blanchett).

“The Lord of the Rings” is an overwhelmingly male property, with few female characters. Yet the women who do appear hold their own with no problem, asserting themselves as equals to the men in every way. But an absence of women does not mean a lack of tender relationships, as the close friendships and bonds that the men share are one of the hallmarks of the series. It’s a unique showing of non-toxic masculinity as the men openly express their trust and affection for each other, even embracing freely, making for an emotional experience whenever any of them are put in peril.

The large ensemble cast is impressive not only in breadth but also in talent. Wood is an excellent lead, with his wide-eyed naivete and determination in the face of overwhelming forces hunting him down, including nine terrifying riders dressed in black known as the Ring Wraiths. Viggo Mortenson is another significant standout as the ranger and warrior Aragorn, portraying both his heroic stance and his more tender moments perfectly. His natural charisma and exceptional skill with a sword inspire devotion, making him a natural leader, even if he’s reluctant towards it. Ian McKellen received a well-deserved Oscar nomination for Best Supporting Actor for his work in the iconic role of Gandalf, to which he brings a sense of gravity, wisdom, and warmth to every line delivery.

In addition to being a beautifully epic story filled with likable characters, “The Fellowship of the Ring” is a marvel of filmmaking. The movie was filmed alongside its two sequels in New Zealand, with the team building an insanely high number of practical sets and blending old-school filmmaking techniques with the latest advancements in visual effects. In fact, the first film uses its CGI sparingly, favoring practical effects in conveying the size difference of Hobbits and dwarves towards the other characters and placing the characters in environments that couldn’t possibly exist. Still, through the use of highly detailed miniatures and some incredibly dedicated work behind-the-scenes to bring Tolkien’s world to the big screen, they do. This awe-inspiring level of craftsmanship is stunning, which is breathtaking both in its beauty and realism, perfectly captured through the late Andrew Lesnie’s sweeping cinematography, which takes us on a journey unlike any other through environments that feel of this world but not at the same time. Aside from the production design and special effects, the film boasts outstanding makeup work (particularly with the orcs and goblins), stunt work, and editing (which is highly commendable for a three-hour movie). The score by Howard Shore helps create the epic feeling of adventure and excitement while incorporating angelic moments of beauty, making it one of the all-around best cinematic film scores of all time. Through all of it, Jackson’s laser-focused direction and grand vision shine through, particularly for his ability to create something so coherent out of such a large amount of source material and lore.

“The Fellowship of the Ring” is arguably one of the most influential films ever made, both for its cultural significance and achievements in design and craft. Like “Star Wars” a few decades before it, Jackson’s trilogy inspired a whole new generation of movie lovers who were able to lose themselves in Tolkien’s world. Iconic lines like “All you have to decide is what to do with the time that is given to you” or memeable lines such as “One does not simply walk into Mordor” have entered the cultural lexicon and the franchise propelled all of its actors towards future stardom. But what has made “The Fellowship of the Ring” stand the test of time, over the past two decades, isn’t the genuinely gorgeous craftwork or its strong performances, but its heart and its all-important messages about the power of camaraderie in the face of pure evil and that even a small person can make a big difference.