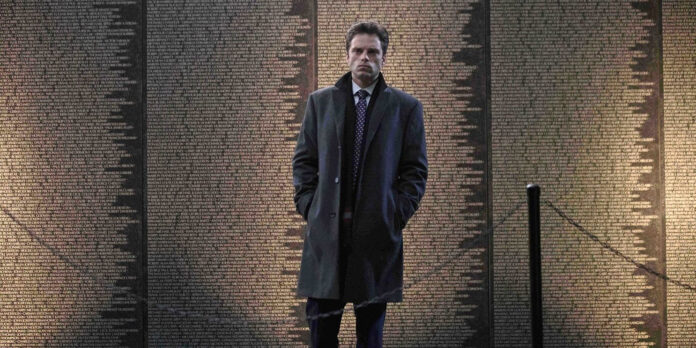 ​​Much has been made of the endless parade of movies that focus on the subject of war. They are usually the showcase of strong technical filmmaking from noted auteurs, and that has found a lot of success as of late. What has been seen less these days are the stories that continue after the fighting is done, and what new mission and purpose those who served now find themselves battling. These continued stories can be just as thrilling as the wartime escapades, or they can be a tedious exercise that struggles to engage. This film does fall more on the latter side, but there’s definitely an earnestness to it that does make one seek to appreciate the emotional catharsis it attempts to reach.

“The Last Full Measure” takes its inspiration from a true event, one concerning William Pitsenbarger (Jeremy Irvine). Pitsenbarger was a member of the Air Force Pararescue team, and on one fateful day in April 1966, he personally saw fit to rescue the lives of dozens of men who were under heavy enemy fire. More than thirty years later, many of the veterans he saved have continued to advocate for issuance of the Medal of Honor for his actions, even after he perished in the fight. It falls onto Scott Huffman (Sebastian Stan), an ambitious Pentagon staffer that gets sidelined with the task. He’s reluctant at first, but as he discovers more about the bravery that was shown that day, he begins to forge a deeper bond with these men and their determination to see the proper honor bestowed upon their fellow soldier.

Something that strikes one immediately while watching the film is that this isn’t an exercise in flamboyance. The storytelling here is quite straightforward and rarely ventures beyond the sight of showcasing these actions in a manner that has little style. To that end, there’s nothing about writer-director Todd Robinson’s skills as a filmmaker that lead one to assume incompetence, but it doesn’t conjure up the notion of creative vision either. His presence here feels very workmanlike. At best, that doesn’t provide a distraction from the interesting procedural, but at worst, it drags the film through many scenes that feel bloated and unnecessary. These moments come about one too many times, and eventually, it takes its toll.

At the same time, there’s no denying the pure spirit the film embodies in wanting to pay homage to a great American story. These types of indulgence will be effective to different groups of people, but the film deserves credit for creating the right circumstances in which the rousing notion of appreciating heroic acts is sincerely felt. The emotional manipulation is still there, undoubtedly, but the tactics do find a way of working and are well executed. This is particularly felt towards the end of the film when suddenly the lack of flash from the direction actually serves the thematic elements quite well. It’s a use of tricks that have been seen before, but they are employed in an effective manner nonetheless.

Sebastian Stan is one of those actors who hasn’t really been given a lot of opportunities to show his range as an actor. In fact, if it wasn’t for his endearing turn in “I, Tonya,” there would be little evidence to suggest he has much to showcase at all. Unfortunately, this role is yet another that doesn’t ask much of him as a performer. He does his job well enough as the central figure, transforming from a cynical Washington bureaucrat to a true believer in this cause. However, it’s a familiar arch that Stan doesn’t really make all that unique with his performance. He’s serviceable, but nothing about him here comes across as anything exceptional.

In all honesty, it’s the supporting players that impress much more than he does. The cast is rounded out by a stable of respected veteran actors from the likes of William Hurt, Ed Harris, Christopher Plummer, Samuel L. Jackson, and the late Peter Fonda. All of them are quite effective in their ability to infuse the film with some powerful drama, even when their screen time is limited. The emotional depths these characters face are quite compelling, and even when the degree of the effectiveness may vary, it’s still appreciated that such a talented group of actors can still deliver.

There are plenty of flaws one could point to within “The Last Full Measure.” There’s no sense of nuance or particular creativity, and the mundane nature of the filmmaking often leads to tedious moments. However, there’s still a heartwarming charm the story carries with it, and that indulgence is something quite endearing. Even though the lead protagonist isn’t that interesting, the supporting characters around him do quite a lot to create that emotional investment, and the combination of these successful elements does make one appreciative of the overall tone. There are much better films out there that deal with the aftermath of war and how the actions of a few touch the lives of many. Yet, even when the film is being deliberately sentimental, it finds a way to work in enough places that it can be admired.