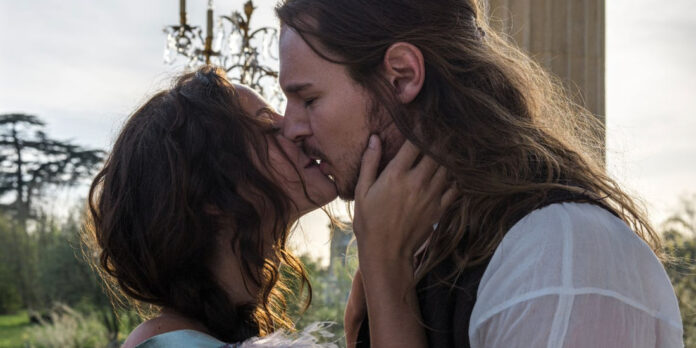 ​”The King’s Daughter” feels like a time capsule – not to France in 1684 when the story is set, but to 2014 when the movie was filmed. It’s been held by the studio for the past seven years, supposedly because of additional work on the special effects though they certainly don’t look like they’ve been worked on for months, let alone years. It’s unclear why the studio finally decided to release the film, but many will surely think it would have been better off never seeing the light of day.

Sean McNamara crafted a film that would have felt dated even when it was initially meant to be released in 2015. It feels distinctly like the adventure-fantasy films of the 2000s, from the look of the visuals to the fantastical story. Barry Berman and James Schamus adapted Vonda N. McIntyre’s 1997 novel “The Moon and the Sun” into a piece that seems geared towards young audiences without much that they will find engaging.

“The King’s Daughter” opens with a storybook and the words “Once upon a time,” letting us know that despite the title card telling us that the year is 1684 and that Louis XIV is the longest-reigning monarch, this is more a fairytale than a historical drama. It does beg the question of why they felt the need to claim it was set in a specific year and about a specific king when nothing else they do in the film seems influenced by either of those choices.

Julie Andrews provides a few minutes of narration, introducing us to a king (Pierce Brosnan) searching for immortality after an assassination attempt and his secret daughter (Kaya Scodelario), who has been raised in a convent by the sea, unaware of her own heritage. Now a young woman, she is brought to court and given a job as the king’s composer, for she is as musically gifted as she is unconventional.

Knowing that the film was made in 2014 makes its narrative that Marie-Josèphe is “not like other girls” make more sense, but it’s still a bit grating. Meanwhile, the King’s doctor (Pablo Schreiber) has told him that sacrificing a mermaid in a specific ritual will grant him immortality, and he sends a sea captain (Benjamin Walker) to capture one. Of course, when Marie-Josèphe comes across the mermaid in the enclosure built for her, the pair immediately bond.

The rest of the film tries to cram a lot of plot into its modest 97-minute runtime, from a predictable love story (including a kind of love triangle) to lots of arguing about the upcoming procedure between the king’s doctor and his priest (William Hurt). Hurt and Brosnan’s banter is actually one of the better parts of the film, though only Scodelario gives a good performance. Try as hard as she might, though, she still can’t save the movie.

There are a lot of perplexing design choices, starting with the long wigs on most of the men, including Pierce Brosnan. The costumes and makeup are defiantly anachronistic with strapless dresses, modern black suits, and smoky eyes; it looks like a mix of department store prom dresses, pirate cosplays, and an attempt at early twentieth century costuming. This might all be a bit more forgivable considering the film’s fantasy element (and this coming from someone who even warmed to the Free People dresses in the television series, “Reign”) if the costumes were at least visually pleasing, but they are almost all eyesores.

The costuming looks even worse because the sets and scenery are excellent, filmed partially on location at the Palace of Versailles. It’s hard to understand why they bothered going to the trouble of shooting at Versailles only to ruin the aesthetic with such messy costuming. The score is often overbearing, and the cinematography is decidedly artless, but most of the other technical elements pale in comparison to the shoddy visual effects. The mermaid’s special effects are terrible, resulting in a somewhat off-putting creature, and are particularly bad anytime a human interacts with her. You would expect with a film that spent this long on the shelf that they might have touched them up before releasing it.

Other questionable choices are being made, too, most noticeably in how women of color are utilized in the cast. The mermaid is played by Chinese actress Fan Bingbing, perhaps a nod to the film having received a hefty investment from a Chinese film company, and Marie-Josèphe’s lady-in-waiting Magali is played by Black actress Crystal Clarke. After meeting Marie-Josèphe, Magali asks if she was also taken from her parents, causing several questions for the audience about what sort of status we’re supposed to assume the young woman has.

After finding out that her new friend’s parents decided to leave her (or so she’s been led to believe by the nuns), Magali says, “Trauma at the start of life often inspires greatness.” Not only does this create a question of if both the women of color we see in the film are in positions of captivity, the idea that childhood trauma somehow creates character is problematic.

Yet, the film somehow isn’t entirely irredeemable for all of its faults (and there are many). Perhaps it’s the humor of trying to figure out how exactly Pierce Brosnan went from being James Bond to playing a long-haired king in this sort of film, or maybe it’s just the nostalgia of a movie that feels like it was made even earlier than it was. Despite containing downright lousy design choices and a fairytale plot that barely comes together, “The King’s Daughter” is still moderately entertaining.