“THE KING OF STATEN ISLAND” 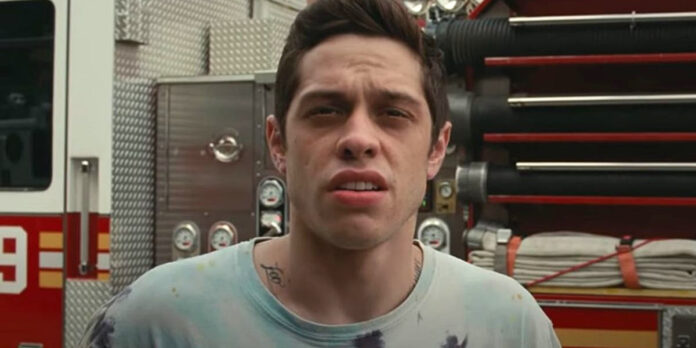 THE STORY – A semi-autobiographical comedy-drama about Pete Davidson growing up in Staten Island, including losing his father during 9/11 and entering the world of stand up comedy.

Judd Apatow has always had a knack for taking his ridiculous, over the top, misfit characters and infusing them with enough warmth and depth that we are easily able to relate with them as they go on their journeys. Whether it’s a 40-year-old geek trying to lose his virginity, or a downbeat stoner coming to grips with becoming a father, or a comedian who is going through a mid-life crisis, Apatow always manages to find the humanity within his characters, elevating his comedies beyond entertainment and into the profound territory. Not only has he done it again with “The King Of Staten Island”, but his latest might just be his best effort yet at peeling back the layers of his characters, breaking down our misconceived perceptions of them and finding something relatable and universal.

Scott (Pete Davidson) is a mid-twenty something year old, living at home with his mom (Marisa Tomei) and sister (Maude Apatow) in Staten Island. With no clear direction for where his life is heading, he spends most of his time smoking weed with his friends, occasionally drawing (pretty bad) tattoos on them (he has hopes of one day opening up a tattoo restaurant called “Ruby Tat Tuesdays”) and having empty sex with his friend Kelsey (Bel Powley), who wants him to truly commit to a relationship with her. Scott has never been the same since his fireman father died years ago when he was 7 in a fire and now, with his sister going off to college, the only person he has left in his life is his mom. However, that all changes when she starts dating Raymond Bishop (Bill Burr), who also happens to be a fireman. This enrages Scott, as he sets out to dismantle his mother’s new relationship. Antagonistic at first, Ray makes an attempt to form a relationship with Scott as he brings him to the firehouse and introduces him to his crew (including a wonderfully effective Steve Buscemi – who used to be a real volunteer firefighter). With not many choices left in his life, Scott reluctantly decides to work at the firehouse, where he might discover the true meaning of responsibility, the importance of heroes, and how to be open about his feelings.

Pete Davidson’s Scott is deeply struggling with how to properly function in society since the loss of his firefighter father at an early age. He’s not mentally ok, as he’s also struggling with bipolar disorder while living with his mom well into his twenties. These elements are all pulled from his own life story and he tackles his demons head-on, turning in a surprisingly dramatic performance that is equally as light-hearted, charming, and funny, as it is raw and emotionally vulnerable. It’s easily his best performance yet and will surely open up more doors for him in Hollywood to continue his acting career beyond SNL. Marisa Tomei and Bill Burr also turn in strong performances, with an equal amount of attention being paid to their characters as much as Davidson’s. Burr, in particular, leans on his angry New England persona to great effect as he executes perfect line deliveries with impeccable comic timing. And Marisa Tomei exudes the right amount of compassion for her son but also frustration, which allows the Academy Award-winning actress to once again remind us just what an underutilized talent she really is.

Whether it’s a therapeutic showcase role for Davidson or a tribute to local everyday heroes (in this case, firemen), “The King Of Staten Island” stays on course and never deviates due to the strength of its characters. I’m sure there will be some who will still complain that the film is too long and the story stretched too thin but I would argue that the time spent on developing the characters and thus, allowing the actors to deliver natural, and fully formed performances all attributes toward making “The King Of Staten Island” Judd Apatow’s best film yet. Without giving any spoilers, look no further than the final few minutes of this movie, where Apatow delivers his most considered ending yet, highlighting his growth as a storyteller and a filmmaker. It may not all add up to be his funniest film (there are still quite a few great laughs). However, in terms of writing, performances, sheer craftsmanship (Robert Elswit’s cinematography looks terrific and the film’s editing montages are all well placed) and storytelling, Apatow reminds us all why he’s the kind of modern-day comedy.