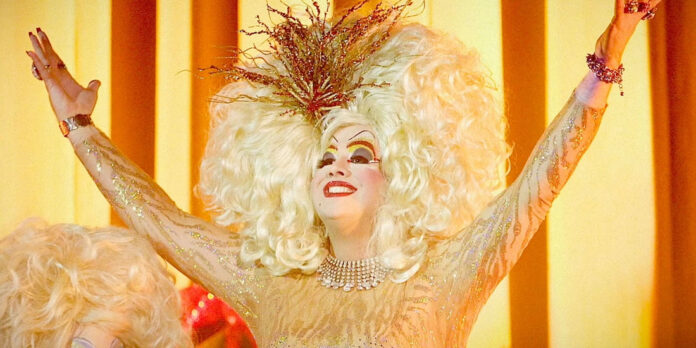 THE STORY – Paul Verhoeven’s Showgirls (1995) was met by critics and audiences with near universal derision. You Don’t Nomi traces the film’s redemptive journey from notorious flop to cult classic, and maybe even masterpiece.

​​​​​​I’m not at all ashamed to admit that I’m a huge fan of the movie, “Showgirls” – and not in an ironic so bad, it’s good kind of way. I genuinely think it’s an incredibly made social satire with deceptively strong direction, all hiding under the surface of a bombastic, erotic showbiz drama. I’ve long held the belief that the idiosyncrasies and “flaws” that many pointed out at the time of its release (exaggerated performances, nonsensical dialogue, a leering camera) are actually smart directorial choices that are saying as much about the audience that’s rejecting these elements of filmmaking as it is about the world the film is portraying. If all of the performances in a film are bonkers, it’s not an accident. In other words, I’m the perfect audience for “You Don’t Nomi,” a documentary that explores the legacy of “Showgirls,” gives evidence for its success as a film, and questions how we enjoy and critique art. And even though I found myself nodding along with a lot of the arguments and discussions the documentary presents, I can’t fully say that it fulfills its ultimate purpose of rescuing “Showgirls” from the trash can of culture into which it has been dumped.

The premise of the documentary is simple. In different chapters, it explores “Showgirls” as a film, both in the context of the time of its release and in the present day as an icon of underground cult films. The filmmakers interviewed fans and critics, but we only hear the audio from their interviews overtop of archival footage. The vast variety of clips we see are impressive, including clips from different films that are referenced, endless shots of terrible reviews, gatherings of appreciative fans at midnight film screenings, parodies of the film, and of course, clips from “Showgirls” itself. Most of the voices we hear are from people defending the film, either as an intentionally satirical work of art or as simply a campy and fun time, but we do on some rare occasions hear contemporary arguments against the re-contextualized praise the film has recently received.

For an unapologetic fan of “Showgirls” like myself, this will undoubtedly be an enjoyable watch. It’s fun and affirming to hear one’s unpopular opinions not only echoed but affirmed. The documentary has a lot to say about how we value different types of art, and why different viewpoints and subjects are often valued more than others by a mainstream audience. Its most effective argument for the success of “Showgirls” involves looking for context in the rest of its director’s filmography. It wisely points out that filmmaker, Paul Verhoeven, almost always sought to provoke and satirize American culture with his English-language movies of the 1980s and ‘90s. His satire and commentary were correctly identified and praised upon release of his male-centered films that use violence to make their critiques, such as “RoboCop” and “Total Recall”. But, as this documentary points out, when his satirical skills were used in “Showgirls” – a female-centered film that uses sex to make its critiques – suddenly critics and audiences couldn’t see the commentary and only saw a garishly bad movie. This documentary uses plenty of evidence from the film it’s exploring to make the point that it’s intentionally satirical. Its dissection of the multiple examples of visual symbolism and screenwriting motifs found in “Showgirls” makes it look like “The Godfather”.

So, yes, if you go into this documentary already converted to the Church of “Showgirls,” you will find a lot to enjoy. However, because this documentary presents all opinions on the film without taking an explicit argumentative stand, I have trouble believing that anyone who hates “Showgirls” would be convinced otherwise after viewing it. While it does use the aforementioned arguments to show the film’s value, it also gives equal voice to those who view the film as just a schlocky, enjoyable watch. The former argument is more convincing in terms of proving the movie’s worth as art, but because the latter argument is also used to try and prove the same point, the documentary’s overall purpose is a bit confused. I can understand why presenting all sides may seem like a more accessible option to reach the widest possible audience, but unfortunately, this means that anyone who hates “Showgirls” may view that filmmaking choice as further evidence that the film has correctly earned its reputation as an unfocused piece of trash lacking purpose beyond titillation.

If you love “Showgirls,” either as an intentionally-made masterpiece or as an ironically fun time at the movies, “You Don’t Nomi” will give you plenty of evidence for the next debate with your cinephile friends. But if like most people, you think it’s simply a bad movie, this documentary may do little to convince you otherwise.