“THE KINDNESS OF STRANGERS” 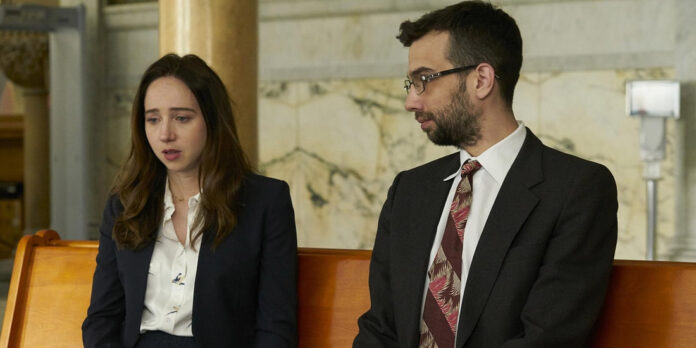 THE STORY – Ordinary, disparate strangers living in New York City go about their business. Clara runs away from her violent husband with her two boys and meets four people who are also going through difficult times. Alice, a nurse on the verge of cracking, Mark, accused of a crime he did not commit, John Peter, his lawyer, and Jeff, an unambitious man, find they are all connected as their paths intertwine.​
​
THE CAST – Andrea Riseborough, Tahar Rahim, Zoe Kazan, Bill Nighy, Caleb Landry Jones & Jay Baruchel​

​​​Lone Scherfig’s latest film, “The Kindness of Strangers,” seems to assert that it’s often strangers who are kinder to us than people that we know. It’s hopelessly dreary in the first two-thirds, only to wrap up with a neat and tidy happy ending. The film follows six people going through difficult situations whose paths cross in New York City.

Clara (Zoe Kazan) is a housewife from upstate New York who has fled from her abusive policeman husband with her two young sons. Alice (Andrea Riseborough) is a nurse who also volunteers at a soup kitchen and runs a support group themed around forgiveness. Jeff (Caleb Landry Jones) can’t seem to do anything right, getting fired from one job after another. Timofey (Bill Nighy) inherited his Russian restaurant, The Winter Palace, from his father but business isn’t going well. He hires Marc (Tahar Rahim), a former restaurateur – who recently got out of prison for a crime his brother committed – to run the place. John Peter (Jay Baruchel) is a lawyer and a friend of Marc’s who attends Alice’s support group hoping to come to terms with the cases he’s lost and the times he’s defended people he knew were guilty.

The lives of these people intertwine as their situations grow more precarious. Clara’s husband comes to New York looking for her, Alice considers quitting her job, and Jeff loses his apartment. As the title of the film indicates, it’s mostly concerned with the ways in which strangers help each other when those in their lives, like Clara’s father-in-law, won’t. For it to be partially set in a church, it doesn’t have a religious tone but focuses instead on kindness and forgiveness.

One thing that this film does well is shed light on the difficult plight of women in abusive relationships with cops. Their normal pathways to getting out of the relationship are cut off because of their husband’s role with the police, making their situation seem even more hopeless than it otherwise would. There’s only one brief scene of domestic abuse within the film, and while it is disturbing, it doesn’t involve children.

The cast certainly gives it their all, but it isn’t enough to keep this film afloat. Kazan, in particular, delivers a good performance, going between being dejected and forcefully optimistic as she tries to keep her children’s spirits up. Riseborough and Nighy are also bright spots in the film – Nighy does a hilariously performative Russian accent. The direction and editing are both adequate, but certainly nothing special.

However, the film seems to be unclear in what it wants to be. The first half is so hopeless that it’s impossible to enjoy, and yet everything is resolved and tied up in a bow in a way that doesn’t feel realistic. The romance plotline between Kazan and Rahim’s characters isn’t given enough time to develop and thus seems forced. It seems that the film would have been better centering around Clara’s story with the other characters as supporting roles, rather than trying to split itself evenly, keeping any one story from becoming too nuanced or detailed. The ending feels a bit abrupt as if they weren’t sure how to finish off.

It’s unfortunate that Scherfig seems to have misstepped with this film considering how great her other films like “The Riot Club” (2014) and “An Education” (2009) are. There’s certainly an interesting story about the difficulty that a policeman’s wife faces in removing herself from an abusive relationship; however, it gets mired down in so many interwoven plotlines and a frankly depressing tone that switches to hopeful on a dime. Unless you just really want to see another great performance from Kazan, you can skip this one.