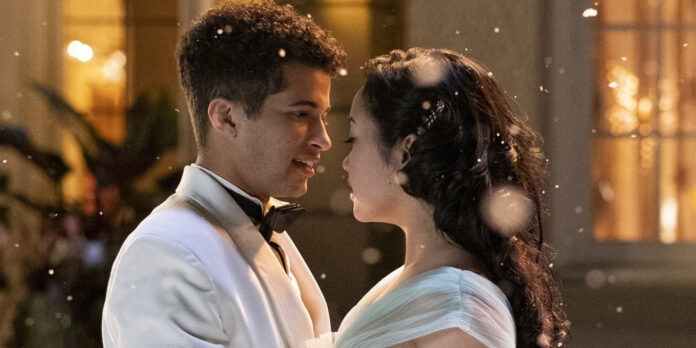 ​​​Based on the novel of the same name by Jenny Han,“To All the Boys: P.S. I Still Love You,” the sequel to “To All the Boys I’ve Loved Before” (2018), opens with Lara Jean (Lana Condor) back in her familiar, messy, teal bedroom singing and dancing to “And Then He Kissed Me” while trying on different outfits. It’s an homage to “Adventures in Babysitting” (1987) and plunges fans of the genre straight back into a story that they love so much. It’s nostalgia for idealized teen romance.

The first film ended with shy, hopeless romantic Lara Jean and lacrosse hottie Peter Kavinsky (Noah Centineo) deciding to date for real after faking a relationship following Lara Jean’s letters to her five childhood crushes being mailed out by her meddling younger sister, Kitty (Anna Cathcart). (A bit of advice: Don’t attempt to watch this movie without watching the first one.) Now, Lara Jean has her dream relationship, but love turns out to be a bit more work than she expected. Plus, the fifth recipient of those letters comes back into her life: John Ambrose McClaren (Jordan Fisher). He’s volunteering alongside Lara Jean at the local retirement center and is the same kind of “lame in a cool way” character as our heroine.

Sofia Alvarez has returned as a screenwriter after working on the first film and is joined by J. Mills Goodloe. There are definitely some changes from the books (including moving the setting from Virginia to Oregon), but they preserve a lot of great details like Lara Jean’s father’s new romance and Lara Jean and Kitty’s attempt to impress their aloof cousin by showing her a photo of Peter.

The film examines the question of what comes after the big John Hughes-esque moment of confessing your love on a lacrosse field. Lara Jean worries about whether or not her boyfriend wants to have sex, how to build trust between them, and if he’s still hung up on his past relationship with her former friend turned mean girl Gen (Emilija Baranac). She also frets about if their relationship can live up to her ideals of love, noting as they’re about to go on their first real date: “I’ve been thinking about this moment since I started reading romance novels.” This sequel continues one of the best themes established in the first film: How Lara Jean and her family cope with the loss of a wife and mother and how her father, Dr. Covey (John Corbett), deals with raising three girls.

The “To All the Boys” series is wonderfully diverse without it feeling forced. Two of the three leads of the film are actors of color. Like the books’ author, Lara Jean is Korean-American and in this film, we see her and her sister, Kitty, celebrating Korean New Year and wearing a traditional hanbok. Lara Jean’s white father is committed to making sure his daughters are kept in touch with their Korean culture and their mom’s family despite her being gone. There’s also a poignant scene in which Lara Jean’s gay friend (played excellently and non-stereotypically by Trezzo Mahoro) points out that she’s lucky to have so many options when it comes to boys, as there are only a few other openly gay guys at their school.

Condor continues to prove that she’s truly a talented actress. She manages to keep Lara Jean’s sweet optimism from seeming too saccharine as she tries to get through boy troubles without her mother to guide her. Centineo’s popularity sky-rocketed after the first film, causing Netflix to quickly create a swarth of rom-coms centered around him, but he proves that Peter Kavinsky is his best role. He nails that very specific type of lacrosse boy charm and has great chemistry with Condor.

“P.S. I Still Love You” has several new additions to the cast, most notably Fisher as John Ambrose. He creates a great contrast to Centineo and is perfect for John Ambrose’s quieter sort of charisma. This isn’t a love triangle where one person is the obvious winner; Fisher gives Centineo a real run for his title of “Internet boyfriend,” especially when playing the piano. Holland Taylor portrays Stormy, a feisty resident at the retirement center who takes a shine to Lara Jean. She plays the role with the right level of pizzazz without seeming like a caricature.

This is Michael Fimognari’s first film as director after working as a cinematographer for many years. You can easily tell his background from how beautiful many of the shots are composed; there’s a great baking sequence and an emotional scene set in an aquarium that stands out. This film continues on one of the most unique parts of the first film, Lara Jean’s imagined conversations with the people in her life, which is a lovely, whimsical touch. The design of the film is a cut above your average rom-com, with Lara Jean, in particular, sporting some great outfits, and the production design of the treehouse and the dance at the retirement center are both incredibly well done.

The great news for those who love this series is that the third film, “To All the Boys: Always and Forever, Lara Jean,” is already in post-production though a release date has not yet been announced. On the surface, it’s a story about a girl and her relationships, but at its heart, it’s truly a tale about sisters and finding your place in the world. In some ways, you can even say it’s a sort of modern “Little Women.” Netflix has cornered the market for this sort of fluffy rom-com over the past few years, but the “To All the Boys” series may be their best work in the genre.