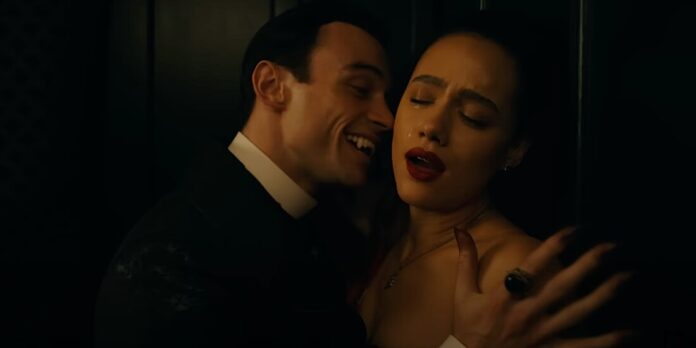 THE STORY – A young woman is courted and swept off her feet, only to realize a gothic conspiracy is afoot.

​Fans of Nathalie Emmanuel and her “Game of Thrones” character, Missandei, have been fervently waiting for her to find that next “perfect project” following the conclusion of the hit HBO series. And despite solid supporting roles in the “Maze Runner” and “Fast & Furious” franchises, no part yet has seemed to take advantage of all Emmanuel is capable of as an actor or given her that next iconic role. Thankfully, we recently heard word that she’ll be one of the female leads in Francis Ford Coppola’s “Megalopolis” – starring alongside the likes of Adam Driver, Forest Whitaker, Laurence Fishburne, and Aubrey Plaza – but given that there’s still some time to go before that behemoth of a film start shooting, what’ll tide Emmanuel’s supporters over until then? Sure, we’ve got one or two “Fast” movies left, but is that really all? Rest assured, because Jessica M. Thompson’s “The Invitation” has come along to offer Emmanuel the opportunity to fashion her own iconic “Final Girl,” and even though there’s not much here that you haven’t seen in countless other horror movies, thanks to a slick production and a solid lead performance from Emmanuel, it’s still worth a watch, and she makes the most of what’s been given to her.

A few months after losing her mother, aspiring artist Evie (Emmanuel) is lost and looking for a connection with something – someone – and finds herself compelled to take a DNA test to search for any relatives she may have never met. Shockingly, the results reveal that she has a long-lost English cousin named Oliver (Hugh Skinner), who is able to quickly visit her in New York, informing her about the rest of their family and inviting her to a family wedding taking place the following week. Initially skeptical, Evie soon accepts this all-expenses paid trip to the English countryside, quickly becoming acquainted with everyone and catching the eye of the charming family friend Walter (Thomas Doherty), who continually makes excuses to find (and flirt) with Evie throughout the entirety of her stay. However, the closer she gets with Walter, the more she draws the attention of the others – including an embittered ex-lover of Walter’s named Viktoria (Stephanie Corneliussen) – and soon, she’s completely immersed in his – and their – world of sinful secrets, setting her up for a fate that may be impossible to escape: one that may be eternal.

For starters, if you’re interested in this at all by that brief synopsis or Nathalie Emmanuel’s involvement and somehow still haven’t seen the trailer, DO NOT WATCH IT. Writer/director Jessica M. Thompson has specifically structured her film in a way that features a third-act twist that changes the game entirely, and the ad campaign has done her – and this film – a severe disservice by showcasing it. Especially since there’s so much else to be intrigued by that goes on well before that “surprising” reveal. Thompson is very skillful with her set-up here, doing the work (alongside an engaged Emmanuel) to make Evie a relatable and likable “Final Girl” and getting us invested in her emotional involvement with the events at hand (even the largest leaps in logic can be dismissed by accepting her desire to connect with the only family she has left) and later, in her rather ravishing romance with Doherty’s Walter. Some could say Doherty is a bit too young for the role (he’s 27, while Emmanuel’s 33, and an older actor might’ve added more “maturity”), but he’s plenty handsome nevertheless and a fantastic flirt, making it easy to see how and why Evie falls for him so quickly, and why she’s so easily lured into the trap that’s being laid for her here.

And that’s what most of the movie is for the first two-thirds – Evie and Walter living out their little love story… while things simultaneously go bump in the night. Now, “The Invitation” doesn’t rewrite the rulebook on horror films – you can sense when the scares are about to start, and parts of the plot can be predictable (it’s essentially “Get Out” meets “Ready or Not,” with an added genre element I shan’t spoil here) – but for the most part, save for a bit of a cheesy conclusion (with way too much CGI), it’s a slickly produced affair, with Thompson having an admirable control of atmosphere and mood and Autumn Ekin’s chilling cinematography supporting the foreboding feel of the surroundings. Some might like their horror stories to be a bit more subversive or “boundary-pushing,” but you know what? For a little over 100 minutes, “The Invitation” gets the job done. One wishes it ended a little stronger (though bonus points for the attempts at camp), but there are enough thrills and twists to keep audiences absorbed for under two hours. Above all else, it’s pretty fun to see Nathalie Emmanuel kicking ass and taking names in a rare lead role – where she’s meant to be.