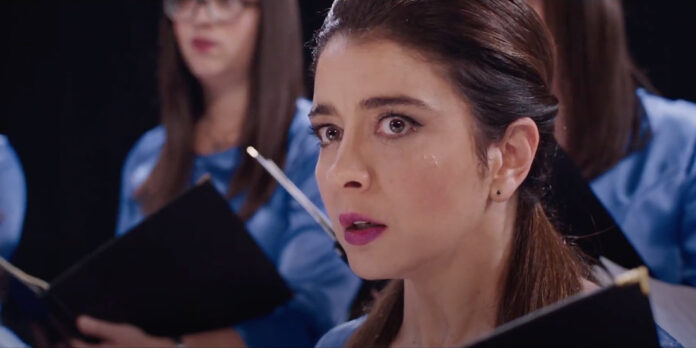 THE STORY – Voice actress and singer Inés starts to suffer from intense nightmares following a traumatic event. She’s not helped by the creepy sounds that appear on her voiceover recordings. One of her colleagues believes she could be carrying an ‘intruder’. Things only get stranger with the arrival of Inés’ overbearing mother (Cecilia Roth) and an encounter with a dangerously seductive pipe organ tuner (Nahuel Pérez Biscayart, 120 BPM).
​
THE CAST – Érica Rivas, Nahuel Perez Biscayart & Daniel Hendler

10/15/2020
​By James Palmer
​
Based on the novel by C.E. Feiling, “The Intruder” focuses on the Ines (Erica Rivas), a voice actress and singer who is slowly losing control of her reality. The Intruder, these imaginations of her mind, become more precedent in her day-to-day, so much so that it begins to become unclear on what may be a dream and what may be real. Although this idea has been done plenty of times before (“Black Swan” comes to mind), writer and director Natalia Meta is still able to create a film with an unnerving edge and atmosphere to it.

​We first meet Ines when she is in the sound booth recording dialogue and foley. Her booth is filled with bright candid colors that replicate onto her as she screams, stabs and speaks into the microphone. The film she’s watching is one of sexual fantasy and violence, with strangers watching masked individuals. It feels far from her reality when she returns home to her husband but any sense of clarity is quickly lost when they leave their safe haven.

​Hearing random noises in this booth, the noises continue to grow until they become visions. She has dreams of violence happening to her or her husband, as well as seeing mysterious figures. Rivas does a great job in encapsulating this loss of psyche over time. Her eyes become more desperate, her hair crazed in desperation and her mind more agile. But the people around her are fuelling the fire that these intruders are real – she’s told by another actress that the noises disrupting her recordings are an intruder and her downstairs neighbor tells her to lock her doors after hearing stomping at four in the morning.

But her coping mechanism is dealt with by drugs. She’s prescribed by doctors, psychiatrists and even her mother when she comes to visit. Cecilia Roth does a great job as Marta, Ines’ estranged mother who is as strange as the images that Ines is seeing. Ines’ relationship with her mother also perfectly demonstrates the descent into madness that she is having. Originally defiant and able to look after herself, this independence is soon filled with anger that is then consumed by desperation before Marta shares her bed and looks after her when she has a “nightmare.”

​Along with the imagery we may see, sound is the greatest factor here in delivering the surreal atmosphere that “The Intruder” has. Meta does a great job in utilizing Ines’ world by driving the sanity of the film through a choir-filled score – one that Ines’ is a part of. The mixture of an organ, as well as vocals, makes it more unclear as to what Ines is hearing and what is simply non-diegetic sound. But accompanying this music to shots of a piano being played by itself can support the conclusion that everything we see and hear is directly from Ines’ worldview.

​An identity crisis is clearly the message for Ines’ blend of the real and imaginary, as she meets strangers and fulfills her own sexual fantasies. There is a possessive quality to Rivas’ performance that sells this idea even further and although we’re unsure of whether this is for the good or not, the person inside of Ines’ is more confident and pervasive than before. In the final shot that runs through the credits, her group of vocalists sings on stage, dressed in blue. Ines sings directly to the camera as she moves through these people, entwining herself with them. Her unsettling manner is hard to look away from, especially since she chooses to never look away from us. Whether or not these intruders were real, or even if what Ines is doing is in the world of reality, “The Intruder” persists in a discomforting atmosphere that can keep you engrossed, despite it being a spiral we’ve seen time and time again.