“The Inspection” Will Be The Closing Night Film For NYFF60 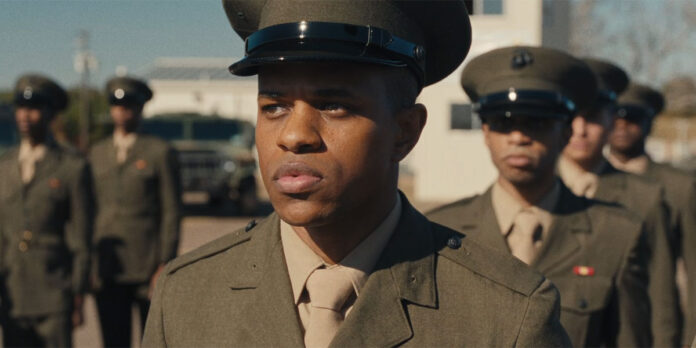 The New York Film Festival has announced its closing night film for the 60th annual film festival. Elegance Bratton’s “The Inspection” (which is having its world premiere at TIFF) will make its U.S. premiere on October 14th at Alice Tully Hall.
​
Click below for more information.

Known for his affecting and dynamic documentary “Pier Kids,” about homeless queer and transgender youth in New York, and the “Viceland” series “My House,” on underground competitive ballroom dancing, filmmaker and photographer Elegance Bratton has made his ambitious narrative debut with “The Inspection,” a knockout drama based on his own experiences as a gay man in Marine Corps basic training following a decade of living on the streets. In a breathtaking first cinematic starring role, Tony– and Emmy–nominated actor Jeremy Pope is run through an emotional and physical gauntlet as a young man dealing with the intimidation of a sadistic sergeant (Bokeem Woodbine), his desire for a sympathetic superior (Raúl Castillo), and his complicated feelings toward the mother who rejected him (a revelatory Gabrielle Union). Bratton’s film is a nuanced portrait of American masculinity and evocation of the military during the Don’t Ask, Don’t Tell era, as well as a forceful, electric work of autobiography. This is an A24 release.

“I’m incredibly humbled that my debut feature film will close the New York Film Festival this year,” said Bratton. “So many of my favorite filmmakers have made an impact as a part of this illustrious program. I’m overwhelmed to be a part of it. And as a New Yorker, this is a dream come true.”

“Festival galas are often occasions to celebrate filmmakers we know and love, but for this year’s closing night, we wanted to introduce audiences to someone we think will be shaping the art form for years to come,” said Dennis Lim, artistic director, New York Film Festival. “With ‘The Inspection,’ Elegance Bratton has made an autobiographical movie of rare power and confidence, a debut film for the ages.”

As part of its 60th anniversary celebration, the New York Film Festival will offer festival screenings in all five boroughs of New York City in partnership with Alamo Drafthouse Cinema (Staten Island), BAM (Brooklyn Academy of Music) (Brooklyn), the Bronx Museum of the Arts (Bronx), Maysles Documentary Center (Harlem), and the Museum of the Moving Image (Queens). Each venue will present a selection of films throughout the festival; a complete list of films and showtimes will be announced later this month.

A complete list of films and showtimes will be announced later this month. NYFF60 tickets, including those for partner venue screenings, will go on sale to the General Public on September 19th at noon. The festival runs from September 30th – October 16th.

Very interesting. No world premiere for “She Said” as the Closing Night film. No world premieres in the three central slots in general this year (“Till” is the only confirmed world premiere for NYFF60 so far). What this has done though, is it has made “The Inspection” a must-see for me at TIFF prior to its screening at NYFF. The full lineup for NYFF60 will be announced in the coming days. What do you think of what’s been announced so far? Please us know your thoughts in the comments section below or on our Twitter account.