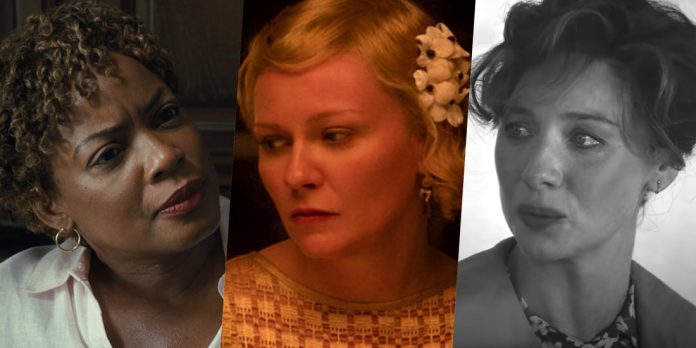 Best Supporting Actress may not be the most talked-about acting race so far this year. However, it could wind up being the most consequential, seeing as more than half the field could be filled with nominees from Best Picture frontrunners. Between both Caitriona Balfe and Judi Dench from “Belfast,” Aunjanue Ellis from “King Richard,” and Kirsten Dunst from “The Power of the Dog,” this is a race that might be a significant Best Picture bellwether – which would be a rare thing for this category.

Thanks to “Moonlight” and “Green Book,” it has become a reliable strategy for a film to win Best Picture, Best Supporting Actor, and a Screenplay award. But this time around, “Belfast” is favored to pull off a Best Picture/Best Supporting Actress/Best Original Screenplay combination. The last time that looked like a winning strategy, “Boyhood” looked set to pull it off in 2014. But while Patricia Arquette delivered her end of the bargain with an overwhelming Supporting Actress sweep, “Birdman” still overtook “Boyhood” in both Screenplay and Picture. Since then, Best Supporting Actress has been an afterthought when it comes to Best Picture. Alicia Vikander won for “The Danish Girl” after it didn’t get nominated in 2015, followed by Viola Davis being the sole winner for Best Picture nominee “Fences” in 2016. Alison Janney won for the snubbed “I, Tonya” in 2017, Regina King won for the snubbed “If Beale Street Could Talk” in 2018, with Laura Dern being the sole winner for “Marriage Story” in 2019 and Yuh-jung Youn being the sole winner for “Minari” in 2020. While eventual Best Picture winners “Spotlight” “Moonlight” and “The Shape of Water” did at least yield Supporting Actress nominees in Rachel McAdams, Naomie Harris, and Octavia Spencer, the last three winners in “Green Book” “Parasite” and “Nomadland” didn’t need them at all.

If none of the “Belfast” actresses win in Supporting, it could be the exact opening its closest rivals need. “The Power of the Dog” is already favored to get at least one Oscar for Jane Campion, most likely in Adapted Screenplay if not Director. If that happens and Dunst closes the gap in Supporting Actress, then “The Power of the Dog” would be in line to pull off the Picture/Supporting Actress/Screenplay combo instead of “Belfast.” But since this is the least crowd-pleasing movie among the three presumed favorites, the most passion voters might have for it is to honor Campion while leaving Dunst, Benedict Cumberbatch, and the film as a whole short elsewhere.

As for “King Richard,” most are already convinced Will Smith has Best Actor in the bag, so that might be the most it could do in terms of winning major categories. It would potentially leave Ellis at a loss since if any movie has a chance to win two acting Oscars, it is probably “Belfast.” Yet if “King Richard” starts making further headways to catch “Belfast,” perhaps Ellis can get an extra leg up in catching Balfe as well. Although even with two acting wins, it still might not win it all without rallying in Original Screenplay too, which could be a taller order against “Belfast,” “Licorice Pizza,” “Being the Ricardos,” and more.

Things look much easier for “Belfast” as long as it remains the favorite, but to stay that way, it would have to win at least one supporting category. Since Best Supporting Actor appears to be starving for favorites, perhaps all “Belfast” needs to do is push Dornan and Hinds and trust one of them will get ahead. It can follow the time-honored Picture/Supporting Actor/Screenplay combination without needing Supporting Actress. Then again, if that leaves an opening for Dunst or Ellis to win there instead, it could pose a big problem if their movies get boosted along with them.

To block any hope for “The Power of the Dog” or “King Richard” to stage a rally, it might be better for “Belfast” to focus on blocking them in Supporting Actress. It would seem to have all the advantages, as Balfe has been the projected leader ever since its first festival screenings, and Dench was expected to be the movie’s big acting play well before that. Unless they both cancel each out, then either one of them wouldn’t need much to pull away and stay there.

As of now, the three Best Picture leaders seem to have a stranglehold on this category, as they could snatch up three or even four of the five slots. This wouldn’t seem to leave much room for anyone else, as candidates from other possible Best Picture nominees or likely Best Picture snubs may be fighting for just one or two final spots, not the win. But since Best Supporting Actress hasn’t needed winners to come from Best Picture nominees these days, it can’t be ruled out that it might turn out this way again. Though, of course, it’s been a while since several Best Picture leaders called dibs on the category like this. Nevertheless, there are people outside of “Belfast,” “The Power of the Dog,” and “King Richard” who are already fighting to round out the field, if not do more should they get there. They include past winner Marlee Matlin in “CODA,” past nominee Ruth Negga in “Passing,” Ann Dowd in “Mass,” Nina Arianda in “Being the Ricardos,” Gaby Hoffmann in “C’mon C’mon,” Jesse Buckley in “The Lost Daughter” and perhaps Rebecca Ferguson in “Dune,” while the likes of Ariana DeBose in “West Side Story,” Cate Blanchett in “Nightmare Alley” and Meryl Streep in “Don’t Look Up” are still waiting to make their case. None of them are being talked about as possible winners, yet since no one really saw Youn as a likely winner at this time last year, it might be premature to say all these present, and future challengers are already out of the running.

It is still tempting to say Supporting Actress already looks settled, both in its leaders and likely nominees. Considering how one could say that about half the other major categories as well, it doesn’t bode well for a suspenseful season in general. If “Belfast” continues to look untouchable, it certainly won’t bode well for Balfe and Dench’s competition either. But if one or both of them slip up at some point, then maybe other races and prospects can shift as well. Either way, Best Supporting Actress will play some kind of an important role this Oscar season, possibly for the first time in several years. Since last year was the first time in 16 years where the Best Actress winner came from the Best Picture, maybe it’s a sign that the mere eight-year drought for a Best Picture-Best Supporting Actress winning pairing is next to fall. And yet since both “The Power of the Dog” and “King Richard” are favored in other major categories, maybe they could afford to let Best Supporting Actress go “Belfast”  ‘s way, then hope it slips up by losing its more vulnerable leads for Director and Original Screenplay instead.

Maybe Best Supporting Actress won’t look so crucial if “Belfast” can’t add a Screenplay or Director win too. Maybe in that respect, those categories will decide Best Picture one way or another, like they usually do. Then perhaps if “Belfast” is toppled there, a win for Balfe or Dench would become a mere consolation prize – much like Supporting Actress was ultimately just a consolation for “Boyhood,” “Fences,” “Marriage Story,” “Minari,” “Les Miserables,” “The Help,” “Precious” and “The Fighter” after they all lost Best Picture in this era. Should that happen, this year’s Best Supporting Actress race will go down like so many others. But right now, Balfe, Dench, and “Belfast” still have a good shot at making a greater impact than that this time around.

​Who do you think is going to be nominated for Best Supporting Actress? Do you feel it will play a crucial role in the Best Picture race this year? Check out the NBP team’s latest Oscar predictions here. Let us know your thoughts in the comments section below or on our Twitter account.