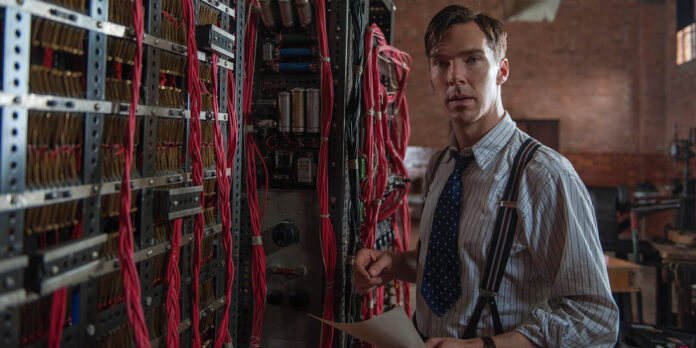 THE STORY – In 1939, newly created British intelligence agency MI6 recruits Cambridge mathematics alumnus Alan Turing (Benedict Cumberbatch) to crack Nazi codes, including Enigma — which cryptanalysts had thought unbreakable. Turing’s team, including Joan Clarke (Keira Knightley), analyze Enigma messages while he builds a machine to decipher them. Turing and team finally succeed and become heroes, but in 1952, the quiet genius encounters disgrace when authorities reveal he is gay and send him to prison.

“The Imitation Game” opens with a title card claiming that the film is “based on a true story.” This period biopic directed by Morten Tyldum (“Passengers“) is based on Alan Turing’s life, but only loosely. Turing was an English code-breaker during World War II, in addition to being an early computer scientist, who is known for his work cracking the Enigma code which was decisive to the Allied victory over Germany during the war. Unfortunately, the film suffers from a weak script that fails to properly educate the audience about Turing and the machine he built to break the code and it also downplays Turing’s homosexuality. While it’s a beautiful and well-made film with a great cast, it fails to live up to the man whose life it supposedly depicts.

“The Imitation Game” certainly does have merits, including a gorgeous score by Alexandre Desplat and very serviceable period costume design. The scope of the film is impressive, particularly considering its budget of $14 million, as it shoots between multiple locations and three timelines. One of the coolest things about “The Imitation Game” is that they filmed scenes at Bletchley Park, the actual country estate that was the center of code-breaking during the war, and where much of the film takes place.

The main reason that the film works as well as it does is the slew of good performances from an impressive British cast. Benedict Cumberbatch lends his usual ‘intelligent asshole’ performance to the role of Turing, but also has several genuinely moving moments and is remarkably funny. If it’s a bit of a clichéd genius performance, that’s more the script’s fault than his own. Keira Knightley portrays Turing’s friend, collaborator, and (for a time) fiancée Joan Clarke. She somehow makes the role work well, despite the sometimes painful lines she is given and plays off of Cumberbatch fantastically. How likable she is in the role makes it easier for the audience to warm up to Cumberbatch’s Turing as she does. Matthew Goode is easily the standout of the supporting cast as one of Turing’s collaborators, Hugh Alexander, with his natural charm providing as a great foil to Cumberbatch. The cast is rounded out by Rory Kinnear, Allen Leech, Charles Dance, and Mark Strong who all deliver effective performances.

Writer Graham Moore seems to almost enjoy flaunting his historical inaccuracy with his Oscar-winning screenplay. The film is divided between three timelines: Turing at school in 1928, Turing code-breaking during the war, and Turing being under investigation by the police in 1951. The fact that he was actually investigated (and eventually charged with “gross indecency” and given the choice of prison or medical treatment to “cure” his homosexuality) in 1952 seems representative of the way that Moore throws the truth to the wind. He takes liberties not just with the group’s breaking of the Enigma code, but also with Turing’s character. He is portrayed as painfully anti-social and grumpy, whereas in reality Turing was said to get along well with his coworkers. And despite it being a film about the machine that Turing built to crack the code, the audience is shown so little of how the machine works that you have to question if Moore himself understood it.

Perhaps the greatest flaw in the script is the way that it avoids actually reckoning with what it meant to be a gay man during this period of British history. The people who discover the secret that Turing is hiding either react completely nonchalantly or villainously. For a film whose main theme is secrecy, it doesn’t give us any sense of what his experience of hiding his sexuality would actually have been. It also invents a storyline in which he is blackmailed with the threat of exposing his sexuality, making him seem like a security risk when there is no evidence that this ever happened.

As someone with a background in history, I try not to be too much of a stickler about historical accuracy in films. But when you have a historical figure that the audience is likely to know little about, it seems irresponsible at best to change the facts of a story that is already thrilling on its own. The film also does a poor job of addressing the fact that despite Turing’s remarkable service to his country, the United Kingdom repaid him by arresting him and forcing him into chemical treatments that caused a physical decline so sharp that he took his own life. Instead, it opts to tell you this over title credits at the end with Desplat’s uplifting score playing over it. The contrast in emotions is perplexing, to say the least. While “The Imitation Game” is well-made in every respect except its script and boasts some remarkable performances, it’s nowhere near the movie that Turing and his story deserved.