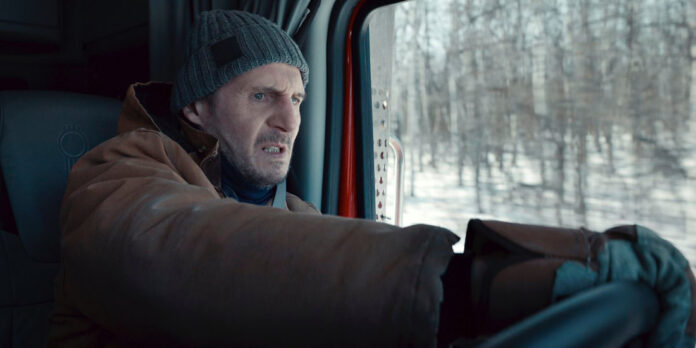 THE STORY – After the collapse of a diamond mine in northern Canada, ice road truckers (Liam Neeson and Laurence Fishburne) race against the clock, before the ice thaws and the miners are trapped. Will they make it in time and intact?

​​The only experience I have with trucks is being scared of them as they change lanes on the highway. So the fact that the new film “The Ice Road” managed to get me to understand and be excited by the different aspects and technicalities that go into driving a big rig is a significant accomplishment. Unfortunately, this Liam Neeson-led thriller quickly devolves into a somewhat familiar tale about the evils of human greed, which is a disappointing detour from the simple man vs. nature and time story that’s first established.

Neeson plays Mike, a weathered, unsurprisingly gruff-voiced trucker who makes fast enemies of most of the people he works with. He travels alongside his mechanic brother Gurty (Marcus Thomas), a veteran living with aphasia that was brought on by his time overseas. The two of them have a dynamic not unlike Steinbeck’s George and Lennie, down to the fact that Gurty even has a furry little friend (perhaps this could’ve been called “Of Ice and Men”). After a diamond mine in northern Canada collapses, trapping 27 miners inside with only 30 hours of oxygen, Mike and Gurty find themselves recruited into an unlikely team of truckers. They are given the responsibility of ferrying an essential piece of rescue drilling equipment to the disaster site. The only way to get there in time is by driving over the dangerous and ever-thinning ice roads.

The film’s first act works like a well-oiled machine. The cast of characters is clearly set up, all with their own troubles, both professional and personal. And once they hit the titular ice road, the vast and various specifics that truckers must be aware of and pay attention to on their treacherous journey are laid out clearly for the audience. This attention to detail is by far the best part of the movie. We learn about weight displacement, how speed needs to be carefully calculated, and the importance of closely monitoring ice pressure. It’s exacting and precise screenwriting, and in the first ice road set-piece, the filmmaking takes a shockingly subtle approach. We merely sit in the cabins with the truckers and learn about what it takes to accomplish such a stressful but exciting task.

However, the film then feels the need to inject a hefty helping of manufactured drama and conflict into the equation. The characters quickly become paranoid about each others’ motives and actions. Once these nearly-arbitrary moments of tension come into play, it actually makes the film less exciting rather than more. The story has an inherently interesting, taut premise just in telling the tale of these blue-collar workers facing the elements and a ticking clock. The “evils of man” story that takes the wheel in the film’s second half is a much less exciting road than the one the film starts down. Why take the highway when the scenic route was working just fine?

As the central character, Neeson is easily playing into his later-career action dad trope. He’s been beaten down by his years on the road, but his relationship with his younger brother is, as is necessary for the story to work, believable. It’s clear that he genuinely cares about him. Overall though, Neeson is a bit rigid, which makes sense given the character’s background for the most part, but a slight peek beneath the hardened surface would’ve made for a more empathetic character. Stage actor Benjamin Walker is having fun in his role as insurance representative Varnay. It’s the kind of part that allows an actor to serve as an outside perspective in this world of well-worn truckers, and he’s an enjoyable, if sometimes enjoyably ridiculous, presence.

“The Ice Road” really hooked me initially in ways that I found extremely surprising and captivating. But once it takes some perfunctory dramatic turns, some of that exciting energy wears off. Still, it maintains a decent cruising speed allowing it to rise above some of the more forgettable options that find their way onto streaming platforms.