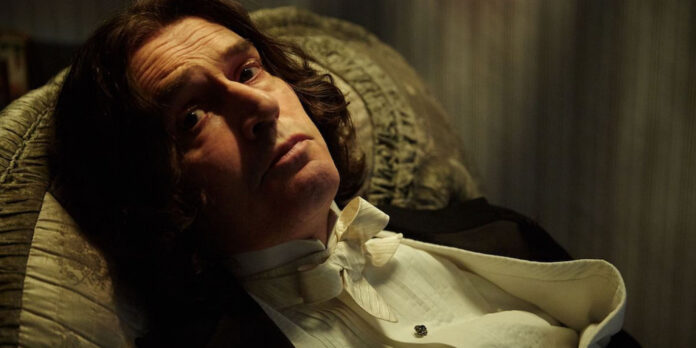 THE STORY – His body ailing, Oscar Wilde lives in exile, surviving on the flamboyant irony and brilliant wit that defined him.

​​Rupert Everett tries his very best to translate the sensation of descending into incoherent syphilitic madness into a movie.  Imagine if you took the aesthetics of a Tom Hooper movie, but executed them more sloppily and then meshed them with the coherence and narrative structure of “The Iron Lady” and you get “The Happy Prince.”

Rupert Everett charts the last days of the now-disgraced famed playwright Oscar Wilde as he stumbles about dodging the shame of his recent imprisonment for homosexuality while also trying to engage in life’s few remaining joys before he succumbs to illness. While Everett, who not only stars in, but also directs the film, deserves credit for trying something different and opting not to make a straightforward biopic, different does not always mean “good.”

Everett chooses to jump back and forth “The Iron Lady” style between great moments in Wilde’s past, almost like a Wikipedia article, but less thoroughly than Streep’s film did, and then return to a declining Wilde. The piece certainly boasts social relevance, as the indignity of Wilde being imprisoned for his sexuality despite his enormous talent hurts greatly. Scenes of him in prison do pack a certain visceral punch. And there is an undeniable melancholy punch to the proceedings. But the film seldom gives us enough narratively to really sink our teeth in to. And those aesthetics…

John Conroy lenses the film in muddy tones and employs jarring dutch tilts, fisheye lenses, excessive handheld work, and off-kilter framing. Perhaps the goal is in fact to share the experience of Wilde’s decline, but these aesthetic choices are ever-present and beyond distracting. They look cheap and render the film nearly unwatchable. And certain attempts at visual storytelling, such as showing Wilde turning out the lights with a lover and then immediately cutting to a shot of a train entering a tunnel feel amazingly tacky. These choices distract from Everett’s dedicated if slightly hammy, performance.

In short, “The Happy Prince” although well intentioned does feel more like a vanity project than anything else, and has the effect of burying Everett’s talents as an actor beneath his somewhat less assured talents as a director.