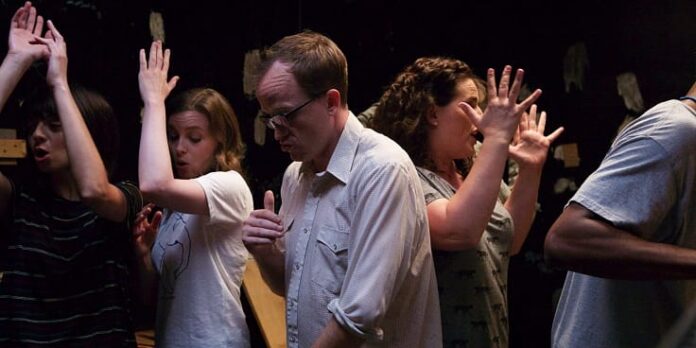 The saying goes that drama is hard, but comedy is harder. Well, there is something to be said for comedians throughout the country, hoping to make it big. Whether it means going viral, or having a successful standup career, or in the case of “Don’t Think Twice,” ending up on a comedy show in the vein of Saturday Night Live, the options are few and those who get there are even fewer. There is a considerable amount of luck that plays into whether or not a passionate and talented individual will live out their dream, no matter how passionate or talented they are. This process of opportunities and success is what propels Mike Birbiglia’s charming indie film “Don’t Think Twice.”

The Commune is an improv comedy group which performs nightly in New York headed by Miles (Mike Birbiglia). He, along with Jack (Keegan-Michael Key), Samantha (Gillian Jacobs), Allison (Kate Micucci), Lindsay (Tami Sagher) and Bill (Chris Gethard) are all contributing towards the group’s nightly performances. Each of them has their own personal dreams and struggles as the world of comedy does not necessarily manage to pay them well. They perform the art of improv because they love it. However, when an opportunity for the Saturday Night Live-like show “Weekend Tonight” opens up, each member of the group jumps at the idea of fame and getting the chance to earn a living, doing what they love to do, even if it may result in a few relationships being squashed along the way.

We have always known that Keegan-Michael Key is ferociously talented. The film knows this too as he is cast in the role of Jack that does not feel too far removed from Michael-Key’s own personality. Whether it be by design or not, Keegan-Michael Key shows quite a bit of range in the lead role as the man who gets called up to the big show and has to deal with the fallout from his peers/friends. However, he is not the show stealer of the film itself. In fact, it is his girlfriend Sam, played by the remarkable Gillian Jacobs, who has the most complex and fascinating role in the film as the better half of Jack that is affected the most by his newfound fame. While all of the other characters in the film certainly have their own unique moments to shine, its Jacobs who emerges as the star of this film and will most likely benefit the most. But let’s not forget the writer/director and a member of cast himself. Mike Birbiglia is also stellar in the film, as are the other members of The Commune, including Kate Micucci, Tami Sagher, and Chris Gethard. There is truly not a single weak link in the cast and a lot of that credit must go toward Birbiglia who must have encouraged his cast to do a lot of improvisational jokes and lines to make the scenes play out as authentically as they do.

When the laughs hit, they hit hard. When the emotion comes, it hits even harder, especially because I for one, did not know it was coming. “Don’t Think Twice” managed to move me despite its small scale story and unsatisfying ending. I have heard people say that they do not mind how “Don’t Think Twice” ends, proclaiming that it is true to life and goes against the grain of a typical “Hollywood ending.” Regardless of which, I still found it unsatisfying considering the scene which preceded it managed to hit me on an emotional level I was not prepared for. Maybe it’s because of my own theater background that I found the experience of Jack, Samantha and the rest of their friends so relatable, but whatever the case may be, “Don’t Think Twice” is one of the most underrated films of the year.