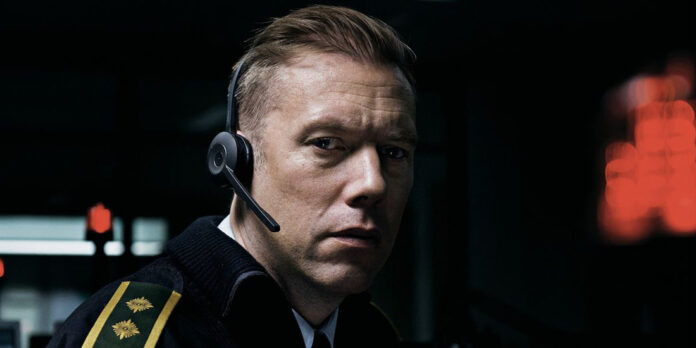 THE STORY – Alarm dispatcher and former police officer Asger Holm answers an emergency call from a kidnapped woman. When the call is suddenly disconnected, the search for the woman and her kidnapper begins.

If riveting, single location thrillers such as “Phonebooth,” “Locke” or “Buried” are your jam, then the Danish entry into the Best Foreign Language Film race this year titled “The Guilty” will be exactly what you’re craving for. Taking place over a single night at an emergency services police station, Asger Holm (Jakob Cedergren), a police officer who has been temporarily pulled from the streets due to a recent incident, fatefully answers the phone on the eve before his court hearing that will either get him his job back or lock him up in the jail. The phone call is from a distressed woman (the voice of Jessica Dinnage) who has been kidnapped. When the call gets disconnected, Asger becomes emotionally invested in the search for the woman and the man who kidnapped her.

Directed and written by Gustav Möller (and co-written with Emil Nygaard Albertsen), “The Guilty” does more than produce a single location thriller. It also attempts to show the faults in police officers and how their flaws are not from a place of hate but those faults are found in every human being on the planet. Whenever we need police officers to come to our aid, we expect them to be perfect, we expect them to perform their job to the highest order but we seem to forget that they are not superheroes. They are flawed human beings, susceptible to the same ills that befall all of us. Yes, they should be held to a higher standard, especially considering there are lives which depend on them performing their jobs well. However, Möller’s film does an admirable job of taking our protagonist and showing him as a determined officer of the law who wants to do the right thing but the very nature of the job “protect and serve” is never that easy. Rules sometimes need to be broken and in the case of Asger, his hot-tempered behavior and emotional investment gets the better of him one too many times. He’s an admirable character who is trying to do the right thing but Möller does not let him off the hook, portraying him as an unlikable character that is not evil. He’s simply flawed.

Möller stages the story in a brief runtime of 85 minutes with a point of view from inside the call center that never once breaks away from Asger’s perspective. The sound work used to convey the other character’s voices over the phone is believable, clear and immerses you into the tension created through the screenplay’s twists and Jakob Cedergren’s unsung performance. The use of close-ups and shallow depth of field in the shooting style also helps to create this immersion that by the time the film ends, we too, like Asger, finally feel like we can breathe again.

“The Guilty” attempts to show human beings for what they truly are: flawed, imperfect and ultimately guilty. What we’re guilty of changes from person to person but Möller daringly puts this perspective on the people we expect the most from in our greatest time of need: police officers. The result is a complex look at not just what a police officer’s role is but also what our expectations of them are. To frame such a complex topic around a tight, gripping and suspenseful thriller is all the more why “The Guilty” receives a solid recommendation.