“CAN YOU EVER FORGIVE ME?” 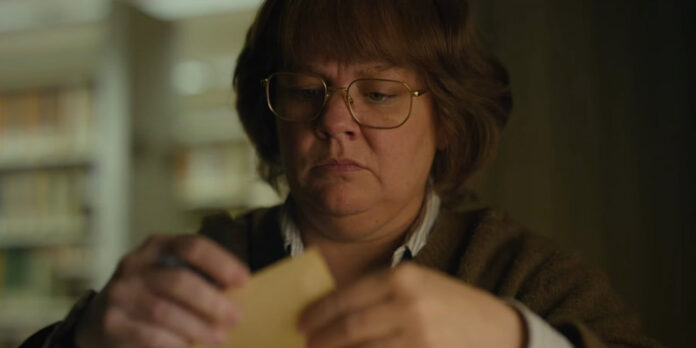 THE STORY – Celebrity biographer Lee Israel makes her living profiling the likes of Katharine Hepburn, Tallulah Bankhead, Estee Lauder and journalist Dorothy Kilgallen. When Lee is no longer able to get published because she has fallen out of step with current tastes, she turns her art form to deception, abetted by her loyal friend Jack.

​​​”Can You Ever Forgive Me?” follows the fascinating true story of writer Lee Israel, who was a working writer that fell upon a patch of bad luck and decided to utilize her writing talents to forge letters written by literary celebrities and sell them for profit. It was illegal but as she says in the movie, in many ways it was the best time of her life. Her work was appreciated and for the first time in a long time, such a lonely character felt loved and appreciated. With impeccable pacing, fluid writing and a winning on-screen duo in the form of Melissa McCarthy and Richard E. Grant, “Can You Ever Forgive Me?” stands as one of 2018’s very best films.

Lee Israel (Melissa McCarthy) is a 51-year-old gay writer with a heavy drinking problem, who lives alone in her New York City apartment in 1991 with no one but her cat. In fact, she despises most people and in turn, most people despise her. She’s divorced with very few (if any) friends. Her agent never returns her calls. And her books, which are literary biographies of famous people such as Katharine Hepburn, Estee Lauder and Dorothy Kilgallen, are not selling well due to their lack of a connection with the general public. And that’s exactly who Lee is, an out of touch and self-absorbed writer who has recently been fired from her job at the New Yorker, is short on cash and stuck with an anti-social attitude problem. In order to make her rent and take care of her cat, Lee turns towards a life of literary forgery with Jack (Richard E. Grant), an old friend who is also gay, lonely and like Lee, is trying to figure out his purpose at this stage in his life.

“Can You Ever Forgive Me?” is one of the more lively films of the year despite its low-key crime story. That life is given to the film by the balanced and insightful screenplay by Nicole Holofcener and Jeff Whitty which dives deep into its characters and draws them as sympathetic despite every spoken word or action which does its best to break that sympathy. Melissa McCarthy and Richard E. Grant are such a joy in this film as a duo on screen. Their chemistry in both their dramatic and comedic moments is incredibly spot on with not a single false note to be found. These are very rich characters brought to life by these two astonishing actors whoa re both delivering career-best work. McCarthy, in particular, walks a fine line between being off-putting but deeply sympathetic. Known for her comedic work, McCarthy shows us layers and humanity in her characterization of Lee Israel that many of her critics probably doubted that she had in her. By the time her big monologue at the end of the film rolls around, it should not only be enough for her dissenters to once and for all recognize just what a talented actress she really is but it also cements her status as one of the leading contenders for the Best Actress Oscar this year. So in short, yes, we certainly can now forgive Melissa McCarthy for “The Happytime Murders.”

And let’s also not forget the enjoyably charismatic, energetic and electric Richard E. Grant, who delivers a performance filled with such enormous panache that it is hard not to fall in love with his coke snorting, suave and lively character. What makes his performance all the more heartbreaking and masterful is that despite his character’s energy on the outside, like Lee, he is slowly decaying on the inside, filled with regret for his past and doubt for the future. When the two are on screen together, this broken pair of recluses makes for one of the most entertaining and delightful pairings of 2018.

Director Marielle Heller translates the screenplay very well, giving the film a terrific pace that never slogs or has any scenes, lines of dialogue or character beats which feel out of pace. There is a sure-handed and deliberate style to her work that lends itself well to “Can You Ever Forgive Me?,” which strikes the right tone for such complexly written characters. She even manages to bring even more life to the film despite its melancholy characters and mood with a propulsive jazzy musical score by Nate Heller and various other musical artists. “You can be an asshole when you’re famous but you’re not,” says one character to Lee Israel. Well, Lee found a way to make herself relatively famous with what she did and this wonderful film will only help to make that argument more valid. “Can You Ever ForgiveMe?” is not only a charming character piece about an un-charming character but it also calls into question our ties with history and purpose in life.