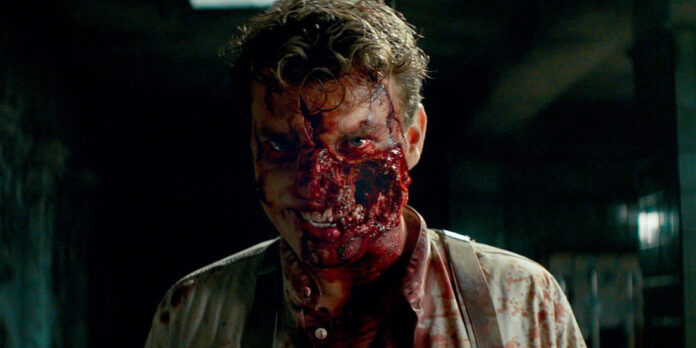 THE STORY – On the eve of D-Day, American paratroopers drop behind enemy lines to penetrate the walls of a fortified church and destroy a radio transmitter. As the soldiers approach their target, they soon begin to realize that there’s more going on in the Nazi-occupied village than a simple military operation. Making their way to an underground lab, the outnumbered men stumble upon a sinister experiment that forces them into a vicious battle against an army of the undead.
​
THE CAST – Jovan Adepo, Wyatt Russell, Mathilde Ollivier, John Magaro, Gianny Taufer, Pilou Asbæk & Bokeem Woodbine

​​The J.J. Abrams-produced “Overlord” is a zombie World War II film (Borrowing its title from another World War II film from 1975 which bears no resemblance to this movie at all) that forgets the zombie element for most of its running time. While the film does attempt to sprinkle in some truly dramatic elements of the World War II era, it falls a bit short. It’s nothing we haven’t seen before and is just recycled from other films of the same nature. The hook of the film never fully comes together leaving you wanting more from both the way the film was marketed and the way that the script and characters treat the concept as well. Aside from that the film is remarkably made. There is some stunning cinematography, great performances from the ensemble, impeccable production design, a haunting score, loud sound, and gruesome makeup. “Overlord” is something that will not disappoint those with no expectations or no preconceived notions of the project but it may let down those looking for a “zombie story” in a period piece.

While being dropped into the heart of Nazi-occupied Germany in World War 2, Private Boyce (Jovan Adepo) and his squad of fellow American soldiers are tasked with the mission of destroying a radio tower behind enemy lines. The soldiers take refuge in a small town right outside of the radio towers location. After further investigating the tower, Private Boyce discovers that the Nazi’s are conducting some rather insidious experiments. Experiments where they have successfully achieved bringing the dead back to life. However, not only do the dead come back they come back stronger, faster, and better than ever.

The film has a really interesting premise. It focuses on the mentality the American soldiers had while behind enemy lines during World War 2 and offers up some decent drama in this area. The only thing that causes this to falter is that it’s not presenting anything new. Anytime the film focuses on the war genre part of the film (which is for the first two thirds) you can’t help but realize that this is all something we have seen in some other war film before. So once the film introduces the true plot about the Nazi experiments, the result is a nice uptick in both story, tone and excitement.

“Overlord” takes an absurd amount of time trying to find its footing with the war drama story that it forgets it is also trying to deliver a horror experience as well. The tone of the film is all over the place and part of that is a failure on the marketing. Is this supposed to be a serious war film? Or a campy, gory zombie film set in World War II? The filmmakers try to build towards the overblown third act but by the time everything comes full circle, the film has run out of steam and is merely trying our patience by that point.

Although the film may not deliver exactly what we were expecting, and the war drama content is rather cliche and typical, there is still drama to be found. The tension created from the American soldiers being behind enemy lines still feels real and the emotion from the cast does bleed through onto the screen. Each actor within the ensemble does an excellent job at playing their part and they do it with dedication and passion. Jovan Adepo’s (“Fences” and HBO’s “The Leftovers”) star power continues to rise, making him one of the most exciting young actors working today. Wyatt Russell embraces his father’s famous action-hero tough guy machoism unlike ever before and Pilou Asbæk chews up the scenery as a deranged Nazi commander.

I will say that I do think the film is exquisitely made. Just about all technical aspects of the film are stunning and pleasing to look at or listen to. While it does not reinvent the wheel, the attention to detail in the production design is remarkable. In the Nazi lab, to a small German town, and even the remote army base, they are all designed with grace and subtlety. This is put on display the most when an exhilarating oner shot in the third act highlights the production design in all of its glory. Another highlight is the score by Jed Kurzel. The music flows so naturally from scene to scene and is the cause of constant goosebumps. From the thunderous drums to the soaring strings, the film provides a good amount of focus towards its score, making it an excellent mood setter.

“Overlord” is a film that I would describe as frustratingly adequate. It is incredibly well made, as you would expect from a big budget studio film, but the story and tone never fully comes together. The hook of the story never comes to full fruition, though both the war drama which does take up a majority of the screen time and the all-out zombie mayhem of the third act are not bad on their own. With first-rate technical achievements and a likable cast, “Overlord” seems to be nothing more than a boardroom meeting pitch. It sounds great on paper but does not end up being anything greater than that boardroom pitch.