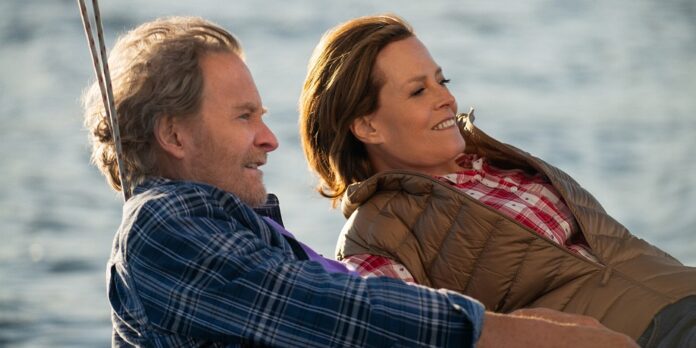 THE STORY – A New England realtor ignites long-buried emotions and family secrets when she rekindles a romance with her old high school flame.

Breaking the fourth wall is a technique that’s been used frequently in plenty of films and shows – “Persuasion,” “Fleabag,” and “Enola Holmes” come to mind in terms of recent works – but it works best when the series or movie knows exactly what kind of story it is. That’s not the case in Maya Forbes and Wallace Wolodarsky’s “The Good House,” adapted from Ann Leary’s novel, which focuses on a woman who is an alcoholic, in serious debt, a failing realtor, and falling for an old flame. If that sounds like a lot in one story, that’s because it is. Add speaking directly to the audience in the mix, and you get a movie that changes tones more times than the lead character opens a bottle of wine.

Hildy Good (Sigourney Weaver) is a small-town Massachusetts real estate agent who seems to have her life together when we first meet her, but the messy layers slowly start to reveal themselves. She’s lying to her two daughters about staying sober, has lost a bunch of clients to her former mentee turned rival Wendy (Kathryn Erbe), is single after her husband (David Rasche) left her for a man, and has a lot of childhood trauma buried deep inside. But if you ask her, she believes everything is fine, and Weaver seems to be having a lot of fun with this character who quips lines such as, “In my mind, wine isn’t really drinking. Vodka definitely is.”

But the longer we spend time with Hildy, the more destructive we see her become. As she starts buddying up with new resident Rebecca (Morena Baccarin), their hangouts turn into binge drinking sessions which Hildy knows her daughters would be extremely disappointed with. Hildy also makes reckless decisions, such as drinking and driving, and drinks so much that she can’t remember what happened the night before. Not to mention she can’t help but stick her nose into everyone’s business – even as she tells people she doesn’t get involved in others’ problems – and muddies things up even more. It seems like she’s on a one-way street to self-destruction with no brakes, even as she rekindles a romance with an old flame Frank (Kevin Kline), which brings some needed positivity into her life.

The main issue with this film is that it doesn’t know what kind of story it wants to be. It starts off fairly lighthearted and charming, especially when Hildy breaks the fourth wall to comment on the people in her life and gossip in town, and it even treats her drinking as a cute character trait. There’s even mention of her connection to the Salem witch trials that have led to some mind-reading powers that are never revisited again. It then moves into a more serious tone with a family intervention about Hildy’s drinking before reverting back into silly territory. She then revisits the childhood trauma that clearly impacts her to this day before we enter a comically messy third act that includes a missing child, hallucinations, and a total breakdown. Not only do the constant tonal changes throw off any flow this film has, but it makes it exhausting to keep up. In the end, audiences likely won’t feel any connection to Hildy and her never-ending drama, let alone remember any of the countless background characters who are severely underwritten. Weaver and Kline do their best with what they’re given, especially with their poorly written romance, but not even they can save this film.

Hildy is constantly trying to sell people on how she’s a great real estate agent, but “The Good House” will likely not get many buyers interested in its messy story. While it’s nice to see Weaver continue to play complex female characters on the big screen, it’s a shame that this film couldn’t bring much depth that Leary’s novel had. Perhaps this would have been stronger if it was a limited series, allowing it to fully explore Hildy’s troubled situation and shed light on important issues.

<b>THE GOOD - </b>Sigourney Weaver and Kevin Kline do a fine job bringing their characters to the big screen, and there are a few comedic moments sprinkled throughout.<br><br> <b>THE BAD - </b>It struggles to figure out what kind of movie it wants to be, especially with tonal changes that come every so often. Many characters, relationships, and plots are underdeveloped.<br><br> <b>THE OSCAR PROSPECTS - </b>None<br><br> <b>THE FINAL SCORE - </b>4/10<br><br>"THE GOOD HOUSE"