The First Look At “The Devil All The Time” Is Here 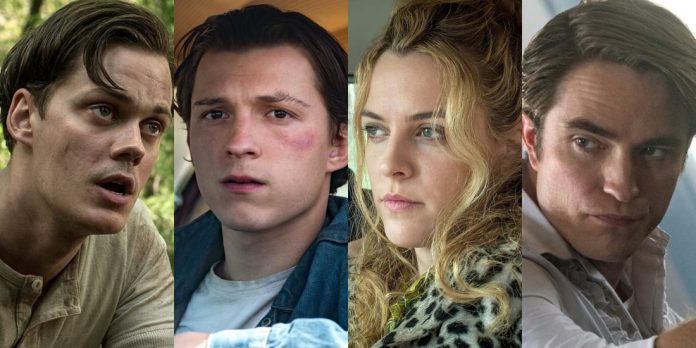 By Melody Lee
​
In July, Netflix announced that Antonio Campos’ (“Christine”) family drama “The Devil All the Time” is set to be released on September 16th, 2020. On Monday, Entertainment Weekly released the first images from the film, which can be seen in full here. The film’s ensemble cast stars Tom Holland, Robert Pattinson, Riley Keough, Eliza Scanlen, Bill Skarsgård, Sebastian Stan, and more.

Tom Holland, known for portraying Peter Parker in the Marvel Cinematic Universe, plays the film’s central character, Arvin Russell. In an interview with Entertainment Weekly, Holland spoke about the role and working with Campos: “I was really eager to work with Antonio because his previous films that I’ve seen are very raw. I guess it was the challenge of doing a different accent, playing the rural kid, a period film, a new director. Everything ticked the boxes for me.”

“The Devil All the Time” was adapted from the novel of the same name by Donald Ray Pollock. Campos and his brother Paulo wrote the screenplay, and Antonio spoke about the experience to EW. He said, “It was a hard book to adapt also because there was so much that we loved. I’m a big fan of southern gothic and noir and this was a perfect marriage of the two. Sometimes you might be adapting a piece and you think like, Well, there is a seed of a good idea here and I’ll just throw everything away and start from scratch. In this case it was like, we love everything!”