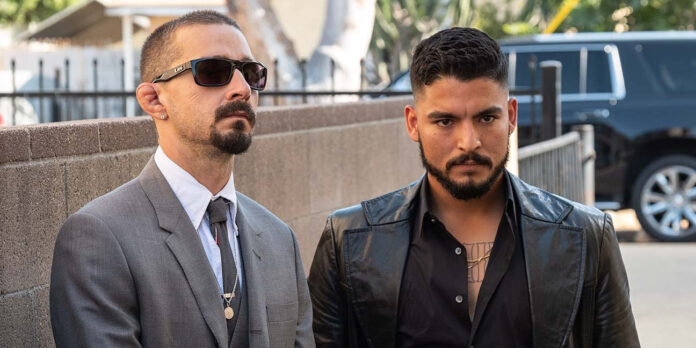 ​​​​​At the very beginning of writer/director David Ayer’s latest film “The Tax Collector,” we’re told that this is a story of love, honor, loyalty, and family. And while that kind of sentiment might’ve worked for Ayer’s fascination with macho-crime violence at a different time in his career, the effect has worn off as times and tastes have changed. Now, we can see a movie like “The Tax Collector” for what it is: a lifeless, horrific & bloody misogynistic bore.

David Cuevas (Bobby Soto) works as a “tax collector” with his buddy Creeper (Shia LaBeouf) in Los Angeles for a high ranking drug-lord known as the Wizard. Every gang has to pay taxes on every score that they land and the two of them collect 30%. If they don’t get their money, they make sure that you pay up next time or never again. These are violent and dangerous men, with very little room for compassion in their line of work. However, David is a compassionate man back at home to his loving wife and their two kids. When an old rival comes back (Jose “Conejo” Martin), David’s existence and everyone he holds dear is threatened, leading to a climactic confrontation filled with bullets and mayhem.

I don’t want to completely rip into David Ayer. I actually think “End Of Watch” and “Fury” are genuinely good movies and I was hoping he had turned a corner in his career during that period. Unfortunately, after the double critical failures of action-blockbusters “Suicide Squad” and “Bright,” Ayer has traveled back to where he feels most comfortable: The sunny crime-filled streets of Los Angeles. And like I said, while that setting kicked his career off with films like “Training Day” (which he wrote) “Harsh Times” and “Street Kings,” going back to it feels regressive and naive.

The movie’s biggest asset is Shia LaBeouf, who is coming off of the best year of his career after writing and starring in “Honey Boy.” Calling himself “the devil,” his intensity leaps off of the screen and injects the movie with much-needed energy, despite the fact that he’s woefully miscast in a role that can come off as problematic and racist for its brownface exploitation. Ayer tried to defend the casting decision with the statement that Shia’s character is a “whiteboy who grew up in the hood. This is a Jewish dude playing a white character. Also the only white dude in the movie.” To me, it reads as a desperate defense, rather than a calculated decision because never once does Creeper’s skin color get mentioned in the movie or have any bearing on the plot. In fact, despite the film’s marketing centering around Shia LaBeouf, he’s not even the lead at all.

Bobby Soto gets most of the film’s heavy lifting and he does an admirable job, all things considered. His blood-soaked quest for revenge in the film’s third act is motivated by extreme emotion and anger and Soto manages those violent qualities with the more touching and vulnerable side of David when he’s with his wife and children. Unfortunately, the dialogue he and Shia are given is spent mostly either discussing the violent acts they have committed (“Are we killing anyone today? I have nice shoes on.”) or objectifying women. Cinthya Carmona tries to be a beacon of light for women in this movie but she too is undermined by Ayer’s cruel script and comes off as nothing but a motivational plot device for her male co-star.

“The Tax Collector” is a lifeless crime film, lacking in any sense of style, originality, and emotional stakes until the third act, by which it is too late and we have lost basically all interest in what this could have been. But what could it have been? Did this story even need to get told in 2020? Why did Shia LaBeouf get a real-life chest tattoo if we’re not even going to see it in the movie? When you’re using editing flashes to illustrate plot points that might be unclear to your audience, you know that your script is lacking. So why go forward with it? It’s all the more hilarious that the movie ends on a fourth-wall-breaking shot which is intended to set up a sequel of some sort because who wanted this film in the first place?