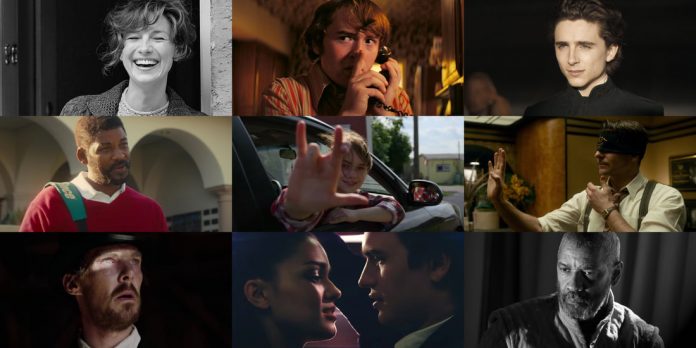 ​​Now that “West Side Story” and “Nightmare Alley” have premiered for critics, at last, the first stage of Oscar season 2021 is finally over. We’re also receiving top ten lists from the National Board of Review and AFI, and now that every contender and pretender has been seen by some form of audience, it makes it easier to whittle down the cut for the next stage, at least regarding what will be nominated for Best Picture. This is leaving aside whether “Belfast” and “King Richard” are still the frontrunners, whether “West Side Story” and “Licorice Pizza” have enough late buzz to challenge them, and whether “The Power Of The Dog” and “Dune” can still surge past them all. When it comes to getting into the Best Picture field of ten for starters, that race can now be divided into three tiers and about twenty or so movies with some form of hope left.

​Let’s break it down!

​LOCKS OR NEAR-LOCKS
It’s been clear since film festival season that “Belfast,” “King Richard,” and “The Power Of The Dog” had their places locked in the field a long time ago. Regardless of where they stand in the pecking order to win and whether any of them will win, they have staked their claim to be in the running for a while now. No matter if “Belfast” and “King Richard” really can’t stay the favorites for the long haul, and no matter what important top ten lists “The Power Of The Dog” misses (looking at you NBR!), they will be around in some shape or form next March.

It has taken about three months for any other movies to secure a place alongside them. Until the last few weeks, it looked like “Dune” was the other closest thing to a lock due to being the only $100 million-grossing film in the race and likely having a few below-the-line categories locked up nominations-wise and even wins. Maybe too much time has gone by for “Dune” to become a “Mad Max: Fury Road” like a threat to win Best Picture, yet if the industry wants to make a statement by honoring a grand theatrical spectacle, it should still be there for consideration. I say it makes it in.

Then again, depending on box office returns, “West Side Story” could take over that narrative and a few others. After its long-in-the-making premiere played to the rafters, early reviews topped the scores for “Belfast” and “King Richard,” and after a statement-making National Board Of Review Best Actress win for Rachel Zegler, it seems the Sharks and Jets really will dance on the Oscar stage for a second time – if not to win a second time.

The buzz for “West Side Story” being the tremendous late hope in the Oscar race came a week after Paul Thomas Anderson’s “Licorice Pizza” got the exact same hype. Depending on what word of mouth becomes once it opens wider on Christmas, and depending on the discourse over the age difference of its central romance, it may not maintain the hype of a potential Best Picture winner. Yet, a nomination and a possible Best Original Screenplay Oscar win for Paul Thomas Anderson are still very much in line.

​ON THE BUBBLE
With six virtual locks for Best Picture already, it’s fitting that there are probably six squarely on the bubble films as well. However, two are right on the border between a lock and a bubble.

“Don’t Look Up” and “Being The Ricardos” have countless advantages in their favor. Academy voters are usually far more forgiving towards Adam McKay and Aaron Sorkin than many on Film Twitter and film critics. So far, Academy and guild screenings have played very well for both, with voters being far more impressed with their latest efforts thus far. “Being The Ricardos” has already crashed Nicole Kidman into the center of the Best Actress race, while “Don’t Look Up” could ride the coattails of its megastar cast to a Best Picture nomination, and both could land Sorkin and McKay back in their usual spots as Best Original Screenplay nominees. With all of this in their favor, the full reviews and scores have been troubling, to say the least, and with the ever-present possibility of both Sorkin and McKay saying something tone-deaf in the months ahead, their status, in the long run, is still too early to call. It might well be a different story in just a few weeks when the guild and industry awards chime in, yet they shouldn’t rest on their laurels either way.

Even if “Don’t Look Up” and “Being The Ricardos” can be considered locks, that would still leave two spots left for grabs. Among the movies that might have the best shots at them, they each have strengths and pretty clear weaknesses. “CODA” is perhaps the most confounding case of all, as it swept Sundance and is doing well on the critic awards circuit so far. But after premiering on Apple+ this August with barely a blip, and after many other big emotional crowd-pleasers charged into the field, its fate could really go either way. It could overperform with nods in Best Picture, Adapted Screenplay, and in both supporting categories, or it could underwhelm as “The Big Sick” did in 2017 – and either outcome seems pretty plausible.

“C’mon C’mon” has become the little indie that could be in the race, as A24 might well work its awards season magic to get another critically acclaimed darling in, especially in a field of ten nominees. Yet after it premiered in theaters, attention was instead placed on the first screenings and raves for “Licorice Pizza,” “Don’t Look Up,” “Being The Ricardos,” and “West Side Story.” If “C’mon C’mon” is to get in, it needs a renewed boost of attention, assuming its window of opportunity hasn’t completely closed. If it has, then A24’s big award season player might be “The Tragedy of Macbeth,” which still has some of the best reviews of any film in contention for a Best Picture nomination. Yet, even with that and Academy darlings Denzel Washington, Frances McDormand, and Joel Coen involved, there’s still a sense that critics and Shakespeare buffs might only adore it. However, if voters check off Washington and McDormand like they usually do, the film itself may ride their goodwill in short order all the way to a Best Picture win. Landing spots on the National Board of Review and AFI Top 10 have undoubtedly helped right before it opens wide.

Finally, “Nightmare Alley” seems to be struggling a bit with initial reviews and reactions, despite being the first film from Guillermo del Toro since his Oscar-winning film, “The Shape Of Water.” But if Del Toro still has his fans in the Academy and if the bubble for the final spot is soft enough, it could still be a “rounding out the field” nominee, especially with the craft branches behind it. It earned its fair share of raves for Bradley Cooper, Cate Blanchett, and the production design, so it may not yield too much anger if it steals a spot from a more acclaimed bubble film – or from a backup option.

​THE LONGSHOTS
This last tier of films might be long shots for many reasons. However, if voters really can’t agree on enough bubble films to get to ten nominees, they have these other options to consider if they are truly desperate.

“House of Gucci” is probably going to be in the race in some capacity, no matter what critics say, if only because of Lady Gaga, Jared Leto, and the film’s solid box office. As such, until nomination morning or at least until the Golden Globes and SAG completely rule it out, it cannot be declared totally dead in this category quite yet. “Spencer” may already be on life support, especially if Kristen Stewart’s lead for Best Actress isn’t as wide as it looked a month ago. But if Stewart can hold on, then perhaps the rest of the movie can too and give her the final boost she needs after all. “Cyrano” has not been widely seen enough to have it in contention yet. However, those who have watched it are adoring its heartbreaking romance, the music and leading performance from Peter Dinklage. Keep an eye on this one in case it warms the hearts and causes voters to cry.

Netflix is a curious case since it usually gets two Best Picture nominations a year and already seems to have two contenders locked in with “The Power Of The Dog” and “Don’t Look Up.” But in a field of ten, if this is where Netflix finally lands three nominees in one year (and let’s face it, they were probably close with the sliding scale already with “The Two Popes” in 2019 and “Ma Rainey’s Black Bottom” in 2020), the question becomes whether that third film is the musical “Tick, Tick..Boom!” or the chillier Gotham Award-winning film, “The Lost Daughter.” Each of them could ride potential acting and screenplay nominations to Best Picture momentum, or each could prove too polarizing for voters, whether there’s room for them or not.

If those two are ruled out and the Academy still can’t get ten nominees, the last resort option is a foreign nominee. In what may be the most stacked year for international contenders in some time, after “Parasite” and “Roma” won big just a few years earlier, a foreign nominee in a ten-film field should be a no-brainer. And yet with limited campaigning for hugely acclaimed films like “The Worst Person in the World,” “Flee,” “A Hero,” “Drive My Car,” “Parallel Mothers” and “Titane,” among others, it could take a massive critical boost for any of them to ping on the Best Picture radar, which still might not be enough.

Nonetheless, on the off-chance winds and campaigns change, these films are there if the Academy needs extra help. Between the locks, the bubble films, and the longshots that survived the first stage of Oscar season, there are a lot of survivors left jockeying for position in this middle stage to come.

Made NBR only:
The Last Duel
Red Rocket

Have not made either list:
​Being The Ricardos
C’mon C’mon
Cyrano
House of Gucci
The Lost Daughter
​Spencer

What do you think will be nominated for Best Picture this year? Check out the NBP team’s latest Oscar predictions here. Let us know your thoughts in the comments section below or on our Twitter account.