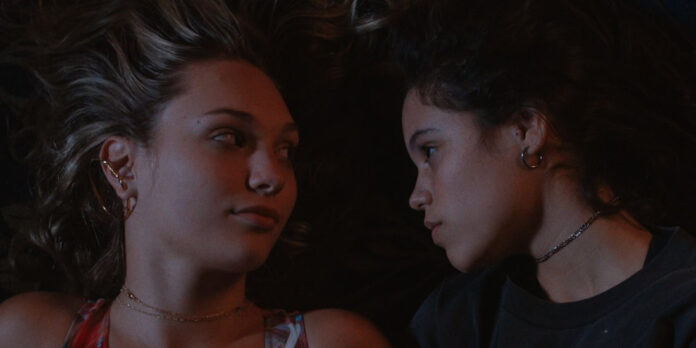 THE STORY – Bolstered by new friendships forged under sudden and tragic circumstances, high school student Vada begins to reinvent herself while reevaluating her relationships and her view of the world. Moving away from her comfortable family routine, she starts taking chances with a series of decisions that test her own boundaries and push her in new directions. As she spends more time with Mia, they grow closer and Vada slowly redefines herself through their shared experiences.
​
THE CAST – Jenna Ortega, Maddie Ziegler, Shailene Woodley, Julie Bowen, John Ortiz, Niles Fitch & Will Ropp

​Vada (Jenna Ortega) is a regular teenage girl living an ordinary day: She goes on a pre-school Starbucks run with her gay best friend. Her teacher compliments her on the questions she asks in class. Her younger sister sends her an emergency text and then calls to say she got her first period. When she meets class beauty and social media influencer Mia (Maddie Ziegler) in the bathroom, she immediately texts her friend to snark about Mia contouring for picture day. But then a shot rings out. And another. Vada and Mia hide in a stall together, terrified. The experience bonds them together: Before long, Vada is at Mia’s parent-less house every day as they help each other get through the most challenging time of their lives.

Megan Park’s “The Fallout” is an uncommonly empathetic portrait of a generation having to live through the unimaginable. Every character is extended the kind of grace you hope they’d receive in real life in this situation, given the space to deal with things as they see fit, even if they deal with it by not dealing with things at all. Vada herself may not be the most sympathetic character – when she’s not actively repressing her emotions, she’s lashing out at her loved ones and pushing them away – but her actions are understandable in context. While some of her classmates work through their feelings and use them to propel themselves forward into their new life, Vada can’t feel anything, at least in part because she doesn’t know how to deal with the overwhelming flood of conflicting emotions flowing through her.

Ortega is a revelation, believably hollowing herself out and even finding moments of pitch-perfect humor (a school-day ecstasy trip is a particular highlight). Her ability to phase through all the different emotions Vada is experiencing, sometimes connected to each other and sometimes not, is stunning. All of the evidence needed is here to secure her place as one of the best new actresses in recent memory. Ziegler acquits herself very well, proving that she actually can be a believable actress when given good material by a strong director. The awkward almost-unrealness of “Music” and “The Book of Henry” is gone, replaced by an awkwardness very much grounded in reality, as Mia slowly drops her guard to let someone into her sheltered, previously safe, orderly life. As Vada’s parents, Julie Bowen and John Ortiz, serve as different kinds of release valves, with her providing some much-needed laughs in the most unexpected places and him leading a deeply moving purge of emotions that kicks off the film’s last act. Park keeps the ensemble on the same page, ensuring that everyone has their own tangible personality but keeping the tone consistent throughout. Even with a cast this talented, it’s an impressive feat for a first-time writer-director to keep everything so tight, and she manages it with ease.

Park saves her best trick for last, though, ending on the film’s most powerful note. The past may be past, and we may be able to find ways to move on through grief. But some scars can’t ever heal because the world won’t let them. We have been living in an epidemic of school shootings for years now, and it shows fewer signs of abating than the COVID-19 pandemic does. As long as they keep happening, our young people will never be safe, no matter how hard we try to keep them that way, even into their adulthood. “The Fallout” is a searing indictment of our country, one that is all the more effective for how much it appears like a character study for the first 88 minutes. But once that final bomb is dropped, the film becomes something far deeper and more chilling. That Park can pull this off as the final flourish of her debut feature marks her as one of the most promising filmmakers of her generation, and “The Fallout” as her first masterpiece.