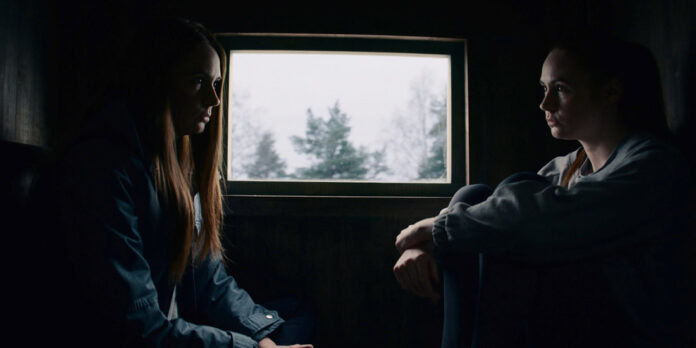 THE STORY – Recently diagnosed with a rare and incurable disease, Sarah is unsure how to process the news. To help ease her friends and family’s impending loss, she is encouraged to participate in a simple futuristic cloning procedure called “Replacement,” where Sarah’s final days will be spent teaching the clone how to live as Sarah once she’s gone. But while it only takes an hour for the clone to be made, things become significantly more challenging when that double is no longer wanted.

​​​”Dual” opens up on a “Hunger Games” typesetting. A man is standing behind a curtain on a football field and has to pick a weapon. We don’t know what, or who, is behind that curtain, but it doesn’t seem to be a friend by the looks of things. Once that curtain drops, it is a fight to the death. The first man gets hit by an arrow, but he manages to come out on top against someone who looks exactly like him. When asked which one he is, the man says he’s ‘the double,’ and he’ll now take on the identity of Robert Michaels. Clearly, some double trouble.

Riley Stearns’ film — which can be described as part Benjamin Cleary’s “Swan Song,” part Ridley Scott’s “The Last Duel,” with a hint of Yorgos Lanthimos-style deadpan delivery — centers on a near future where you can create a clone of yourself if you know you’re dying. It is meant to help your loved ones not skip a beat when you do pass, but in Sarah’s (Karen Gillan) case, it leads to a rivalry that, similar to the opening, will end in a bloody duel. Similar to Stearns’ previous “The Art of Self-Defense,” there’s plenty of deadpan humor, along with a strong performance from Gillan, but it is on the lazy side with developing characters and the world for which it’s based.

Sarah doesn’t live an extraordinary life. She doesn’t like talking with her mom on the phone, she doesn’t care to speak with her boyfriend Peter (Beulah Koale), and she has a bit of a drinking problem. When she learns that she has a rare and terminal health condition, it is quite honestly the best news anyone could have given her. So that her loved ones don’t suffer, Sarah decides to buy a replacement who, with just her saliva, looks and sounds just like her, though she’s slightly slimmer, has shinier hair, and somehow doesn’t know what her favorite foods, music or sex positions are.

For however long Sarah’s around, she’ll show Sarah’s Double, her replacement’s name for now, how to fit into her life. But Sarah’s Double doesn’t have much trouble with that because Peter and Sarah’s mom instantly gravitate toward this more beautiful version. It becomes an issue later on when Sarah learns that her condition has gone into complete remission, and the 28th Amendment states that two versions of the same person cannot both live simultaneously. Sarah suddenly finds motivation to live and begins to prepare for her duel with a straight-faced trainer (Aaron Paul).

When it comes to the deadpan humor, that’s where the film succeeds the most. In one scene, Sarah’s doctor nonchalantly tells her that she wants to be buried so that people will have a bigger obligation to visit her grave. The delivery is so dry but so funny at the same time. Once Sarah starts training for her duel, the no-jokes attitudes continue, including the silliest and most serious dance lesson you’ll ever see on screen. Gillan plays her character to a T when it comes to not caring about pretty much anything that is said or happens to her, while Paul adds an extra ounce of humor with his tough-as-nails character. I just wish there was something, anything, more to him than the two-dimensional character shown.

The story is also barely developed. There’s an exciting premise in this film, but not much explanation about how the technology exists, how a clone can be made in just minutes, and why two versions of the same person can’t exist. There is also no accurate indication of why Sarah has a newfound interest in wanting to live. It could just be jealousy from seeing everyone move on as if she’s not there, but as we see, she’s not really one to get emotional.

“Dual” doesn’t wholly achieve what it sets out to explore, but the third act does go in a new direction that leaves viewers with something different than what was initially presented. It makes us wonder what in life is worth fighting for. For Sarah and Sarah’s Double, it might be taking their rightful place in this world. For you and me, it might be love, happiness, success, or something else. What matters most, though, is that there’s something out there that keeps us fighting until the very end.