“ONCE UPON A TIME IN HOLLYWOOD” 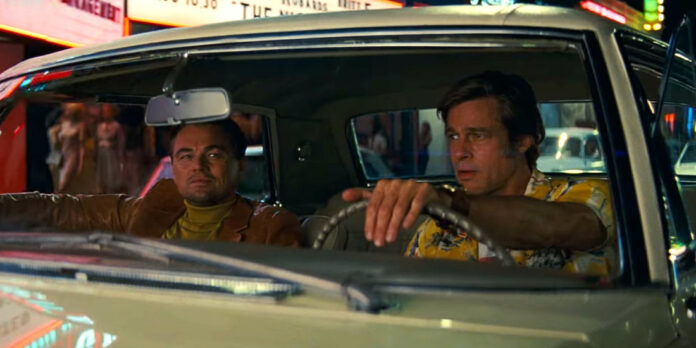 ​​​​​​​​Writer/Director Quentin Tarantino is back at the multiplexes to provoke, entertain, engage, enlighten us and of course to pay homage and re-write the history of cinema that has so clearly defined his work in his slightly imbalanced 9th feature film “Once Upon A Time In Hollywood.” While it may seem like Tarantino has never changed (he still has creative indulgences and unnecessary tangents that go on for far too long coupled along with many shots of women’s feet), his audience certainly has. Some will see this as a return to form for Tarantino, as he focuses on richly drawn characters that feel real and don’t contain cartoonish characteristics. Others will say this is a departure for the director as he laments an era and a town that changed forever with the brutal Manson family murders, with what might be his least violent film yet (don’t worry, there’s still some blood and carnage to go around). Wherever you may fall on “Once Upon A Time In Hollywood” there’s no denying Tarantino’s passion for the time period, its details, its people and what it means to him as a filmmaker in 2019.

Rick Dalton (Leonardo DiCaprio) was once a prominent television star with the black and white western show “Bounty Law.” However, with a cancellation under his belt, offers on the table he cannot stand and an ever-changing town that has cast doubt on his abilities as an actor, he has now turned to alcohol which has only plunged him even further into depression. Cliff Booth (Brad Pitt), has been Dalton’s longtime stuntman and friend, as he drives the actor around town, doing small favors for him and gladly too as he enjoys Rick’s company. As hippies move into town and ideologies change, leading to a faithful August night in 1969 involving the Charles Manson family, the business of Hollywood transforms forever in Quentin Tarantino’s fairytale.

I mentioned before, that “Once Upon A Time In Hollywood” might be Quentin Tarantino’s most personal film yet, due to his love of Los Angeles and its history. That intense feeling not only comes through in the film’s uncanny re-creation of the sets, costumes and soundscape that occupied the area but also its people. And here we have two of the best characters that Tarantino has ever written: once major western television star, now alcoholic and insecure Rick Dalton and his stuntman, the effortlessly cool, simple yet devoted friend Cliff Booth. The friendship that these two share on screen is one of the best that Tarantino has ever shown. Dalton is a man who once had everything and now feels like he has nothing as his career takes a turn for what he feels is the worst (being offered to star in spaghetti westerns) while Booth is a man who enjoys a much less luxurious lifestyle than his dear friend, yet is able to enjoy whatever life throws at him. Or in this case, whatever Quentin Tarantino’s creative mind decides to throws at him.

Both Leonardo DiCaprio and Brad Pitt are part of a dying breed of movie star actors who can sell a movie on their names alone but it’s very clear that they don’t phone in their performances. They remain committed to the art of acting despite the fame and wealth that comes along with it. It’s this quality of both movie star and actor that Tarantino taps into with “Once Upon A Time In Hollywood” leading to both men delivering what are two of the best performances of their careers.

In DiCaprio’s case, like Tarantino, we have not seen him on the big screen in four years, since his Oscar-winning turn in “The Revenant.” He was gone just enough that we, the audience, truly missed both him and his talent. Both qualities shine through in a dual performance as we see Rick Dalton the actor (the intense and magnetic DiCaprio we have come to expect) and Rick Dalton the human being. And it’s here that we see something from DiCaprio we have never really seen before: insecurity. Drowned in booze and cigarettes, Dalton feels his glory days are behind him as a glorious chapter in his career comes to an end. Reluctant to face that end and adapt, he’s a mixture of both angry and sad at the prospect of the end, failing to see it as a new beginning. All of the nervous tics, grunts, sneezes, sniffs, twitches and stuttered lines of dialogue make this a standout amongst the actor’s already impressive filmography.

Brad Pitt is cool. There’s no other way to put it. Here, we see him decades later since “Thelma and Louise” with his shirt off once again, carrying the screen with charisma, suaveness and an aura that can’t be matched by many, if any, today. Despite doing a terrible thing in his past, Tarantino goes to great lengths to make sure we love Cliff Booth, including his devotion to his career as a stuntman (yes, there is a scene where Booth fights Bruce Lee on a Hollywood backlot), to his friends and to his dog, who might just steal the entire movie right from under DiCaprio and Pitt.
​
It’s not all sunshine and rainbows in hippie populated 1969 Los Angeles though. I am sad to report that for almost as much “Once Upon A Time In Hollywood” does remarkably well, there’s a creative decision here or an elongated scene there that holds Tarantino’s latest from being one of his best for me. A common criticism amongst his latest work has been the runtime that doesn’t amount to much and could be exercised for the sake of a tighter and more cohesive narrative and cinema watching experience. “Once Upon A Time In Hollywood” meanders for one too many scenes resulting in a length that feels bloated for the type of story it is telling. Some of it also feels repetitious too, like we’ve been treading over the same covered ground as Tarantino has scenes that borrow from the western genre and the World War II genre. Would it kill the guy to explore something different for a change?

And yes, Brad Pitt and Leonardo DiCaprio’s characters are the two leads of the film. Everyone else is pretty much a glorified cameo, including the third billed Margot Robbie. I still maintain that she’s perfect casting as the beautiful, talented and tragically murdered Sharon Tate. It’s evident that Tarantino has an affection for her as a symbol but as a character? That leaves a lot to be desired. Make no mistake, her role in the film is just as big as Al Pacino as a Hollywood producer, or Timothy Olyphant as a western scene partner with Dalton or Bruce Dern as a blind ranch owner. All of them make the best of their screen time and each helps to make Tarantino’s time capsule feel that much more vibrant and lived in. I just wish there was more.

There’s a lot about “Once Upon A Time In Hollywood” which I have not revealed here. It’s best to go into Tarantino’s latest as blindly as possible. Half the fun is enjoying the technical merits of the film, from Robert Richardson’s ever-changing film stock and transitions from color to black and white to the pulsating and faithful re-creation or the costumes and sets to the rock n’ rolling soundtrack. And then, of course, there’s the double whammy of DiCaprio and Brad Pitt, who’s on screen friendship, chemistry, and wonderful character work are equal both tragic and wonderfully comedic. However, Tarantino simply can’t help himself as his 9th film is too stretched out, packed with ideas, characters and scenes that don’t always flow with the same level of smoothness that his earlier films provided. This could most likely be due to the untimely passing of his longtime editor and collaborator, Sally Menke or it could be a snapshot of an artist at a crossroads, much like his protagonist in this film, where he’s so fixated on trying to recapture what made him famous in the first place that the formula is becoming stale and a continuously changing modern society is simply passing him by.