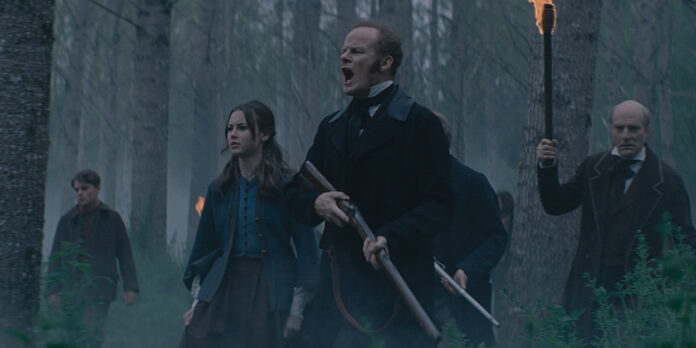 ​We’ve seen many werewolf films over the years. They typically range from being either not very good or entertaining but too campy for their own good, mainly because they’re usually a part of some sort of a mainstream franchise. Sean Ellis (“Anthropoid”) takes the production value of a mainstream horror film like “The Conjuring” and blends it with the dark atmosphere you would typically find in an independent horror film like “The Witch,” to give us something in-between with his latest film, “The Cursed.” The result is the werewolf film we never thought we needed and although not perfect, this supernatural beast of a movie certainly has teeth and is hungry for blood.

While many will claim this is a werewolf movie, Ellis sees this as more of a human drama. For this time period specifically, that drama is filled with violence and unsettling truths about colonialism and brutal injustice. In the late nineteenth century, lord Seamus Laurent (Alistair Petrie) leads a massacre of the Romani people settling on a large chunk of his land (shot as an unbroken and impressive wide shot) and the violence is harrowing and brutal. Ellis does not shy away from hacking off limbs or burying people alive. This was a brutal time in history and Ellis does not shy away from that in its most human form and later, in its most supernatural form. After the slaughter, a curse is placed on lord Laurent’s family, which takes the shape of a werewolf that terrorizes his family members, picking them off one by one. Eventually, traveling pathologist John McBride (Boyd Holbrook) makes his way to the Laurent family and offers his services to track and kill the beast.

Finding a balance between mainstream horror films and independent horror films, “The Cursed” (originally titled “Eight For Silver,” which gets its name from a nursery rhyme the kids sing to each other) is somewhere in between. It features sleek production values in its costuming, cinematography, production design, sound work and makeup-effects. However, the one area where the film suffers technically is in the visual effects department. Whether the production team ran out of money to fully complete the look of the werewolf or decided to put that money elsewhere (this movie can look quite hauntingly beautiful at times) is up for debate. Whenever the werewolf appears on the screen, the camera starts to get jerky; the filters become distorted, and the werewolf’s visual is obscured by fast cuts, possibly to give off a more threatening effect but my guess is it was to hide our scrutiny of the visual effects. However, if one can overlook that, they will find that Ellis has permeated his film with an ominous mist of doom and gloom, aided by his own atmospheric cinematography. The methodical editing also keeps the dread consistently building throughout, until the next jump scare occurs. Fans of the body horror genre will find a lot to appreciate here, especially as Ellis references some of the great filmmakers such as John Carpenter and David Cronenberg with some of his makeup and practical effects. It can be quite gruesome at times but the willingness to capture as much as possible in-camera is a welcome choice that lends itself very well towards the tone which Ellis is striving for.

While “The Cursed” delivers on its dark tone and nods to great horror films of the past to create a werewolf movie that horror fans can finally take seriously, it does suffer from a lack of characterization. While the story follows most of the Laurent family members and McBride, it never fully settles into a single perspective, often leaving the characterization a bit lacking. The film’s opening sequence (set 35 years in the future) leads us to believe we will be following one character and then it shifts perspective to another and keeps doing this from scene to scene. So, although this movie’s plot and style are all reasonably sound, I would’ve preferred to have seen some more character development as a means to get more fully invested in the human drama that Ellis was so keen on portraying. It’s ok, though. This film still managed to stick its teeth deep within me and I enjoyed a lot of it for the most part. I suspect the fans of both mainstream and independent horror films will be able to meet somewhere in the middle on this one.