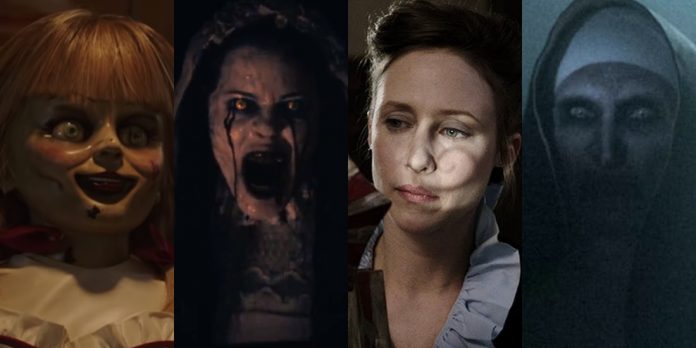 While the concept of a shared universe has been popularized by superheroes and sorcerers, filmmaker James Wan has quietly applied this model to the horror genre. The “Conjuring” series, also known as the “Conjuring” universe, is a series of interconnected films that follow demonic spirits and the mortal victims who encounter them.

While the time periods and protagonists of each film change, Wan makes sure there are enough references and easter eggs to reward loyal viewers. And with the latest installment, “The Curse of La Llorona”, hitting theaters, we decided to rank each of the films in the “Conjuring” universe from worst to best.

“Annabelle” was the first attempt at expanding the “Conjuring” mythos, and as such, the film buckles under its own expectations. The premise is decent, with the focus being on the titular doll, and the havoc it wreaks on a family in 1960s Santa Monica, but there is little else that keeps it from being a plodding and generic release.

John R. Leonetti’s direction lacks the panache that Wan brought to the previous film, while the lead performances by Annabelle Wallis and Ward Horton are so flat that they take away from the inherent terror of a killer doll. The biggest sin a horror movie can commit is being forgettable, and by that measure, “Annabelle” is guilty as can be.

When it comes to horror films, less is always more. Unfortunately, nobody told this to Gary Dauberman and Corin Hardy, the writer, and director of “The Nun.” They took a character that terrified audiences in “The Conjuring 2” and made her a predictable bore through bland staging and an overreliance on jump scares.

By the end of the film, the Nun feels less like a threat and more like a trick-or-treat prop. It’s a shame, really, given the capable performances by the cast. Demian Bichir brings depth to the troubled Father Burke, while Taissa Farmiga follows her sister’s lead by playing a capable (and terrified) heroine. Not as boring as “Annabelle”, but not worth revisiting either.

“Annabelle: Creation” is a big improvement on its predecessor. The film succeeds as both a chilling horror story and a satisfactory origin for the Annabelle doll. Set in 1943 California, the film revolves around a group of orphaned girls who find the doll, and begin to unravel the disturbing secrets that it possesses.

David F. Sandberg takes over as director, bringing the same visual grace that he did to his 2016 debut, “Lights Out.” His thematic nods to the other “Conjuring” films are slight, and instead of coming off as hokey, they feel like clever ways of tying the stories closer together. In terms of the larger universe, “Annabelle: Creation” is the most effective release yet.

“The Conjuring 2” doesn’t deliver the classic scares of the first film, but it is a triumph of mood; with director James Wan elevating the dread and suspense to unbearable heights. The story follows paranormal investigators Ed (Patrick Wilson) and Lorraine Warren (Vera Farmiga) as they travel to Britain to confront a demonic force known as the Crooked Man.

Various subplots and secondary ghouls appear throughout, but the film is at its best when it focuses on Wan’s mastery and the chemistry between Wilson and Farmiga. They provide warmth in the midst of otherwise chilling events, and they enable Wan to test the audiences’ empathy. “The Conjuring 2” may not be perfect, but it’s definitely a worthy sequel.

Wan’s original “Conjuring” was nothing groundbreaking on the surface. The story followed Ed and Lorraine Warren as they fought off an evil spirit named Bathsheba, and contained all the tropes associated with possession films. What set “The Conjuring” apart, however, was its emphasis on style, and the creative ways in which it used these tropes.

Wan is at the height of his powers here, teeing up unsettling visuals and subverting what we expect as horror fans. The clapping sequence provides one of the best scares of the decade, with masterful pacing and a knockout payoff that even the trailer couldn’t spoil. Of all the films in the “Conjuring” universe, this is the one that will hold up the best.

So what do you think? Do you agree with our ranking? Are you seeing “The Curse Of La Llorona” this weekend? Let us know your thoughts in the comments section below or on our Twitter account.