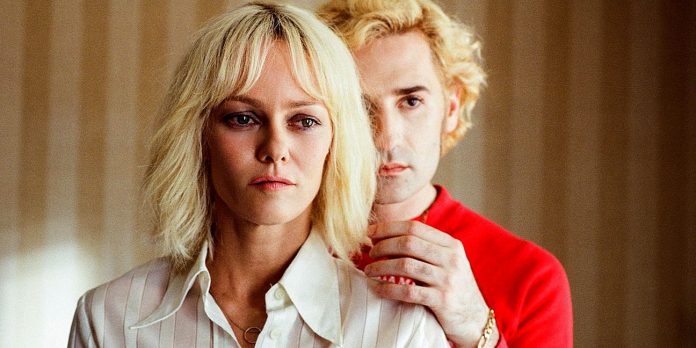 The recent release of the French slasher movie “Knife+Heart” is notable for more than the fact that it’s a great thriller–it’s also one of the rare horror films that is unabashedly queer in both its content and its characters. Set in the world of 1970s gay porn, every single main character in the film is queer. Sexuality is uninhibited without being excessive, and even the “villain” of the film is an embodiment of both societal and internalized homophobia. While its existence is to be celebrated on its own, it cannot be ignored that it is filling a void in the horror landscape that has been mostly empty for a long, long time. In the mainstream, we have yet to see a scary movie that is willing to engage with queerness with the same overtness as “Knife+Heart.” If a horror movie features such themes, it is either a very small independent film, or it is a mainstream film with subtextual queerness or queer characters and plots that are far from the main storyline. For the purposes of this piece, I will be discussing horror films that are American and saw a wide release to help illustrate my point that mainstream horror has yet to tackle queerness in a real way. Also, I will be using the word “queer” as a blanket term to refer to anything not heterosexual and/or cisgender.​

​In the early days of Hollywood, queer folks had to settle for extremely subtextual depictions of themselves in film, and they were usually painted in a less-than-flattering light. Alfred Hitchcock seemed to be a big fan of this trope. In “Rebecca”, the devious Mrs. Danvers seems to have a more-than-friendly obsession with the late Mrs. de Winter. “Rope” features a pair of male murderers who are in what is probably as close to a same-sex relationship as was allowed to be shown on film in 1948. The villain in “Strangers on a Train” is an effeminate man who is hyper-focused on the main hero and wants to be sure that he’s not ignored by our leading man. And Norman Bates of “Psycho” is a cross-dressing man obsessed with his mother, both telltale stereotypes of homosexuals in film at the time. What is the fate of these characters? They all end up either dead or in police custody. Using queer stereotypes as characteristics for their unrepentant villains makes the motives of Hollywood at the time clear: these people are to be feared. Their very existence is horror enough for these movies.

With the dawning of a relatively more open-minded time in the post-Hays Code era, you would think that queer characters would start to be portrayed in a more flattering light. Unfortunately, even with the ability to explicitly depict queer characters without the fear of censorship, films still tended to make their characters queer in subtext only and, again, mostly villainous. This can be chalked up to many factors, least of which is the lack of power that queer people still had in mainstream society. Studio horror films did not want to take the risk of being labeled “niche” by featuring any aspect of queerness that didn’t condemn such things, whether subtly or overtly.  At the time, a common way to include these types of themes was by putting them in the context of a vampire movie. Both “The Lost Boys” and “Interview with the Vampire” featured vampires in male-focused relationships, happy to share their immortal life in the company of other men in exchange for eternal youth and beauty. This type of coded queerness was not new to vampiric characters and it served as an easy way for audiences to subconsciously tie these characters to something that they feared in real life. It may not have been the filmmakers’ intent (“The Lost Boys” director Joel Schumacher is himself a gay man), but it is a shame that queer characters continued to be portrayed as the villains.

​An infamous example of subtextual queerness in mainstream horror is found in “A Nightmare on Elm Street 2: Freddy’s Revenge.” The main character of Jesse is a clear stand-in for a gay character without ever being explicitly revealed as such. Both in the way he is shot (at one point Freddy seductively runs his knife-hands over the character’s mouth) and in his actions (after a failed romantic interaction with his friend Lisa, he abandons her to run to his male friend), he is a character who most queer men can point to as experiencing similar moments to themselves when they were in their coming out process. This is a rare instance of a coded queer character not being the villain of a horror film, but again, his queerness is never allowed to be explicit.

Perhaps the greatest injustice when it comes to queer characters being depicted in horror films comes from the way that trans characters and, in general, non-binary gender identity have been portrayed. The most famous example comes from “The Silence of the Lambs,” in which Buffalo Bill, the main villain of the film is, in the movie’s depiction, a person so confused and unsure of their gender identity that they kidnap and murder young women in an attempt to seemingly steal their femininity from them. The movie itself even mocks the possibility that Bill could actually be a trans woman, with Dr. Lecter surmising that Bill merely “covets” that which they do not possess. While the movie is undoubtedly a horror classic, it cannot be understated the damage that this has certainly done over time to the trans community. To a large number of the non-queer population, this is surely the only character in a film that they will ever see who is not cisgender, and it is therefore extremely unfortunate that perhaps the most visible non-cis character in the history of film is an irredeemable serial killer. Another example of such insensitively-written gender identity themes is found in “Sleepaway Camp”, which is a much less popular horror film, but nevertheless still mainstream. The final scare of the film comes from the revelation of the fact that the character Angela has a penis. Once this is revealed, the film immediately cuts to the end credits, making it very clear that the filmmakers meant for this depiction of non-cisgender identity to be the biggest scare in the movie. Without question, mainstream horror films have too-often been extremely unhelpful to the trans community.

As both a gay man and a lover of all things horror, the fact that I have yet to see an explicit depiction of queerness in a horror film intended to be seen by a wide audience has always been disheartening. And while it is fun to watch older movies that depict queer characters as villains and mock such sensibilities, I can only be amused by this tendency so many times. So what can you do now if you want to see more queer horror films? Do your best to support “Knife+Heart,” preferably in a theater if it’s playing near you, or eventually on streaming. We would be lucky to get a mainstream movie that’s as well-made or as queer as that one.