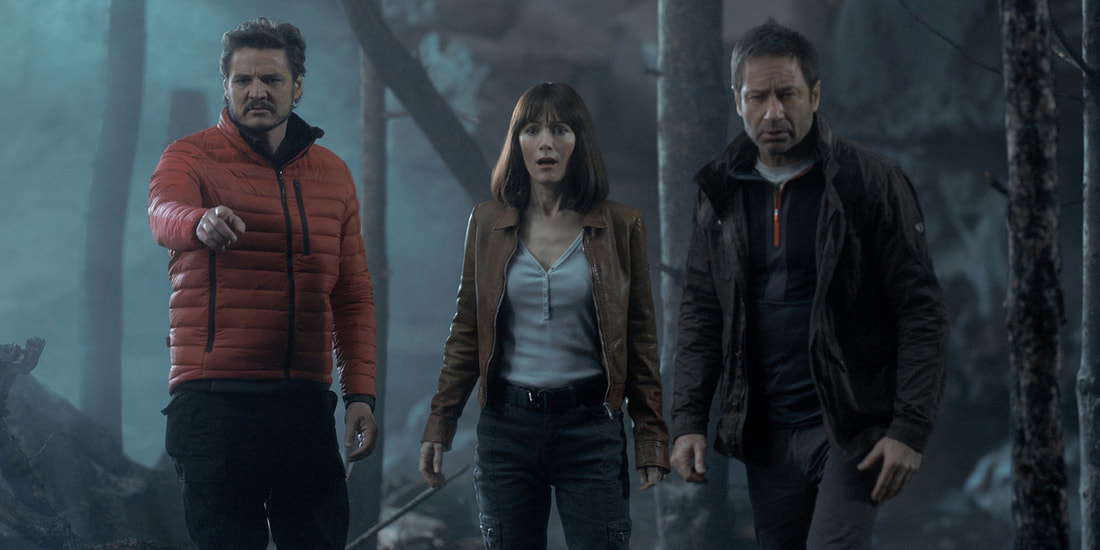 THE STORY – A group of actors and actresses stuck inside a pandemic bubble at a hotel attempts to complete a film.

​​​The marketing strategy for “The Bubble” raised curiosity when distributor Netflix released fake trailers for Cliff Beasts 6, the film that is being made in “The Bubble.” With a release date of April 1st, this fake trailer sparked interest and was able to advertise the actual film by director-writer Judd Apatow in a clever way. Netflix has released several mockumentaries over the past few years on the subject of the pandemic, particularly with Charlie Brooker’s “Death to 2020” and “Death to 2021″. Not liking either of those projects, is” The Bubble” a better take on the pandemic mockumentary?

If there is any reason to sit down and watch “The Bubble,” it is for the star-studded cast. It may be expected for Apatow to cast his wife and daughter here, but some of the other casting choices will spark some excitement. Karen Gillan and Pedro Pascal have both been taking on some exciting projects recently, while Maria Bakalova returns to the screen after a fantastic award season last year with “Borat Subsequent Moviefilm.” Pedro Pascal is the stand-out from the line-up. Gillan also does a good job in the film, but her performance does suggest that she wanted the story to go further with the narrative. However, the rest of the cast is forgettable, primarily due to the clichéd characters and poorly written dialogue. Keegan-Michael Key is over-the-top in a way that makes him unable to vanish into his character, while Bakalova’s character lacks any intrigue or depth.

The film’s central plot follows Carol Cobb (Karen Gillan) as she returns to the Cliff Beasts franchise. Having missed the previous installment, with the promise that production would only last three months and would restore her career. Instead, trouble arises when she has to be placed in a pandemic-secure bubble with the cast and crew for much longer than they anticipated. With positive test results, relationship issues, numerous on-set injuries, and demand for the script to be rewritten, the camera crew document the entire production as chaos ensues. The film merges this running narrative with scenes from the fictional Cliff Beasts 6, highlighting how bad the movie is going to be and how poorly the production is running.

Apatow’s previous film, “The King of Staten Island,” had a surprising amount of heart and a powerful screenplay. That passion came through due to lead actor Pete Davidson and the apparent connection he had to the story and to bringing authenticity to the subject matter. “The Bubble” feels like a significant step down for Apatow as he leans into the mockumentary genre, depicting the film industry during the COVID-19 pandemic. This film already feels outdated in terms of humor, particularly with the pandemic jokes. There is something to be said about how the industry handled the situation and where it is now with the demand for sequels and blockbusters, but the script is too afraid to delve deep into these topics. Instead, the film sacrifices all potential nuanced conversations for jokes about TikTok and influenza.

What turns “The Bubble” from just a bad comedy to a tough watch is the runtime. If the film had fewer subplots and were a short 90-minutes, it would be easier to forgive the outdated humor. However, the film runs for over two hours, and you feel that runtime. The film would be more impressive if the fake film Cliff Beasts 6 felt epic, yet that is lacking in action, cinematography, and even the visual effects. If “The Bubble” was released this time last year, perhaps the humor would have landed better. However, this is another reminder of why pandemic-themed mockumentaries do not work when they are time-sensitive and when we are still trying to determine the new normal. It may be something you can stick on in the background at home while focusing on other tasks, but there must be better things to watch that are releasing this week. And yes, this is a week in which the big release is “Morbius.”

<b>THE GOOD</b> – The star-studded cast is sure to bring in viewers, with Pedro Pascal giving the best performance. </p> <b>THE BAD</b> – The film already feels outdated with the humor, the technical aspects are weak, and the runtime is too long to keep any form of engagement with the story. </p> <b>THE OSCAR PROSPECTS</b> – None​"THE BUBBLE"