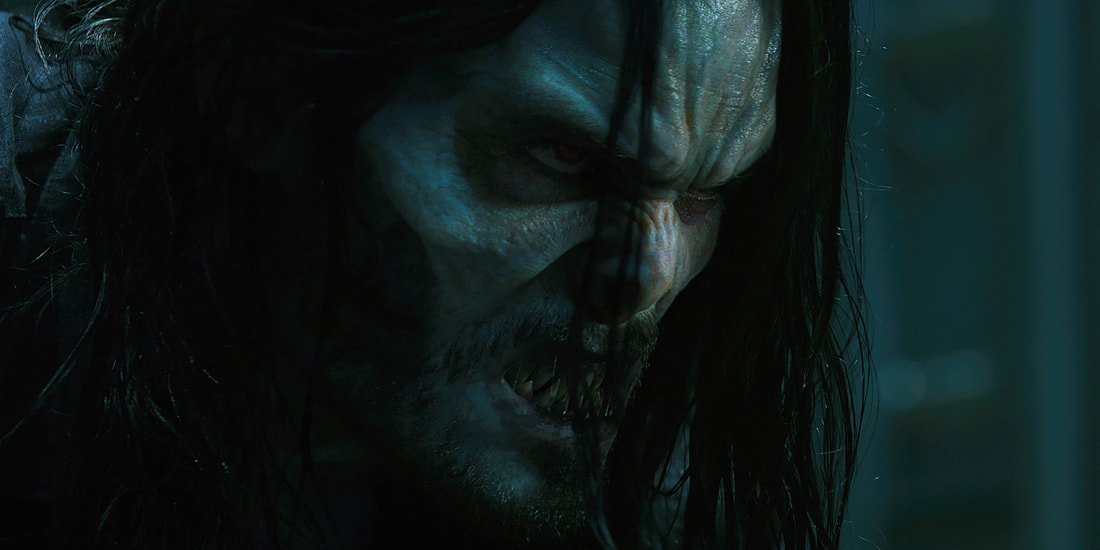 THE STORY – Biochemist Michael Morbius tries to cure himself of a rare blood disease, but when his experiment goes wrong, he inadvertently infects himself with a form of vampirism instead.​
​
THE CAST – Jared Leto, Matt Smith, Adria Arjona, Jared Harris, Al Madrigal & Tyrese Gibson

​After numerous release delays due to the COVID-19 pandemic, it’s time to find out if Daniel Espinosa’s (“Life“) foray into the world of comic book blockbusters is a cure or a curse for the Marvel cinematic landscape. Unfortunately, “Morbius” remains a cursed project, even despite heading in with low expectations, given Sony’s lack of confidence in the project as they continuously held off on releasing this film until now. Like Dr. Michel Morbius, they were unable to control the beast they had created. Now that it’s out in the world, they must deal with the consequences of releasing a subpar supervillain movie in an overly saturated market where the bar has been considerably raised.

Dr. Michael Morbius (Jared Leto) is a scientist who is suffering from a rare blood disease that, given enough time, will eventually claim his life. He’s been searching for a cure by extracting the saliva from bats and fusing together different species’ DNA in hopes that he’ll be able to give himself and his best friend, the far richer and just as sick Milo (Matt Smith), another shot at life. Along with his partner and fiancée, Martine Bancroft (Adria Arjona), Dr. Morbius finds a cure, but that cure instead turns out to be a curse. He’s given superhuman abilities such as speed, strength, and his once skinny body is now completely transformed. But, he’s also given fangs, claws, and a thirst for blood, effectively making him a vampire without all of the superstitious weaknesses typically associated with vampires (direct sunlight, mirrors, holy water, etc.). Unable to control the brutal monster he’s become, the man who would do just about anything to save a life is now struggling to stop himself from taking lives as the need for artificial blood to keep the beast under control is wearing off, and soon he’ll have to turn to human blood to survive.

“Morbius” feels like the kind of comic book movie we used to receive in the early 2000s before Marvel completely re-invented themselves, and Christopher Nolan set the standard for what a comic book adaptation could be. The script is too convenient and thinly plotted with simplistic motivations that don’t effectively examine the moral and ethical challenges Morbius and Milo are having to navigate through in their opposite desires to be cured. So much of that conflict is brought down to the barest of simplicities, and the film does not seem to be interested in diving deeper into its themes. It instead opts to deliver some thrilling moments of action and occasional beats of horror, hoping those moments of excitement will be enough to satisfy our own bloodlust for quality storytelling. There are some inspiring slow-motion shots during mid-air fight sequences that aid the audience in keeping track of the action (one long camera move down into a crowded New York City subway is a particular highlight). Still, those points of creativity are few and far between. And then there are the instants of horror that “Morbius” is trying to lean into as its story centers on a character that is not a sexy bloodsucking vampire but a monstrous bat-like creature who can maul you with the very swipe of his claws. However, the tame PG-13 rating prevents “Morbius” from standing out amongst other comic book movies, making it feel more like a missed opportunity to give audiences something, although maybe not executed perfectly, fresh. There’s a decent utilization of visual effects, makeup, and sound work to bring “Morbius” to life. Still, with such emotionally stilted dialogue and rushed plotting, they don’t leave the impact I’m sure the filmmakers wanted.

And then we come to Jared Leto, who is one of the most committed actors on the planet, for better or worse. Surprisingly, the intensity he usually brings to his various roles is absent here. He doesn’t imbue Dr. Michael Morbius with any distinguishable characteristics and instead plays him straight and closer to the real-life Leto than we’re used to seeing from the Academy Award-winning actor. This should come across as a relief as it would seem to be a nice change of pace for the actor, but it instead robs the film of any energy or momentum. However, “Doctor Who” star Matt Smith comes to save the day as the exuberantly evil Milo, who starts off as Morbius’ best friend and turns into his fierce enemy as he wants a taste of Morbius’s new circumstances despite the repercussions it may bring. Chewing the scenery, relishing in every wicked gesture, and even dancing shirtless, Smith is making the most of his first superhero film role and is the shot of adrenaline this morbid and dour film so desperately needed.

Thankfully, “Morbius” does not overstay its welcome. At less than two hours, the movie keeps up a strong pace, but so many subtle nuances in the characters and themes are lost in the process. There are cheap lines of dialogue, such as Morbius telling the two cops hot on his trail (played by Al Madrigal and Tyrese Gibson), “I’m hungry. And you wouldn’t want to see me when I’m hungry.” The ending is rushed to the point that it almost fails, ashamed of itself, and wants to let its audience go home rather than stay longer to explore the inner workings of Dr. Morbius’s mind and how he’s going to go on morally, ethically and physically given his new life. But hey! At least we got a few scenes of cool sonar-like visual effects, human bloodsucking, destruction, and mayhem in the city streets between supernatural beings stripped from a comic book for our entertainment! Because as long as we’re given all of that, nothing else matters, right? And there’s plenty more where that came from as “Morbius” closes with one of the most unexciting post-credits scenes I’ve seen in a comic book movie in quite some time. Douse this one with holy water and pray for the best.

"MORBIUS"<b>THE GOOD</b> – Decent sound work, visual effects and makeup are used to bring Morbius to life. Some thrilling moments of action. Matt Smith is clearly relishing in playing an evil character. </p> <b>THE BAD</b> – Emotionless performances and storytelling. Convenient screenwriting with little to no exploration of the characters or themes. </p> <b>THE OSCAR PROSPECTS</b> – None