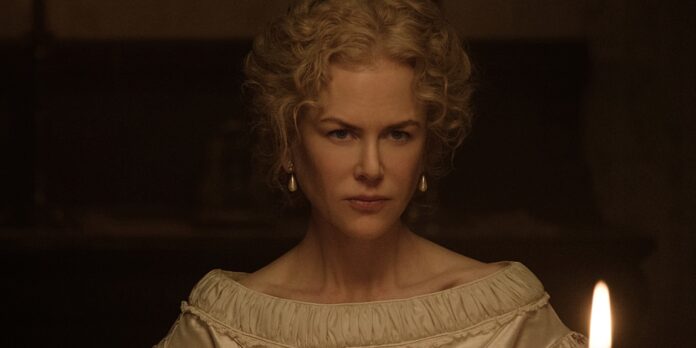 THE STORY – An injured Union soldier arrives at an all-female Southern boarding school during the Civil War. Soon, sexual tensions lead to dangerous rivalries as the women tend to his wounds and offer him shelter and companionship.

​“The Beguiled” is a dark and artistic piece of work from the ever evolving second-generation filmmaker, Sofia Coppola. While the writing of the film may not prove to be anything as successful as “Lost In Translation” (Which earned Coppola an Oscar for Best Original Screenplay), “The Beguiled” represents a big leap forward in Coppola’s skills as a director of mood, tension, and visuals. There is a lot of subtext underneath the words and actions of every character in “The Beguiled” resulting in a film that is always boiling with tension and surprisingly also provides us with some much needed awkward humor and relief from the tense proceedings.

A remake of the 1971 film of the same name starring Clint Eastwood, which was based on the 1966 Southern Gothic novel written by Thomas P. Cullinan, originally titled “A Painted Devil,” “The Beguiled” takes place in the deep south, three years after the Civil War has started. A Union soldier named John McBurney (Colin Farrell) is found with a nasty leg wound by Amy (Oona Laurence). Amy brings the wounded soldier to Martha Farnsworth’s (Nicole Kidman) large home which acts as a seminary for young woman. Among them is the oldest Edwina Dabney (Kirsten Dunst), the wild one, Alicia (Elle Fanning) and three younger girls along with Amy named Jane (Angourie Rice), Emily (Emma Howard) and Marie (Addison Riecke). Startled by the handsome young man’s presence within their home, each woman starts to take a liking towards him. When John begins to get too mixed up in the lives of these women, his predicament starts to become worse as he wishes to stay and avoid capture from the South, while Martha and the other ladies wrestle over what to do with him.

Sofia Coppola and cinematographer Philippe Le Sourd give “The Beguiled” a hazy, darkly lit atmosphere punctured by pink hues resulting a uniquely looking film that is gorgeous to look at. Shot in a 1:66:1 aspect ratio and with the gorgeous backdrop of the deep south, “The Beguiled” stuns at every turn. Even its interiors have a southern gothic look that taps deep into our primal fears. Sofia uses this to her advantage to give “The Beguiled” a beautifully measured sense of control. Some might consider this as being too understated and unfortunately, the screenplay although eloquent in how it conveys its themes, is also understated. The trailers would lead you to believe that the story gets more twisted as it goes, resulting in shocking body horror. While this might not be a body horror film (Although, some will claim it still is) it’s really a psychological thriller from a female’s perspective. These women feel betrayed and trapped by this handsome young man who is not only their enemy in war but also their enemy in life.

Sofia does a phenomenal job of presenting both sides of the film’s themes through the eyes of Corporal John McBurney and also through the various other female characters who are drawn to him. The performances of the cast really seal the deal though as this is a true ensemble with no real standout. Everyone serves their role to the very best of their abilities and everyone is well cast with not a single weak link in the cast. If the award for the SAG Best Ensemble were handed out today, I’d argue for it to go towards the cast for “The Beguiled.”

Like another film that expertly presented the relationships, perspectives, and forces of nature which are forced upon men and women in “My Cousin Rachel,” Sofia Coppola proves once again why she is a talented writer with “The Beguiled.” Some may write it off as being nothing but southern gothic genre fare. Some will complain that not enough happens or it does not meet their expectations. However, one thing that cannot be denied is Sofia’s growth as an artist and as a voice within the filmmaking community.