The Awards-Worthy Crafts Of “The Northman” 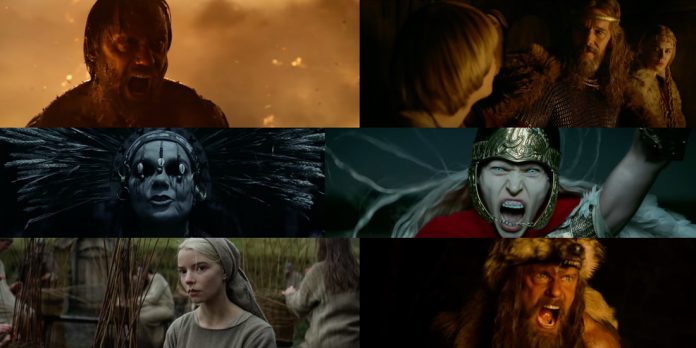 In an interview with The New Yorker, director Robert Eggers recounted a reaction from a test screening audience member of his latest film “The Northman,” who wrote: “You need to have a master’s degree in Viking history to understand, like, anything in this movie.” The film’s final product, which was released internationally on April 22nd, went under significant re-working to make it more accessible to popular audiences. Still, like Eggers’ last two films, “The Witch” and “The Lighthouse,” “The Northman” is steeped in a rich historical basis and gifts audiences with an experience of total immersion. Eggers and his team conducted extensive research and preparation to bring this medieval, nordic world into existence to enable such accuracy. Will such meticulous effort be recognized come awards season?

Eggers wrote the film with Sjón, himself an Icelandic poet, novelist, and lyricist, whose film credits include writing the lyrics for Lars Von Trier’s “Dancer in the Dark” and the screenplay for Valdimar Jóhannsson’s “Lamb,” as well as a number of novels about witchcraft and spiritualism. To ensure the story’s adherence to historical fact, three historians were consulted: Neil Price, Chair of Archaeology at Uppsala University in Sweden, Terry Gunnel, Professor of Folkloristics at the University of Iceland, and Jóhanna Katrín Fridriksdóttir, author of “Valkyrie: The Women of the Viking World.” With their help, the film’s crew was able to produce sets, props, costumes, and an environment that seemed as if it was pulled straight out of a history book. Such historically accurate writing was present in Eggers’ previous two films, but they were each not recognized by the Academy with screenplay nominations. Very little has changed here in terms of Eggers’ style and presentation. With a straightforward plot (the typical revenge story) and being released this early in the year, I don’t believe this will be the time the Academy finally warms up to his writing.

As a director, Eggers possesses a passionate and committed vision that his fellow directors may take notice of the more films he puts out. The 38-year-old director looked to his trusted team from “The Witch” and “The Lighthouse” to fill key roles in “The Northman’s” production, including production designer Craig Lathrop, costume designer Linda Muir, and cinematographer Jarin Blaschke (who was nominated for Best Cinematography for his work on “The Lighthouse,” the only Oscar nomination an Eggers film has received to date). Each of them was integral to crafting the world of “The Northman” in Eggers’ effort to deliver what he wanted to be the definitive Viking film. While parts of the set had begun construction in late 2019, the COVID-19 pandemic forced the production to a standstill. Upon its return, production took a page from HBO’s “Game of Thrones” and decided that the more significant part of the film would be shot in Northern Ireland, which, among many other places, can easily stand-in for the dramatic landscape of Iceland.

Primary sources from the Viking era are few and far between. As a sea-faring people, little if anything remains of permanent structures or art. Said Eggers of his references: “The images we turned to for the film’s design came from military history books and museum illustrations.” To produce a whole world of sets, Lathrop turned to various skilled manufacturers for the smallest of details, such as blacksmiths who created the hardware for the doors, period-accurate furnishers, two Viking ships that were handmade in the Czech Republic, weaponry forged in Dublin under the supervision of weapons master Tommy Dunne, and computer-designed tapestries woven and embroidered in India. Every detail of the film’s physical production was approved by a scholar, even the ship’s rivets. To ensure the maintenance of the green lushness of Fjölnir’s farm, which was built in a small parish in Ulster, the film’s greens department had to water the set consistently due to an unusual drought over the summer in Ireland. Said Lathrop: “It’s the first set I’ve ever had to water – but it was a feat of eco-friendly production design.” Should the production design of “The Northman” get recognized come the end of the year, it would be an inspiring choice considering how many vast exterior sets there are. Such striking work receiving an Oscar nomination for Best Production Design would resemble other recent historical epics over an epic landscape such as “The Revenant” or even last year’s desert-filled “Dune.”

Like the non-existent evidence of Viking structures, costume designer Linda Muir saw herself challenged by the lack of both physical and written evidence of Viking-age clothing. Her work on the film remains its most likely shot at an Oscar nomination, considering the sheer size of the production. 918 individual hand-sewn garments were made in total, while this shoot also provided Muir with her first experience designing helmets and armor. She turned to the Sagas of the Icelanders, a body of medieval literature written two hundred years after the film’s events take place, visited the British Museum for additional inspiration, and found costumes at rental houses in London, Rome, and Madrid. The most complex and elaborate was the costume of the seeress, played by Björk, who came out of retirement to work on this film with Eggers. The costume designers constructed a headdress made from barley and embroidered linen styled after a traditional Ukrainian wedding headdress for this brief appearance.

Of course, there’s always the possibility of Jarin Blaschke becoming a two-time nominee for Best Cinematography or the film’s soundscape getting recognized for its combination of grounded with otherworldly sounds to present something steeped in reality and mythos. Despite the breathtaking craft on display from nearly every department, the Academy is still unlikely to notice given the film’s disappointing box office return after its initial weekend and the challenging matter with which Eggers presents his films (despite this being his most accessible film to date). Every department behind the making of “The Northman” was directed to incorporate as much historical detail as possible, from the aforementioned sets and costumes to the score by musicians Robin Carolan and Sebastian Gainsborough, who familiarized themselves with musical instruments of the Viking-age such as horsehair lyres and pipes made of bones and animal horns. Due to the superb effort of all involved, “The Northman” presents to its audience a brutal but fully realized world primed for exploration and revisitation. Will any of it matter when it comes time to awards voting? Probably not but this will certainly not stop Eggers from continuing to deliver highly detailed and immersive worlds to further push audience forward as well as the cinematic medium. Such valiant efforts have to go noticed at some point.

What are your favorite production elements of “The Northman?” Have you seen it yet? If so, what did you think? Do you think it will be recognized come awards season? Please let us know your thoughts in the comments section below or on our Twitter account.