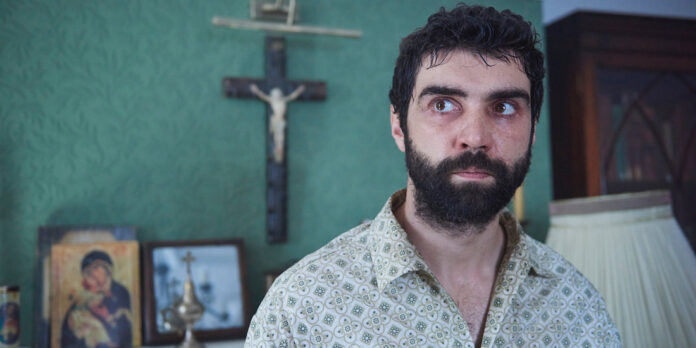 THE STORY – Terror strikes when a former soldier takes a job to help a young woman and her housebound mother.​
​
THE CAST – Carla Juri, Imelda Staunton & Alec Secareanu

​​​It has been noted recently that the horror genre has received some intensified attention. It has always been a genre that consistently engages an audience, but lately, it seems to have found a space for more prestigious storytelling with more refined tastes. However, that’s not the only phenomenon the genre has seen lately. Not only has horror found innovative methods to tell its stories, but it has also been a breeding ground for emerging filmmakers to showcase their directorial flare, and this has been a particularly enticing invitation for actors. Both are once again true for “Amulet,” a new stylish thriller that, unfortunately, doesn’t quite come together despite some potential on display.

The story centers on Tomaz (Alec Secareanu), a former soldier who’s now homeless on the London streets. Past traumas seem to have led to his unfortunate situation but soon he crosses paths with an endearing nun, Sister Claire (Imelda Staunton). Seeing him in desperate shape, she offers him a proposition. There’s a young woman named Magda (Carla Juri) living in a worn-down house with her ailing mother and the Sister offers his services to maintain upkeep of the house for room and board. This situation eventually leads to the bonds between Tomaz and Magda strengthening, but it also reveals further dark secrets about the demons that are lurking in both their pasts and the horrors that eventually show themselves.

Romola Garai makes her directorial debut here, and it’s clear that her instincts in this genre are for the creation of atmospheric tension as opposed to pedestrian jump scares. In that effort, she impresses with her ability to craft a great deal of tension through the filmmaking, aiding to a gothic tone that harkens back to classic British horror films. This is often hindered by some pacing issues with chaotic editing that stalls momentum, but it’s still a rather fine directorial achievement with strong visuals. Unfortunately, the story finds itself lacking in successfully crystalizing many of its muddled themes along with its inconsistent world-building. There’s a running commentary on the nature of gender roles that doesn’t feel explored to its fullest potential, only to be compounded by some wild plot developments that are delivered in a clunky manner. It’s a shame that the screenplay manages to shackle some of the more impressive stylistic choices.

Some performances here actually find ways to be quite successful. Alec Secareanu gives a haunting turn that finds ways to showcase a subtle physicality that is quite effective. He ends up providing most of the emotional weight of the film, and while this doesn’t come anywhere close to what he brought to something like “God’s Own Country,” it’s still an anchor for an engaging performance that sells much of his character’s anguish. Staunton is quite reserved at first and is a tad underwhelming until she’s given a bit more substance near the end, and she does start to become more entertaining to watch. Unfortunately, it’s tied up in a climax that struggles to connect and her impact is lost slightly. Still, it’s a moment for her to flesh out the character more and she provides a charming portrayal in doing so.

Sadly, the rest of the cast doesn’t quite meet these same heights. There’s much to appreciate in Juri’s attempts to embody a mysteriously reserved woman who slowly exposes more of her good and bad traits as the story progresses. Unfortunately, most of this comes across as a bit too reserved, and her meek energy doesn’t translate into connecting with her performance on a more emotional level. The only other significant player is Angeliki Papoulia as a woman from Tomaz’s past that is seen in flashbacks. She gives a decent performance, but one that’s not terribly invigorating either. Much of this has more to do with a shallow character, but her impact is more for thematic purposes of the story and not really in regards to appreciating her performance.

There are elements to this film that can be valued, and it’s particularly in the sense of atmosphere that’s created to induce a feeling of dread without going overboard into lackluster territory like so many contemporary horror films. Coupled with some decent performances, there’s potential here to make a truly engaging piece. At the same time, the murky themes and shallow supporting players make that connection a struggle. Despite some individual parts being compelling, it never adds up to very much by the end. It’s still another example of the genre challenging preconceived notions and attempting to tell richer stories. It’s just a shame the potential of this one didn’t quite deliver in the end.