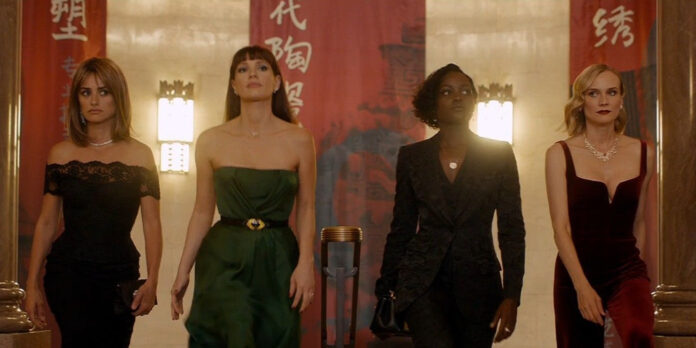 THE STORY – CIA agent Mason “Mace” Brown joins forces with a rival German agent, a cutting-edge computer specialist and a Colombian psychologist when a top-secret weapon falls into the hands of a group of mercenaries. Together, the four women embark on a breakneck mission to save the world while staying one step ahead of a mysterious figure who’s tracking their every move.
​
THE CAST – Jessica Chastain, Lupita Nyong’o, Penélope Cruz, Diane Kruger, Bingbing Fan, Sebastian Stan & Édgar Ramírez

​When it was announced in 2018 that Bingbing Fan, Jessica Chastain, Lupita Nyong’o, Marion Cotillard, and Penelope Cruz would be starring in an action film together, the internet collectively rose up as one and cheered. What a cast! These were big movie stars, including three Oscar winners, an Oscar nominee, and one of the highest-paid actors in the world. While the concept wasn’t specifically ripped from Twitter-like “Snakes on a Plane,” it felt like it was concocted by an algorithm specifically designed to give Film Twitter what it wanted. Now, three years, a global pandemic, and one casting change later (Diane Kruger had to fill in for Cotillard), “The 355” is finally here, and if you wanted to see some of the most glamorous women in the world being the BAMFs we all know they are, then you won’t leave disappointed. If you care about things like plot, characters, internal logic, and good visual storytelling, though, you’ll probably leave somewhat frustrated.

Theresa Rebeck and Simon Kinberg’s screenplay is a pro forma spy story: Every bad guy, government, and intelligence agent in the world is after a MacGuffin that could shut down anything and everything on Earth, from power grids to airplanes to stock markets. The Colombian intelligence agent who has it (Edgar Ramirez) just wants to sell it to an agency that can guarantee his safety. CIA officer Mason “Mace” Browne (Chastain) is sent to retrieve it with her friend and colleague Nick Fowler (Sebastian Stan), but their mission is upended by Marie Schmidt (Kruger), a German agent also sent to retrieve the device. When the CIA questions her loyalty, Mace goes out on her own, bringing in Khadijah (Nyong’o), an old friend from MI6 and cyber intelligence expert. The Colombian agency sends psychologist Graciela (Cruz) to talk the man out of selling the device, but when one of the field agents there to help her goes rogue, these four women will have to overcome their differences to work together and find the device before the bad guys – or their own governments – do.

You might have noticed that one of the main cast members doesn’t appear in that plot summary. One of the screenplay’s most significant failings is that it relegates one of its stars to the role of deus ex machina, keeping Fan offscreen until the film’s halfway point, at which point she explains what has “really” been going on to the other main cast members. The screenplay is utterly uninterested in showing us things when it could just tell us, so we get several massive exposition dumps and a spoken psychological profile of every main character. The thuddingly obvious dialogue is a slog, but at least those moments are over quickly. On the other hand, the action sequences are not over so quickly, and they are even more bland and flat-footed than the dialogue. Kinberg, who also directs, has taken a step up from his feature directorial debut, “Dark Phoenix,” but that’s not exactly a high bar to clear. Nearly all the action scenes involve cross-cutting between two locations, and instead of the propulsive forward momentum you want in a good action film, they feel very stop-and-go. There’s nothing that stands out about any of them; no excitement or visual interest exists anywhere. They’re not bad, exactly, but they sure are bland.

The lack of exciting action usually spells death for any action film, especially when combined with dialogue this leaden. But that cast turns out to be this film’s ace in the hole. It turns out that when you give supremely talented performers underwritten characters, they can make them watchable through sheer force of talent and charisma. Chastain is a rock-solid anchor, her wounded cynicism perfectly matched by Kruger’s bone-dry line deliveries. They’re balanced out beautifully by Nyong’o’s whip-smart earthiness and Fan’s effortless cool. The stand-out, though, is Penelope Cruz, who gives the film real heart and soul as a woman with no field training and a family waiting for her back home who’s in way over her head. It may be a stock part, but in Cruz’s hands, Graciela’s arc feels nuanced and intimate in a way nothing else in the film is. Together, these ladies make “The 355” watchable, but even their combined star charisma can only do so much. Watching these ladies school all the men around them in combat is undeniably entertaining, and the film is slick enough to be engaging despite the pacing issues. These stars can be great in anything, though. The fact that the end product of this dream team-up is so bland and uninspired makes it feel that much more disappointing.