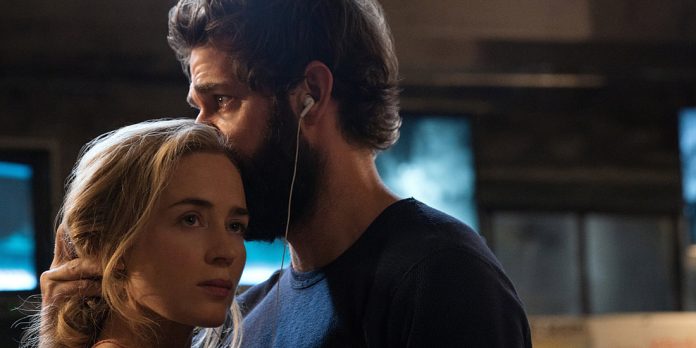 By Danilo Castro
​
It’s been said that marriage is a partnership. It is a bond between two people that requires complete trust in order to get through life’s various setbacks. The same can be said for the relationship between the director and actor, which often has to contend with power plays, external changes, and differences of opinion. The effort these different partnerships demand is what makes it so damned impressive when people can do both.

There have been countless examples of spouses who have worked together as director and actor. They can sometimes result in disaster (Guy Ritchie and Madonna’s “Swept Away” comes to mind), but these collaborations yield great results more often than not. “A Quiet Place Part II” is now in theaters, and since real-life couple John Krasinski (co-writer/director) and Emily Blunt (star) are the faces of the franchise, we felt it time to revisit the best director/actor partners who also happened to be married.

For clarity’s sake, we will not be including directors and actors who were unmarried at the time of their collaboration(s). They must already be spouses, which leaves out notable pairs like James Cameron and Linda Hamilton (“The Terminator” & “T2: Judgement Day“) or Steven Spielberg and Kate Capshaw (“Indiana Jones and the Temple of Doom”).

​Judd Apatow is one of the most important comedy figures of the 2000s. He has produced and directed a string of films that defined Gen Z humor, and in most cases, he did so with Leslie Mann as his secret weapon. Apatow and Mann got married after meeting on the set of “The Cable Guy” in 1996, and by the time Apatow directed “The 40-Year-Old Virgin” in 2004, he had a firm grasp on Mann’s specific talents. She absolutely dominated her scenes in the film, which led to an even bigger (and better) role in “Knocked Up” (2007).

Mann’s aloof timing blended perfectly with stars like Seth Rogen and Paul Rudd, and her chemistry was so good with Rudd, particularly that Apatow fashioned an entire film (“This Is 40”) around them. It’s here that Mann proved herself as a deceptively complex actress, elevating not only Rudd’s game but Apatow’s as well. We can’t wait to see where these two goofballs go next.

John Krasinski and Emily Blunt were already a beloved celebrity couple before collaborating on 2018’s “A Quiet Place.” Fans were understandably taken aback by Krasinski’s directing talents, but the element that sold the premise was the couple’s chemistry as they played a fictional couple onscreen. Krasinski used it to ratchet up the emotional stakes, and the final act death scene feels all the more devastating because we’re watching someone lose their real-life partner.

Charming as Krasinski can be, Blunt carries the film on the acting front. The film’s best scenes rely heavily on her ability to sell an otherwise ludicrous premise, and she delivers time after time. It’ll be interesting to see how the duo progresses the franchise themes with “A Quiet Place Part II,” but given their command of the material, we’re confident they can go two for two.

Ben Stiller’s parents made up the comedy duo Stiller and Meara, so it only fits that he’d cast his wife Christine Taylor in most of his comedies. Stiller and Taylor met on the set of the unaired pilot for “Heat Vision and Jack” in 1999 and would go on to marry the following year. Their commercial breakthrough came with 2001’s “Zoolander,” the cult comedy that saw Taylor play the straight woman to Stiller’s titular doofus.

The couple had playful chemistry, and their dynamic worked so well that Stiller retooled it for “Tropic Thunder” (2008). Stiller and Taylor hit a rough patch with “Zoolander 2” in 2016, though the film may have fared better if Taylor had a more significant role (her absence is one of many issues). They announced their separation in 2017.

Tim Burton and Helena Bonham Carter are a perfect artistic match. Their styles are so well complemented that one wonders how they didn’t work together before “Planet of the Apes” in 2001 (the year they married). Granted, “Planet of the Apes” was a bad start, and the duo has hit creative lows elsewhere, but when they hit the right notes, there is absolutely nothing they can’t do.

Carter landed a Golden Globe nomination for her stellar turn in “Sweeney Todd” (2007), while her tender vocal performance in “Corpse Bride” (2005) enlivened Burton’s moody animation. The two have not worked together since their 2014 divorce, but it’s safe to say that we’re better off for having seen these patron saints of paleness collaborate as often as they did.

Collaboration: “Revolutionary Road”
​
Sam Mendes and Kate Winslet are heralded in their respective fields, and, for many years, fans questioned whether the spouses would ever collaborate on a project. They married in 2002, but it wasn’t until “Revolutionary Road” in 2008 that we got to see the director-actress partnership in action. The results did not disappoint.

“Revolutionary Road” is a scathing look at American values in the 1960s, and Mendes’s work on “American Beauty” (1999) and “Road to Perdition” (2002) made him the perfect director to explore domestic unrest without going overboard. Winslet gives one of her finest performances as a woman at the end of her rope, and the rawness of her scenes hints at the level of trust that she and Mendes had built up. Both earned Golden Globe nominations, with Winslet winning for Best Actress in a Motion Picture Drama.

The couple divorced in 2011, though they continue to co-parent their son Joe Alfie Winslet Mendes.

Collaborations: “Meet Me In St. Louis,” “The Clock,” “Ziegfeld Follies,” “Till the Clouds Roll By” & “The Pirate”
​
The marriage between director Vincente Minnelli and actress Judy Garland was famously rocky, with both parties reportedly succumbing to affairs. That said, their creative partnership was unrivaled in the realm of Hollywood musicals, and they churned out some of their best work during the years in which they were married (1945-51).

Minnelli had an innate understanding of Garland’s appeal, and he not only capitalized on her wholesome image with classics like “Meet Me In St. Louis” (1944) and “The Pirate” 1948) but pushed her to new dramatic heights with a rare non-singing role in “The Clock” (1945). Garland brought humanity and grace to Minnelli’s fantastical worlds, grounding them in such a way that they felt relatable to the viewer.

If Minnelli and Garland’s five collaborations aren’t enough to dazzle, then one need only look at their daughter Liza Minnelli, who took home an Oscar for “Cabaret” (1972) and established herself as musical royalty in her own right. Not a bad legacy to leave behind.

Collaborations: “Stromboli,” “Europa ’51,” “We, the Women,” “Journey to Italy,” “La Paura” & “Joan of Arc at the Stake”
​
The affair between director Roberto Rossellini and actress Ingrid Bergman was among the biggest scandals in Hollywood history, primarily due to Bergman’s reputation as a wholesome star. The scandal forced Bergman to retreat to Europe, where she and Rossellini married in 1950. They collaborated on several films together, many of which were stark, unflinching, and challenging in ways that Bergman’s Hollywood career had not allowed. Predictably, they resulted in some of her best performances.

“Europa ’51” (1952) and “Journey to Italy” (1954) are masterful explorations of grief and marriage, the former of which was highly controversial due to its frank discussions about suicide. Rossellini’s talents as a storyteller meshed perfectly with Bergman’s compassionate presence. Together, they held such a stranglehold on the “neo-realist” movement that Federico Fellini and his wife were forced to create an entirely different style to compete (more on them later).

Rossellini and Bergman divorced in 1957, but their daughter Isabella Rossellini would further their cinematic legacy with a strong career of her own.

Collaborations: “Fortunes of War,” “Look Back In Anger,” “Henry V,” “Dead Again,” “Peter’s Friends” & “Much Ado About Nothing”

Kenneth Branagh and Emma Thompson were two of the most immense acting talents coming out of Britain in the 1980s, so it should come as no surprise that they collaborated on a staggering run of critical and commercial hits. They first joined forces on the BBC series “Fortunes of War” (1987), and by the time they worked on “Henry V” in 1989, they were married. Branagh’s pomposity and ambition as both a director and actor were always balanced out by Thompson’s charming eccentricities, regardless of whether they were playing love interests or not.

“Dead Again” (1991) is a prime example of the couple’s unique appeal. Branagh plays a detective who’s trying to help Thompson’s character recover from amnesia, and their contrasting approaches (coupled with their stellar American accents) make each scene feel unpredictable and lively. The couple divorced in 1995, though both were linked through memorable roles in the “Harry Potter” franchise in the 2000s.

Federico Fellini was a director who consistently toed the line between fantasy and reality. His best films blend the two in such a way that the joys of life are euphoric, and lows are unbearably grim. None of his performers understood this dichotomy as well as his wife, Giulietta Masina. She burned up the screen from the moment she appeared in Fellini’s debut, “Variety Lights” (1950), and she would go on to give some of the most heartbreaking performances in all of cinema with classics like “La Strada” (1954) and “Nights of Cabiria” (1957).

Masina’s face was her greatest asset, and she was able to convey more through silent expression than some actresses would be able to with an entire script. It’s telling that Fellini’s films without Messina, even masterpieces like “La Dolce Vita” (1960), lack the tenderness that she brought to the table. She was the heart of his work, as evidenced by the fact that they collaborated up until their deaths in the mid-1990s.

Collaborations: “Blood Simple,” “Raising Arizona,” “Miller’s Crossing,” “Barton Fink,” “Fargo,” “The Man Who Wasn’t There,” “Burn After Reading,” Hail, Caesar!” & “The Tragedy of Macbeth” (upcoming)
​
Joel and Ethan Coen have directed some of the most distinctive and rewarding films of the last several decades, and much of this idiosyncrasy comes from the legendary Frances McDormand. Joel Coen and McDormand married in 1984, which is fitting given that it is the same year as their joint film debut, “Blood Simple.” McDormand shines in this demented film noir, just as she would in the small parts scattered throughout cult favorites like “Raising Arizona” and “Barton Fink.”

That said, it was “Fargo” (1996) that solidified Joel Coen and McDormand as an all-time director/actor partnership. The latter took home the Oscar for Best Actress, and rightfully so, given that she elevated the film to classic status. McDormand never gives the same performance twice, and Joel Coen has been only too happy to challenge her each time out. Her upcoming turn as Lady Macbeth in “The Tragedy of Macbeth” (2021) looks to be yet another unpredictable triumph, proving that these two will be making great films till death do them part.

What are some of your favorite married actor/director pairings? Have you seen “A Quiet Place Part II” yet? If so, what did you think? Let us know in the comments section below or on our Twitter account.