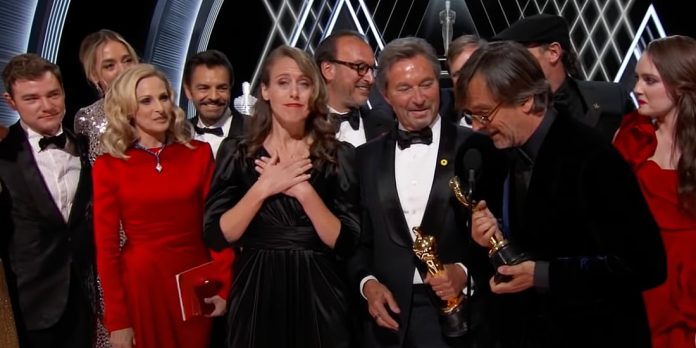 ​Countless words will be written about how “CODA” pulled off its heartwarming Best Picture victory and about how it is the most unprecedented winner of our lifetime. Almost every statistic that had held over the last 80 or so years would back that up, as movies that only get three overall nominations, no below-the-line nominations, and no DGA nomination could never even come close to winning Best Picture until this moment. But in another context, a win for a film like “CODA” over a film like “The Power of the Dog” is somewhat right on schedule.

The next few weeks, months, and perhaps even years will bring out rants and backlash about how a conventional, crowd-pleasing, and not quite “artsy” movie like “CODA” could possibly beat a more “highbrow” film like “The Power of the Dog” – especially after the Academy went the highbrow route for two years running by picking “Parasite” and “Nomadland.” But in the preferential ballot era, having two straight critical darlings win it all before going back to form with a more Academy-friendly Best Picture every three years is pretty much the way things are run these days.

This pattern really started back in 2012, when “Argo” became the safe, universally liked choice for Best Picture after the more divisive “Zero Dark Thirty” tumbled out of contention. At that point in time, it capped off a run of three straight years where a more Academy friendly movie beat a critical favorite, after “The King’s Speech” caught “The Social Network” in 2010 and “The Artist” held off the likes of “Moneyball,” “The Descendants,” and “The Tree of Life” in 2011. However, things started to change in 2013 when “12 Years a Slave” held off the more fantastical “Gravity,” then continued in 2014 when the somewhat unconventional but still actor and showbiz-friendly “Birdman” upset the even more experimental critics sweeper “Boyhood.”

2015 was somewhat of a return to business as usual for the Academy, at least by comparison. “Spotlight” wasn’t exactly presented and handled like a traditional newspaper movie or a traditional movie about exposing a historic scandal. But compared to the far rougher and chillier “The Revenant” and the respective hyperkinetic madness of both “The Big Short” and “Mad Max: Fury Road,” it made “Spotlight” look like the conventional alternative. Like “Argo” three years earlier, “Spotlight” became the universal favorite almost every Academy voter could get behind, even if it was the more old-fashioned choice compared to its top competitors.

This three-year pattern repeated itself to a greater extreme in 2016, 2017, and 2018. “Moonlight” broke barriers with its Best Picture upset over the more toe-tapping Hollywood love letter “La La Land,” regardless of how it was announced. A year later, “The Shape of Water” became another Best Picture winner, the likes of which few had ever seen before, if not to an equally serious degree. At the very least, the Academy had broadened its usual Best Picture standards and definitions to a startling degree two years running – before it decided to overcorrect in an even more startling fashion.

As many are aware, and as some still haven’t stopped ranting about three years later, “Green Book” took the Academy back to its usual Best Picture tastes and then some in 2018. Even though the Netflix backed “Roma” looked poised almost all season to be a third straight artsy and experimental Best Picture winner, it settled for Best Director while the conventional to a fault “Green Book” caught it in the end by winning for Best Picture, Best Supporting Actor and Best Original Screenplay. In spite of seeming to take two steps forward in 2016 and 2017, the loudest “Green Book” detractors proclaimed that the Academy took one giant step back in return.

And now here we are again in 2021, just as we were in 2018 and 2015. Once more, the Academy took two steps forward in 2019 and 2020 by choosing the far from traditional “Parasite” and “Nomadland” as Best Picture winners. Once more, in 2021, a Netflix critical darling and early award season juggernaut with a future Oscar-winning director was set to make it three in a row, only this time it was “The Power of the Dog” and Jane Campion instead of “Roma” and Alfonso Cuaron. But once more, a far broader and far more Academy voter-friendly darling stormed the season at the very end instead, only this time it was “CODA” instead of “Green Book.” Yet to those furious over something as seemingly simplistic as “CODA” beating the seemingly far more challenging “The Power of the Dog,” it’s basically the same thing all over again.

Of course, unlike “CODA,” “Green Book” actually got nominated for more than three Oscars and got into the DGA field as well. And unlike “Roma,” “The Power of the Dog” earned far more nominations and lost in every single one of them except Best Director. Unlike “Green Book,” “CODA” has a few more people on Film Twitter ready to defend and praise it, at least for the moment, until the backlash really kicks in.

“CODA” is still unlike any Best Picture we have ever seen due to its mostly deaf family of main characters and its stats-shattering method of victory. In a way, it is almost like “Spotlight” in how it won in a way no film has for decades; only “Spotlight” did it by winning only Best Picture and Best Original Screenplay after losing in several more categories. “CODA” also matched “Argo” in winning just three Oscars overall; only “Argo” at least won a below-the-line category in Best Editing to go along with Best Picture and Best Adapted Screenplay. What’s more, “Argo” at least got nominated in a below-the-line category as well.

“CODA” did not win in the same way “Green Book” did, even if their end results almost completely matched up. It didn’t win like “Spotlight” did, as “Spotlight” won one less Oscar and didn’t have to rally over a heavy early favorite like “The Power of the Dog.” It didn’t win as “Argo” did either, especially since the only snub “Argo” had to overcome before sweeping the industry awards was in Best Director. Nevertheless, to those who spend a lot of time complaining about the Academy’s Best Picture tastes, these victories are all the same – in that a more typical, traditional, and less ambitious movie beat a more high minded favorite and erased two straight years of the Oscars going in the other direction for once. Yet this time around, the wins for “CODA” were part of a larger trend against high-minded critical darlings in general. Aside from Campion’s Best Director win and “Drive My Car’s” Best International Film victory, which were each pre-ordained for months, the entire night was dedicated to lighter fare and lighter performances winning.

Between all the “CODA” wins, traditional biopic leads Will Smith and Jessica Chastain defeating the biggest critical winners of the season in the lead categories, “Belfast” scratching out a Best Original Screenplay win over “Licorice Pizza,” “Encanto” defeating the more decorated “The Mitchells vs. the Machines” for Best Animated Film, and some pointed jokes at how no one supposedly saw or finished both “The Power of the Dog” and “The Last Duel,” the entire ceremony played like a massive middle finger towards artsy movies in general.

Whether it was due to the pandemic, war, or any other sign of our dark times, the 2021 awards season wound up being a complete and total rejection of dark – or some would say more challenging – fare, in a way not even 2018, 2015 or 2012 wound up being. Maybe that makes a year like this more of an outlier compared to other recent seasons, and not just in all the stat breaking. But in all honesty, artsy critical darlings aside from “The Power of the Dog,” “Licorice Pizza,” and several international films had kind of an off-year this awards season anyway, while so-called crowd-pleasers had their biggest season in years with the likes of “CODA,” “Belfast,” “King Richard,” “West Side Story” and many more even before the “CODA” surge.

For those concerned about such things, recent patterns point to 2022 – if not both 2022 and 2023 – being a comeback year for more unconventional Oscar fare. After all, “Spotlight’s” victory was followed by “Moonlight” making history the next season, just as “Green Book’s” controversial win was balanced out by “Parasite’s” widely cheered triumph a year later. As such, those bitter about “CODA” now could well cheer the loudest when its successor wins Best Picture – whether it’s Martin Scorsese’s “Killers of the Flower Moon,” Damien Chazellle’s “Babylon,” a total wild card like “Everything Everywhere All at Once,” or an entirely different groundbreaking film we can’t see coming right now.
Either way, if the so-called “Two steps forward, one step back” pattern for Best Picture can hold a while longer, the next so-called step forward is just eleven or twelve months away.