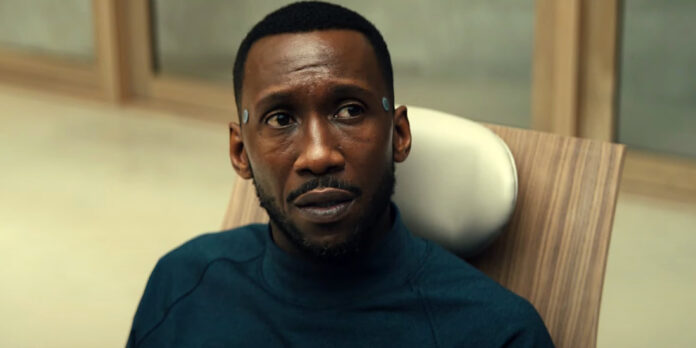 THE STORY – A loving husband and father diagnosed with a terminal illness is presented with an alternative solution by his doctor to shield his family from grief.

​​​​Two-time Academy Award winner Mahershala Ali has been such a notable screen presence for the past five years that it is difficult to believe his role in Benjamin Cleary’s “Swang Song” is his first leading role in a feature film. But here we are, and with two Oscars to his name already, “Swan Song” shows us he is just getting started, offering his best performance to date.

The film, which is a touch of “Black Mirror,” “Ex Machina,” with a splash of a heartfelt love story, is effectively a two-hour acting reel for Ali, allowing him to express an astonishing array of emotions through the course of portraying two characters. The camera lovingly hones in on his face, allowing him to communicate so much through subtle changes in expressions throughout a given scene, revealing far more inner character work than the screenplay’s dialogue ever could. Of course, Ali is afforded large scenes of heightened emotion, too, otherwise known as the “Oscar clips.” He nails the live-wire emotional scenes, especially his final scene, which will likely leave even the most cold-hearted viewers sniffling and wiping tears from their faces.

Of course, for a film that aspires to be a thought-provoking sci-fi, the fact that all one might walk away thinking about once the movie is over is Mahershala Ali’s extraordinary talent is a bit of a problem. The concept for “Swan Song” is an intriguing one: what if you could replace your dying self with a healthy clone complete with all of your memories without your loved ones ever knowing so you can save them the pain and grief of your death?

Director Benjamin Cleary (Academy Award winner for Best Live Action Short film “Stutterer”) sets the film up as though it will explore the murky morals involved in such a situation. After all, the cloning process is carried out in an isolated, slightly sinister lab, spearheaded by a stoic Glenn Close, who emphasizes that Ali’s character Cameron must not consult his wife (played very well by Naomie Harris) and child about whether or not they would like to keep a clone instead of embracing his death. Could a clone ever really replicate you and be an adequate replacement for your family? Is maintaining this sort of secrecy from your family ethical?

Unfortunately, Cleary has decided from the start that the answer to these questions is “yes” and instead stages the film as a sort of 5 stages of grief exercise for Cameron. That option makes for a sufficiently weepy ending, but the process of getting there is often dull and repetitive. There are teases, moments where the film allows you to think it’s going in a more exciting direction, but no, it circles back to settling for a sentimental exercise in grief. Cleary’s visual language is bland despite minimalist and inventive production design that presents a genuinely believable vision of the future. He shoots the film in an uninspired indie style, with handheld camerawork for the flashbacks and lots of shallow focus. Jay Wadley’s score is evocative, but Cleary punctuates it with intrusive needle drops throughout.

And yet, despite these flaws, there is so much in the film that wins you over. One cannot emphasize enough just how compelling Mahershala Ali is in this. He is a force of nature. The early scenes in which he faces off against his clone are electrifying, giving us two Mahershala Ali’s for the price of one. Some of the film’s flashbacks are remarkably effective. In particular, Ali’s meet-cute with his future wife involving a misunderstanding surrounding a bar of chocolate is creative, entirely believable, and adorable. Harris’s character is underwritten, but she sells her love for Ali’s character so believably that you remain invested in their relationship, and her performance is instrumental in making the final scene hit as hard as it does. If only we had more of her, even without exploring the film’s deeper concepts, the tearjerker angle could have still been more impactful. You’ll cry by the end as is. But with more background and substantial exploration of the film’s themes, we could’ve cried harder. Awkafina is underused as another terminal cancer patient who Cameron meets to understand his own situation better. Still, her very few scenes are at least touching, with decent chemistry between her and Ali. Her character is just one of the many reminders of more interesting directions the film could have gone.

“Swan Song” contained so much potential to be a new thinking man’s sci-fi classic. The cast and their performances are so much stronger than what the screenplay deserves. Cleary’s earnestness is evident, which makes for a decent tearjerker but so much in the film feels like a missed opportunity to get at something more profound. Thankfully, Ali’s dual performance makes this a worthwhile endeavor. His first leading man turn is also his best performance to date, further showcasing why he’s one of the best actors working today.