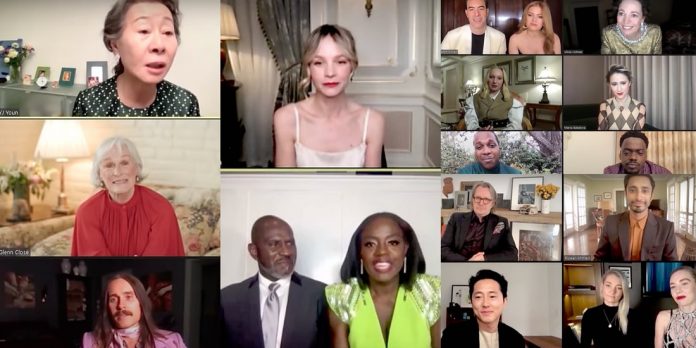 ​The 27th annual Screen Actors Guild (SAG) Awards are over. With just three weeks to go until the Academy Awards, these awards gave some much-needed clarity to the Oscars race. A couple of actors continued their winning streaks, two actresses gained ground, and Ensemble brought a challenge to the Best Picture race. Let’s dive in to see how the SAG Awards could impact the Oscars.

​BEST ACTOR AND BEST SUPPORTING ACTOR ARE LOCKED UP
Let’s start with the easy ones. Chadwick Boseman and Daniel Kaluuya won their respective categories, continuing their flawless precursor runs toward the Oscars. There’s no doubt, nor has there ever been, that Boseman will win a posthumous Academy Award for Best Actor for his performance in “Ma Rainey’s Black Bottom.” There are simply no true competitors who might siphon away enough votes, despite Boseman being the only Best Actor nominee who doesn’t appear in a Best Picture nominee. Some may point to Anthony Hopkins as a formidable contender for his career-best work in “The Father,” but there’s just no way the Academy will skip over Boseman.

Following his Globe and Critics’ Choice wins, Kaluuya solidified his frontrunner status with the SAG win tonight for his tremendous work in “Judas And The Black Messiah.” Not so long ago, it seemed like Sacha Baron Cohen was on his way to the Oscar win in Supporting Actor for “The Trial Of The Chicago 7,” but Kaluuya has scored all the big wins so far. With Cohen snagging an Ensemble win tonight, along with the relatively strong Academy support for “Borat Subsequent Moviefilm,” there’s still a small chance that Cohen could snag a surprise Oscar win. Still, while I can’t say he’s as locked as Boseman, Kaluuya is in very good shape to win gold, especially considering he’s nominated at BAFTA while Baron Cohen is not.

BEST SUPPORTING ACTRESS CLARITY?
I’m not sure there’s ever been a Supporting Actress race as up in the air as this one. With the Golden Globe going to Jodie Foster for “The Mauritanian,” (Foster failed to score an Oscar nomination), and BAFTA only overlapping with two of the nominees, this category has been anyone’s game for a while now. Tonight, Youn Yuh-jung, the only nominee from a Best Ensemble nominated film (“Minari“), snagged the win. She’s also BAFTA nominated, along with Maria Bakalova for her breakout role in “Borat Subsequent Moviefilm.” In a race this tough to predict, the best bet is to go with the SAG winner, where there’s some solid overlap with the Academy. Heading into the Oscars, Youn’s SAG win feels much stronger than Bakalova’s Critics Choice win.

Needless to say, it’s far too hasty to say that Youn has this race in the bag. Bakalova could still win BAFTA potentially. Even so, Close’s overdue narrative could kick in and give her the upset at the Oscars despite no major precursor wins. While this race could certainly go in any direction still, Youn’s SAG win, along with the broad Academy support for “Minari,” gives me the confidence I need to predict her for the Oscar.

VIOLA DAVIS WINS HER SIXTH SAG AWARD
Viola Davis won an impressive sixth SAG Award tonight and her fifth individual win for her work in “Ma Rainey’s Black Bottom.” While Best Actress hasn’t been as up in the air as Supporting Actress, it’s now become just as an exciting and tough-to-predict race. Andra Day won the Globe for her performance in “The United States vs. Billie Holiday” but wasn’t nominated at SAG, nor is she nominated at BAFTA. Carey Mulligan won the Critics Choice Award for her knockout performance in “Promising Young Woman” but missed a BAFTA nomination despite it being home turf for her. Much like Bakalova, it feels tough to predict someone to win an Oscar with only a Critics Choice Award win. Complicating things further, Frances McDormand hasn’t scored a major win for her work in the Best Picture frontrunner “Nomadland,” but she’s BAFTA-nominated and there is an opening there for a win with Day, Davis and Mulligan all absent. So does Davis’s SAG win mean she’s winning the Oscar? It’s a bit more complicated than that, unfortunately.

Davis is in a strong position, to be sure, but she and Andra Day both have a lot working in their favor at the moment. Both play music legends from the early 20th century. Both have a major, televised win. Both benefit from the fact that only one black woman has ever won Best Actress, Halle Berry, in 2001 and voters may feel that the time is now to add to that list. Neither has a film nominated for Best Picture, though Davis’s film is nominated for five Oscars. “The United States vs. Billie Holiday” certainly doesn’t benefit from its poor critical reception, but Day has received unanimous praise for her role in the film. It’s a legend (Davis) versus an ingenue (Day).

Since Davis didn’t technically win over Day at SAG, I’m leaning toward Day winning the Oscar. It’s the sort of performance that the Academy has been eating up recently (Renee Zellweger and Rami Malek being two prime examples). This is an exciting race that will keep us guessing until the envelope is opened, especially if McDormand wins BAFTA.

“THE TRIAL OF CHICAGO 7” WINS BIGGEST – I MEAN BEST ENSEMBLE
Though it’s not too much of a shock, “The Trial of the Chicago 7” won Best Ensemble at the SAG Awards last night. It’s a film that seems to have been destined to win this award from the outset, and there’s no denying it’s a phenomenal ensemble. Still, many (including myself) had predicted that “Minari” would come out on top, given SAG’s track record over the past few years and the way that film has surged as of late. So what does this mean for Best Picture?

To be honest, I don’t think it means much of anything. “Nomadland” has steamrolled this season, will certainly win DGA and has a strong shot at winning at BAFTA. While “1917” won many of the same awards and failed to win the Oscar, this year doesn’t have a film comparable to the phenomenon of “Parasite” to shake things up. Yes, “The Trial of the Chicago 7“ won SAG Ensemble, just like “Parasite,” but it certainly isn’t comparable in many other respects (it even lost the WGA for Best Original Screenplay, an award which “Parasite” won). “Parasite” surged and overperformed with Oscar nominations, while “The Trial of the Chicago 7“ missed some key nominations including Best Director for Aaron Sorkin. So, this win is nice for “The Trial of the Chicago 7“ but doesn’t shake my confidence in even the slightest when it comes to predicting “Nomadland” to win Best Picture. Unless something insane happens, like Chloe Zhao losing DGA, I think it’s safe to consider this Best Picture race over.

While the male categories feel pretty secure, it’s exciting that the female categories are so up in the air. We truly won’t go into the Oscars with any confidence of who will win either category. Still, all four individual acting categories went to people of color for the first time in SAG history, an incredible achievement worth celebrating. It’s never happened in Oscar history either. Here’s hoping the Academy will follow suit. We’ll find out in just over three weeks as this elongated Oscar season finally comes to a close.

How do these awards affect your Oscar predictions? Do you have any gut feelings about Actress or Supporting Actress? Let us know in the comments below or over on our Twitter account. Be sure to listen to our immediate reactions to the show on the podcast here and check out our latest Oscar predictions here.