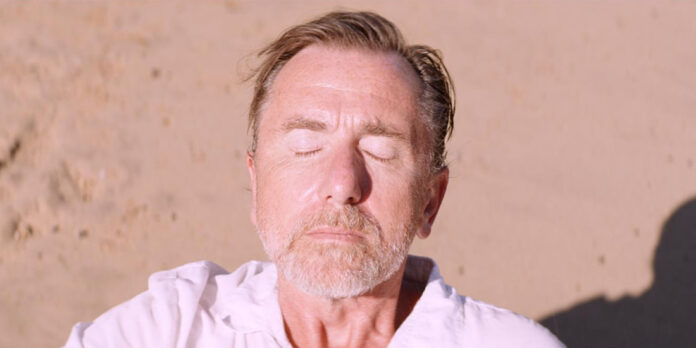 ​​​Writer-director Michel Franco’s new film is the opposite of a feel-good movie. Even though it involves situations in which I’ll likely never find myself, the world that “Sundown” creates around its main character is so bleak and continuously depressing that it left me feeling decidedly down once it was done. Whether this is a testament to the effectiveness of the director’s vision or an argument for it being an exercise in off-putting, maximal nihilism probably depends on what you want to get from your movies.

Neil (Tim Roth) is a wealthy Englishman on vacation in Mexico with his family (Charlotte Gainsbourg, Samuel Bottomley, and Albertine Kotting McMillan). An emergency cuts their trip short, but Neil tells a lie to stay on in Mexico by himself rather than accompany his family back to England. We watch him as he floats through his unplanned alone time, all the while spinning further lies to his sister about being unable to leave the country.

Franco doesn’t reveal much about the characters with explicit exposition. Instead, we learn things when Franco deems them necessary, no matter how far into the movie we may be. This leads to a disorienting effect, wherein relations and character details that are assumed to be one thing turn out to be completely different. This manages to mimic the hazy, careless way that Neil has suddenly decided to live his life. In the same way that he needs to be reminded about what’s important to his family, the audience is only told such things when it becomes essential for other characters to express them to Neil. Franco imbues his filmmaking with subtle moments of direction such as this that aren’t even noticeable right away.

The film also manages to squeeze in a minor exploration of how rich people go through life differently than most. Because of the luxuries that his wealth makes easily attainable, Neil can take plenty of things for granted and make decisions that would ruin most people. He can successfully do something that nearly everyone fantasizes about at one time or another: he escapes from his current life and responsibilities and just disappears. And consequently, the stakes for said decisions are much higher because of his fortune and fame. “Sundown” shows extreme wealth to be a devil’s bargain.

Roth plays a shuffling, hard-to-read shell of a man with surprising magnetism. Even though it’s a distinctly inert character, he’s able to imbue him with a surprising degree of weight. It would be easy for Neil to disappear given his lack of momentum in the script, but Roth keeps him intriguing. He earns both our contempt for his actions and our curiosity as to what he’ll do next. Gainsbourg is magnetic in her limited screen time. Her character lets loose all the emotions that Neil is either bottling up or simply not feeling, and she never goes overboard in her portrayal.

Franco’s camera is non-judgmental, almost to a fault. The actions and consequences of his decidedly unlikeable main character are laid out with little commentary from the creator, which only makes the entire endeavor increasingly bleak. It may actually be too grim, as I was left feeling disturbed and depressed, and not necessarily in a way that highlighted anything unexpected about the story. Still, any film that can evoke such a strong reaction is, by definition, an effective one. Whether audiences find “Sundown” enlightening or enraging, it’s sure to leave an impression.