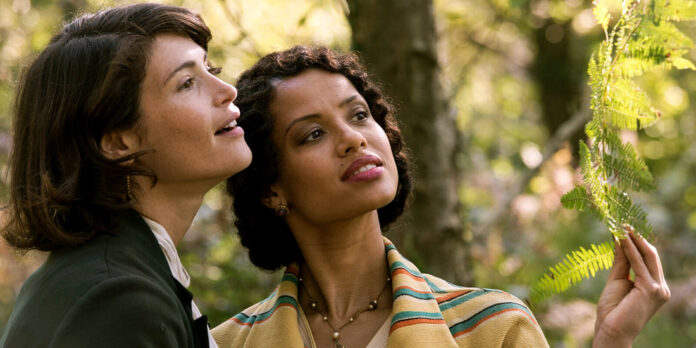 THE STORY – During World War II, reclusive writer Alice has her sequestered life upended when Frank, an evacuee from the London Blitz, is left in her care. Despite initially resolving to be rid of him, Alice finds herself and her emotions reawakened by him.

If you’ve been listening to Taylor Swift’s “folklore” album non-stop and dreaming of cottagecore aesthetics, then “Summerland” is the film for you. Written and directed by London playwright and theatre director Jessica Swale (making her feature directorial debut), it’s a sweet British period drama set during World War II. It might take on a little more than it can handle, but it’s charming and a very solid directorial debut.

The film stars Gemma Arterton (“Their Finest“), who previously worked with Swale in 2016 on the play “Nell Gwynn” in the West End. She plays Alice Lamb, a grouchy academic working on her theses about pagan folklore and myth, and whom the village children believe is either a witch or a Nazi collaborator. She isn’t pleased when a young boy named Frank (Lucas Bond) is dropped on her doorstep – after being evacuated from London because of the Blitz – but the two slowly come to bond over Alice’s work, and in particular, the idea of “Summerland,” a sort of pagan heaven that takes the shape of floating islands.

While the plot may seem saccharine to some, the characters are so engaging that it’s easy to fall into the film’s world. Arterton is delightful as she smokes cigarettes, bangs away at her typewriter, and maps out her theories about Summerland across the walls of her house. She imbues her performance with a lingering sense of melancholy underneath her sharp exterior that pulls the audience in.

Arterton also has lovely chemistry with Bond, who does a great job with the role of the young boy trying to fit into a small village and deal with being away from his parents. It’s this relationship between a woman who never wanted children and the child who’s been foisted upon her that is the heart of the film. As Frank becomes interested in the folklore that she studies, Alice slowly begins to care for him.

As Alice opens herself up to Frank, she has flashbacks to her relationship with a beautiful London socialite and aspiring novelist, Vera. Gugu Mbatha-Raw also starred in Swale’s “Nell Gwynn” when it was at the Globe before transferring to the West End. She’s incandescent in this part, and while it’s a small role, she makes the most of her screen time. Arterton and Mbatha-Raw are charming together and the film isn’t coy about their romance. The audience spends much of the film trying to piece together what happened to them, and Arterton does a great job of bringing across her longing for her lost love.

The film doesn’t fully address just how difficult a mixed-race lesbian relationship would have been at the time. When Alice talks to Frank about her past, she asks him, “Would you think it strange if a woman loved another woman?” He accepts it easily, but she’s quick to tell him that other people think it’s a sin.

The film is full of beauty from Volker Bertelmann’s sweeping score (which uses strings so well) to Laurie Rose’s cinematography – especially his shots of the English countryside. Claire Finlay’s costumes are lovely, particularly the juxtaposition of Alice’s sweaters and trousers and plaid coat with the glitzier clothes that Alice and Vera wear in the flashbacks. Philippa Hart’s set decoration perfectly captures that cottagecore vibe that’s so popular at the moment and it’s hard not to wish that you could move into Alice’s home.

If you liked 2018’s “The Guernsey Literary and Potato Peel Pie Society,” you’re likely to enjoy “Summerland” as well. At under two hours long, it doesn’t overstay its welcome while still feeling like all its storylines are completed. It’s the epitome of a comfort food period drama with characters that are easy to get attached to and beautiful views of the English coast (perhaps especially appealing right now to anyone cooped up in an apartment). Some might find it overly sweet or wish it pushed more boundaries, but the relationships and the ideas that the film shares about love, motherhood, and friendship will be as enticing as the idea of Summerland itself. As Alice says, “People like to have something to believe in.”