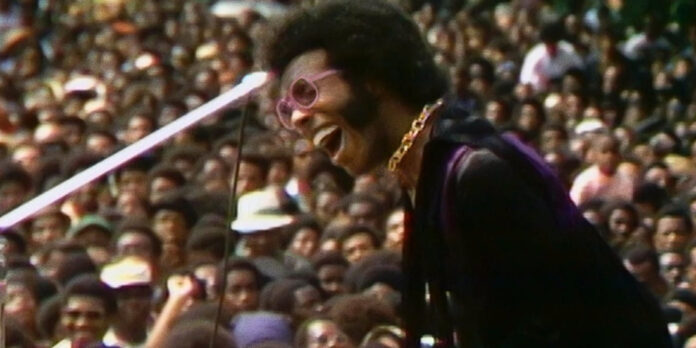 THE STORY – Over the course of six weeks during the summer of 1969, thousands of people attend the Harlem Cultural Festival to celebrate Black history, culture, music, and fashion.​

​There have been plenty of films that attempt to look back in time and amplify moments that may have gone under-reported to provide a larger platform for discovery. It’s common for documentaries to take on such endeavors, and the results are as varied as the topics themselves. Gleaning information from the past is important, but balancing that objective with captivating storytelling is not as simple. When the magic is struck, there’s an electrifying feeling in the air. One recognizes the lesson being taught while also enveloped in the sensation of a compelling narrative. “Summer of Soul” absolutely manages this feat, presenting a thoughtful and joyous examination of a forgotten moment in time. It also happens to be one of the year’s most entertaining and expertly crafted films.

The film focuses on the 1969 Harlem Cultural Festival, an event that predominantly featured live music performances from a vast array of notable Black artists. Like many moments in America’s history, it was a turbulent time on both the political and social fronts. The festival, happening at the same time as other landmark events such as Woodstock and the moon landing, was a celebration of Black talent and culture. What is shown is footage of exuberant performances, as well as the significance of what a showcase meant to the community. It’s a significant event that was never widely seen in the decades that followed, and this momentous occasion is finally being given its due.

What makes this a particularly special piece of cinema is that two layers are operating within the text. The most obvious among them is the music. There’s an impressive list of artists featured here, including the likes of B.B. King, Mahalia Jackson, David Ruffin, Gladys Knight, Stevie Wonder, Nina Simone, and Sly and the Family Stone. While an appreciation for the song selection is an essential foundation for engaging with the film, one would be hard-pressed not to find an immeasurable amount of enjoyment from watching these performances of classic songs. Not every performance is as enthusiastic as others, and sometimes that does contribute to an inconsistently slower pace. However, it’s nearly impossible not to be overcome by the jubilant stage presence of these performers, and it ends up becoming a surprisingly immersive experience that captures the emotion of what it must have been like to witness such an occasion.

The true beauty of this piece is the commentary that lies underneath the surface-level aesthetics. The notions of Black identity connected to significant political movements ring through every soulful performance. As the director, Questlove expertly matches every ecstatic exhibition on the stage with poignant historical touchstones that trace the evolution of activism within the community. The archival footage is often paired with interviews from the people of the time, both attendees and performers, and the emotional responses they give only further highlight the palpable empowerment on display. There’s an ingenious method to encapsulate every musical number with a sort of history lesson, either with the artists themselves or the larger cultural context around them. This endeavor is also aided by the impressive editing used to coalesce all this footage into an inviting piece. What’s presented is an uproarious celebration of communal pride with an emphasis on holding onto what makes a community proud.

The initial goal of “Summer of Soul” seems straightforward. With such a large-scale event seemingly lost to time, the efforts shown to unearth this material are thorough and appreciated. The candid atmosphere that places one right in the middle of this congregation of exceptional talent is a marvelous treasure, and nearly every song is a festive demonstration. Yet, it is the deeper truths explored that give the film so much more meaning. In this undertaking, there’s an analysis of the confluence of Black activism that spoke through artistic expression. It’s a powerfully resonant observation felt in every frame, and the film does a fantastic job at enlightening, entertaining, and empowering every audience that can witness this event. Maybe not in the way it was initially intended, but certainly in an effective method today.