Our Favorite Movies Of 2021 So Far 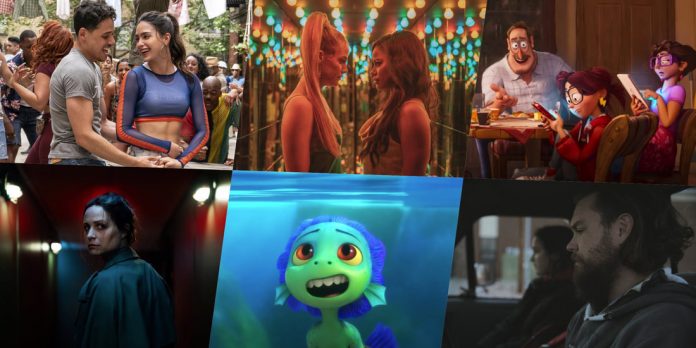 We’re halfway through 2021. As such, it is time to reveal NBP’s rankings of the best films of the year so far. But what do we see as the year 2021? Considering last year’s Oscars had the eligibility window for qualifying films extended two extra months from January 1st – February 28th, there is an argument to be made that films released during that time such as “Judas And The Black Messiah” or “The Father” should qualify. Not so fast. Because we’re an awards website, first and foremost, we’re only counting films released March 1st – June 30th for our own internal team ranking of the best films of 2021 so far. I asked everyone on the team to provide their top 5 films released in that eligibility window, and we came up with the ranking shown down below based on how many times a film showed up on team members’ lists and how high. We urge you to check out these films either in a theater or on streaming (whichever you’re most comfortable with).

Special Mention: Bo Burnham delivered the best piece of art, commentary, entertainment (whatever you want to call it) with his Netflix Comedy Special “Inside.” Although it’s not technically classified as a movie by us, much like “Hamilton” last year, we wanted to mention it before we got to the theatrically released films of 2021. If you have not seen this brilliant piece of work yet, do yourself a favor and head on over to Netflix to watch it right away.

PLOT: Filmmaker Victor Kossakovsky captures natural images of cows, chickens, and a pig and its litter.

WHERE TO WATCH: N/A

PLOT: A young man drafted into South Africa’s military, but he knows he is different and must keep himself hidden. However, when another recruit develops an intimate relationship with them, they are now both in danger.

PLOT: When 26-year-old Anna becomes a gestational surrogate to a single, middle-aged app designer named Matt, she expects only a transactional bit of good karma and the payday that will allow her to finish her college degree. But as Matt’s unbridled enthusiasm for impending parenthood leads him to persistently insert himself into her life and invite her into his, the initially annoyed Anna finds herself reluctantly charmed. The pair of self-described loners gradually open up to each other, give in to the intimacy of their admittedly finite shared experience, and forge an unlikely friendship.

WHERE TO WATCH: Apple TV ​(Rent)

PLOT: As a deadly virus ravages the world, Dr. Martin Lowery embarks on a mission to reach test site ATU327A, a research hub deep in the Arboreal Forest. The arduous journey, guided by park scout Alma, is set back by a nighttime attack that leaves the two bruised and shoeless. When they run into Zach, a man living off the grid, they gratefully accept his help. Zach’s intentions aren’t exactly what they seem, however, and a path out of the forest and into safety quickly fades as the line between myth and science blurs.

WHERE TO WATCH: Apple TV ​(Rent)

PLOT: Film censor Enid takes pride in her meticulous work, guarding unsuspecting audiences from the deleterious effects of watching the gore-filled decapitations and eye gougings she pores over. Her sense of duty to protect is amplified by guilt over her inability to recall details of the long-ago disappearance of her sister, recently declared dead in absentia. When Enid is assigned to review a disturbing film from the archive that echoes her hazy childhood memories, she begins to unravel how this eerie work might be tied to her past.

​15. Rita Moreno: Just A Girl Who Decided To Go For It

PLOT: Talented, energetic, and full of joy, Rita Moreno has been dazzling audiences for over 70 years. Whether showcased on television, film, or stage, her artistry transcends singing, dancing, and acting, as she continuously reinvents herself and pushes creative limits. Moreno is a pioneer and one of the most authentic performers of our time, and she has the EGOT status to prove it.

PLOT: Undine works as a historian lecturing on Berlin’s urban development. But when the man she loves leaves her, the ancient myth catches up with her. Undine has to kill the man who betrays her and return to the water.

PLOT: Zola, a Detroit waitress, is seduced into a weekend of stripping in Florida for some quick cash — but the trip becomes a sleepless 48-hour odyssey involving a nefarious friend, her pimp, and her idiot boyfriend.

PLOT: When Mickey is introduced to Chloe one hot summer night in Athens, the attraction between the pair is immediately palpable — so palpable that before they know it they’re waking up naked on the beach on Saturday morning.

11. Raya And The Last Dragon

PLOT: Long ago, in the fantasy world of Kumandra, humans and dragons lived together in harmony. However, when sinister monsters known as the Druun threatened the land, the dragons sacrificed themselves to save humanity. Now, 500 years later, those same monsters have returned, and it’s up to a lone warrior to track down the last dragon and stop the Druun for good.

PLOT: The true story of a British businessman unwittingly recruited into one of the greatest international conflicts in history. Forming an unlikely partnership with a Soviet officer hoping to prevent a nuclear confrontation, the two men work together to provide the crucial intelligence used to defuse the Cuban Missile Crisis.

WHERE TO WATCH: Flix Sling (Rent)

9. The Killing Of Two Lovers

PLOT: A man desperately tries to keep his family of six together during a separation from his wife. They both agree to see other people, but he struggles to come to terms with her new relationship.

WHERE TO WATCH: Flix Sling (Rent)

PLOT: Sparks is your favorite band’s favorite band, and soon to be yours too. Whether or not you’re aware of it, Sparks likely had a hand in something you’re fond of. This is a band that has been in the background of almost every art form across the last 50 years. Growing up in the ’60s, Los Angeles brothers Ron and Russell got by on a heavy diet of popcorn matinees and pop music until the spotlight of school talent shows illuminated their way on a musical journey that has so far spawned 25 studio albums.

PLOT: Set in the 1970s in London during the punk rock movement, the film follows Estella de Vil, an aspiring fashion designer, and explores the path that will lead her to become a notorious criminal known as Cruella de Vil.

WHERE TO WATCH: Disney+

PLOT: Set in a beautiful seaside town on the Italian Riviera, the original animated feature is a coming-of-age story about one young boy experiencing an unforgettable summer filled with gelato, pasta, and endless scooter rides. Luca shares these adventures with his newfound best friend, but all the fun is threatened by a deeply-held secret: he is a sea monster from another world just below the water’s surface.​

WHERE TO WATCH: Disney+

PLOT: Following the deadly events at home, the Abbott family must now face the terrors of the outside world as they continue their fight for survival in silence. Forced to venture into the unknown, they quickly realize that the creatures that hunt by sound are not the only threats that lurk beyond the sand path.

WHERE TO WATCH: In Theaters & Paramount Plus

PLOT: Markus returns home to care for his daughter when his wife dies in a tragic train accident. However, when a survivor of the wreck surfaces and claims foul play, Markus suspects his wife was murdered and embarks on a mission to find those responsible.

PLOT: While at a Jewish funeral service with her parents, a college student has an awkward encounter with her sugar daddy and her ex-girlfriend.

2. The Mitchells vs. The Machines

PLOT: Young Katie Mitchell embarks on a road trip with her proud parents, younger brother and beloved dog to start her first year at film school. But their plans to bond as a family soon get interrupted when the world’s electronic devices come to life to stage an uprising. With help from two friendly robots, the Mitchells must now come together to save one another — and the planet — from the new technological revolution.​

WHERE TO WATCH: Netflix

PLOT: The scent of a cafecito caliente hangs in the air just outside of the 181st Street subway stop. The likeable, magnetic bodega owner Usnavi saves every penny from his daily grind as he hopes, imagines and sings about a better life.

WHERE TO WATCH: In Theaters & HBO Max

What do you think of our list? Is there anything missing that you would include? Do you feel any of these movies have a chance to be Oscar contenders? What else coming out later this year are you most excited for? Let us know in the comments section below or on our Twitter account.