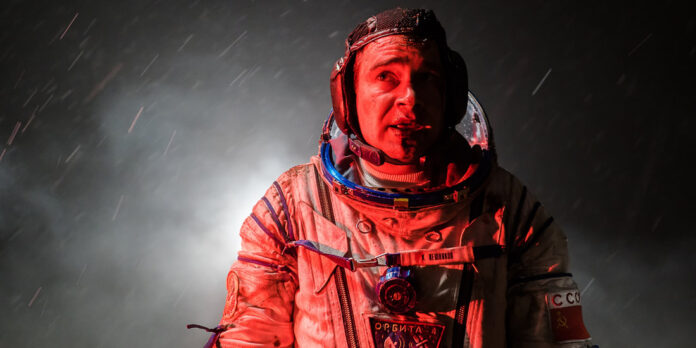 THE STORY – Summoned to a secluded research facility, a controversial young doctor examines a cosmonaut who returned to Earth with an alien parasite inside of him.
​
THE CAST – Oksana Akinshina, Fyodor Bondarchuk, Pyotr Fyodorov & Anton Vasiliev

​​​For as much as there’s a need to watch serious films that tackle important subjects in cinema, there’s also a strong desire to watch movies that simply deliver on pure entertainment spectacle. During these difficult times, those films, which would have been packing theaters, have virtually disappeared. While there has been a robust slate of smaller films that have premiered, there remains a great hunger for content with far fewer ambitions on a storytelling front, and instead indulges in a good thrill. The new Russian creature feature, “Sputnik,” aims to provide just that. It never finds itself reinventing the wheel, but it still manages to be a good watch nonetheless.

Set in 1983, the film starts with a Russian space mission that takes a dangerous turn. The ship carrying two astronauts crashes back onto Earth and the government is keeping their exact whereabouts hidden. Tatyana (Oksana Akinshina), a headstrong and idealistic psychiatrist, is invited by top officials to help assist with the care of the men who have been brought back. Her initial assessment of one of the astronauts, Konstantin (Pyotr Fyodorov), concludes he’s suffering from PTSD. However, once nighttime arrives, something new reveals itself: An alien creature emerges from Konstantin’s mouth as he sleeps. The desperation to find out this creature’s true intentions is underway, all while the danger of its growing appetites increases.

There’s no doubt that many will find easy comparisons to be made with numerous science fiction films that came before. The film borrows tonally from the likes of “Alien” and “The Thing,” though that’s no mark against it. It may play in familiar genre settings, but it’s able to execute an effectively pulpy and tense atmosphere that’s quite effective. Director Egor Abramenko manages to create a setting that dials in on the suspense and doesn’t give in to too many useless jumpscares. Utilizing an impressive creature design along with moody cinematography and a fantastic score, what’s presented is an effectively creepy monster movie that plays right into the strengths of the genre. Nothing here is trying to be revolutionary, but it’s successful in providing a thoroughly entertaining time.

That said, there are certain elements that keep it from being entirely successful. While deep characterizations are not what’s typically sought after in these films, there isn’t a parade of complex characters, and that means a lot of the storytelling ends up being quite shallow. This isn’t as much of a problem until the third act arrives, and unfortunately, it’s here where most of the steam runs out. The chilling unease of the horror soon gives way to more of an action showcase which isn’t as interesting, and the final conclusion is underwhelming. The screenplay is filled with contrivances, but the filmmaking for most of the film is able to compensate for that. This is felt less so in the latter sections where motivations become murky and less engaging. It’s a shame because the ending is what prevents the whole thing from becoming something quite extraordinary, and instead brings it down to a more adequate level.

Performances are another thing that usually don’t get considered that much in these types of films and here it’s mostly acceptable. There’s a forcefulness that Akinshina brings to the central role that does nicely to anchor the piece. There isn’t a lot here from an emotional perspective, but it’s enough to make the character believable in this setting and she delivers a fine turn. Fyodorov brings layers of mystery, intimidation, and tragedy in his performance that feels surprisingly nuanced at times. Again, that’s not to say this is any kind of extraordinary portrayal, but it’s another example of the fine performance that’s perfectly suited to the material. The rest of the supporting cast is decent, but none rise to a level of significance that’s worthy of too much attention.

“Sputnik” is far from a perfect film, even when just looking at it through the lens of its genre. While the characterizations and story developments aren’t much to write home about, it’s really a lackluster finale that stalls the momentum and ceases to be as engaging. Still, that doesn’t ultimately harm too much of what came before. Most of the film is an entertaining watch with an impressive atmosphere of tension that’s perfectly suited for the horror genre. All of that is aided by notable filmmaking and effective performances from the central players. At the end of the day, this probably won’t quench the thirst of the enormous spectacle we’ve been missing lately, but it’s a good place to get something that operates in that same territory.