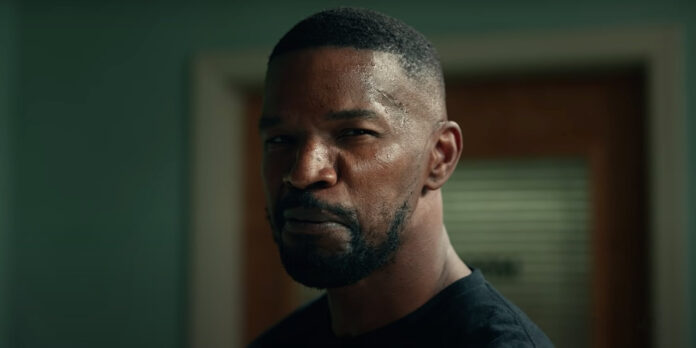 THE STORY – A former soldier teams up with a cop to find the source behind a dangerous pill that provides temporary superpowers.

​Who doesn’t like a good pitch? Take an illegal pill that gives you superpowers for only 5 minutes? Sounds awesome! Craft a story around it with interesting characters? Not so easy apparently, as “Project Power” never fully realizes its original and unique concept all the way through due to a weak script that sacrifices those main driving factors for audience investment for slick visuals and exciting setpieces instead.

Taking place in New Orleans, “Project Power” attempts to put a new spin on the superhero genre by introducing the plot element that a mysterious new pill on the streets is being illegally sold that gives you superpowers for five minutes. The powers are unique to each user and no one knows what will happen until they actually take it. You could develop bullet-proof skin, increase your speed, embrace elements of fire or ice, become super fast, or even become invisible. Like any drug, it can be quite deadly and as a result, crime starts to escalate leading to a local cop (Joseph Gordon-Levitt) teaming up with a teenage dealer (Dominique Fishback) and a former soldier fueled by a secret vendetta (Jamie Foxx) to find the source of the pill and put an end to “Project Power.”

This project never thoroughly finds its footing as it starts off clunky in its character introductions (Who’s the protagonist? Who’s the antagonist? What does everyone want?) and only continues to get worse from there. The occasional action scene or exciting chase sequence gets the adrenaline pumping but unlike Netflix’s other summer blockbuster film this year, “The Old Guard,” not enough time is spent on the worldbuilding for this film’s concept. There is also a distressing absence of characterization and as a result, caliber actors such as Jamie Foxx and Joseph Gordon-Levitt feel wasted despite an abundance of screen time. Add this to the forgettable “Sleepless” and “Robin Hood” category of Foxx’s career instead of the work that truly highlights his best qualities as an actor like the criminally under-seen “Just Mercy.” And while it’s nice to see Joseph Gordon-Levitt back after taking a break from acting following “Snowden” (he’s quite good in “7500” which was released on Amazon earlier this year), this is also another mediocre addition to his filmography. Dominique Fishback is the only member of the cast who is able to slightly rise above the material she is given but even then, “Project Power” is too focused on what its next dazzling visual effects moment will be rather than what it’s next character-centric moment will be that pushes the story forward. No one is delivering a memorable performance. I probably couldn’t even tell you any of the character’s names or defining attributes once this movie was over.

Awkward line-readings, a bad sense of pacing and rhythm, if this were a normal year, we probably wouldn’t be paying “Project Power” any mind at all. Due to the COVID-19 pandemic, there has been a shortage of big summer blockbusters with kinetic action and visual effects. While Netflix’s latest offering might be able to deliver on that front, everything else never wholly comes together to create anything compelling or memorable. It’s the literal definition of a “movie of the week” lacking in any form of power.