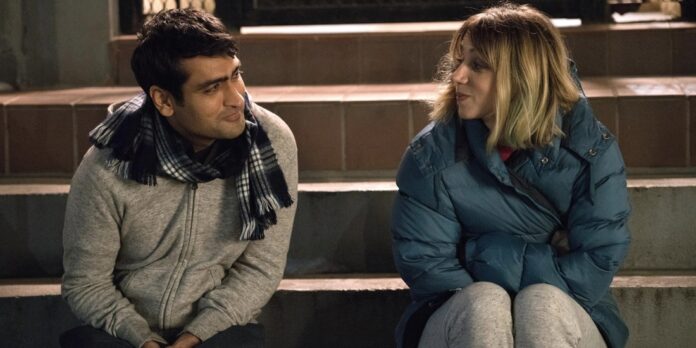 THE STORY – Kumail is a Pakistani comic who meets an American graduate student named Emily at one of his stand-up shows. As their relationship blossoms, he soon becomes worried about what his traditional Muslim parents will think of her. When Emily suddenly comes down with an illness that leaves her in a coma, Kumail finds himself developing a bond with her deeply concerned mother and father.

I don’t think it’s an overstatement to say that “The Big Sick” is one of the best romantic comedy films I have ever seen, joining the ranks of “500 Days Of Summer,” “Eternal Sunshine Of The Spotless Mind,” and “When Harry Met Sally.” Like those films, “The Big Sick” shines a light on its people and the relatable emotions they experience in life. In a genre that is often ridiculed for obeying the status quo & much like how Kumail Nanjiani goes against the expectations of his own family, “The Big Sick” is a modern day example of how the romantic comedy genre can still surprise and simultaneously appeal to our hearts.

“The Big Sick” takes place in Chicago as stand-up comedian Kumail Nanjiani (Played by Kumail Nanjiani) one night meets a girl named Emily (Zoe Kazan). What starts off as a simple one-night stand, turns into a serious relationship between the two. However, while Emily is telling her parents Terry (Ray Romano) and Beth (Holly Hunter), who live in North Carolina, about Kumail, the same is not be reciprocated by him. Kumail comes from a Pakistani family (Zenobia Shroff plays his mother, while Anupam Kher plays his father and Adeel Akhtar plays his brother) that very much believes in arranged marriage and they are working actively to match their son with a suitable wife. When Emily finds out that Kumail has been keeping this from her she breaks up with him and goes about her life until an unknown infection puts her into a medically induced coma. While still having strong feelings for Emily, Kumail makes his way to the hospital to be by her side. There, he meets Emily’s parents for the first time despite their hostility towards him and eventually contemplates risking his own relationship with his family in an effort to be with the woman he loves.

“The Big Sick” is packed with a tremendous amount of emotion and yes, lots of laughs. One of the elements which makes it so appealing though is how well it incorporates the jokes into the serious and often very touching love story between two culturally different types of people. The jokes don’t feel pre-written nor are they overly elaborate in terms of their set-ups and punch lines. They also don’t contain that trademark raunchy Judd Apatow humor, stuffed with dick jokes and other various gags to push along the story. The story is centered around a comedian and naturally, that means there is laughter and levity from the more serious aspects of the story. However, “The Big Sick” is something unique. It’s something special. Perhaps it’s because it feels so real and intimate, being based on the true life story of how star Kumail Nanjiani met his wife (And co-writer on this film), Emily V. Gordon. Whether you know that they wrote a screenplay based on their own story is irrelevant to how one will enjoy “The Big Sick.” It certainly makes sense while watching it though as to why the humor is a little rough around the edges, the tenderness comes off a bit awkward and the jokes sound like something your buddy said last night.

“The Big Sick” may be a movie but at its core, it’s a true story about real people who behave and act like real people. As a result, their decisions bring the story into very interesting directions. By the time it was over, I had a huge smile on my face and wanted nothing more than to watch it again to spend more time with these characters. Nanjiani, a comedic actor who you might have seen here and there in a few movies over the past few years but most will recognize him from HBO’s “Silicon Valley,” has never been any better than he is in “The Big Sick.” Kumail and Emily, as a couple, might go down as my favorite romance of 2017. Their playfulness, intimacy, honesty, and chemistry is off the charts fantastic. While it would make sense from Kumail’s perspective because he actually lived through the experience, Zoe Kazan meets him every step of the way. If their relationship wasn’t enough, Ray Romano and Holly Hunter also get a rewarding, well thought out and at many times, what feels like an “all too real” relationship. The two actors don’t show up until 45 minutes into the movie, but within the time they are given, both Romano & Hunter are equally terrific as the older couple who have their own issues they are working through and it’s not because of any giant character flaws. No one in this movie is considered the antagonist or is a “bad person.” These characters are all good people who have imperfections because such is the way of life. There are some who may look at Kumail Nanjiani’s family as a sort of antagonist who prevents our lead characters from ending up together due to their cultural tradition of arranged marriage. One undersung feature of “The Big Sick” which I’m sure will not get signaled out as much as it should, is how much it humanizes Kumail’s family, shines a light on Pakistani culture and helps us to at the very least understand their perspectives better.

I could go on continuously about how Michael Showalter keeps the pace of the movie moving, even as it explores uncharted territory for the romantic comedy genre. I could go on and on about Kumail and Emily’s writing and how the actors portray their characters as realistically as possible. In the end, “The Big Sick” shows us how every moment feels precious and authentic, big or small. How every moment is but a tiny piece of this random mess we call “life” and how it is meant to be cherished. “The Big Sick” is full of many of these moments and as a result, it too deserves to be cherished.